After a Colossal $7 Million Expansion, Victoria’s Four Pillars Reasserts Itself as a World-Class Gin Destination

Shrouded by a striking copper veil, it’s a sight to behold. The original cellar door struggled to keep up with demand as soon as it opened in 2015. Now, it’s tripled capacity – and it should be at the top of your hit list. 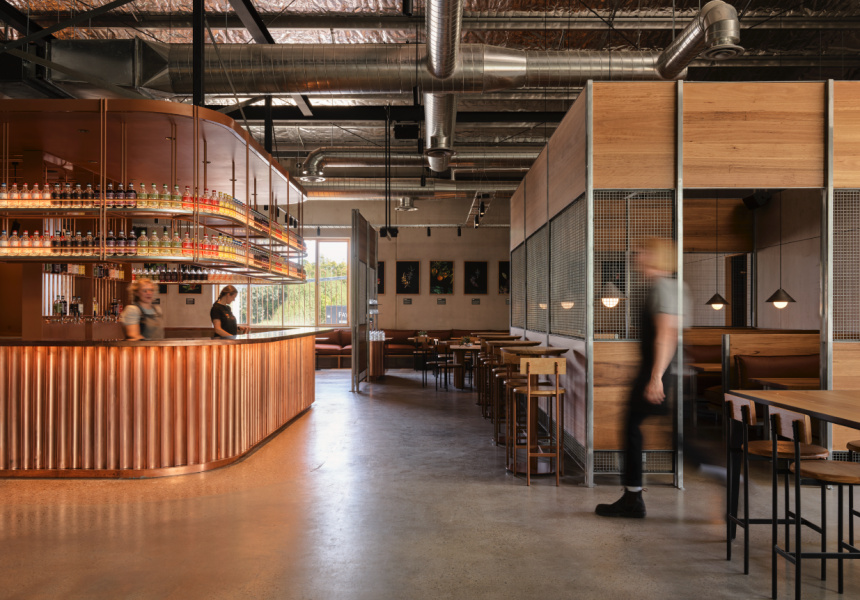 Four Pillars was an instant hit when it opened its distillery to the public in 2015, drawing droves of gin lovers to Healesville in Victoria’s Yarra Valley. But its popularity was a double-edged sword. “We outgrew [the space in] almost week one,” says distiller Cameron Mackenzie, who co-founded the award-winning and now internationally acclaimed brand in 2013 with Stuart Gregor and Matt Jones. “Midweek it manages … but weekends it’s just been queues out the door for years.”

A sight to behold, the exterior of the new 1000-square-metre building is shrouded by a striking copper veil. But it’s about more than just aesthetics; the 1650 metres of raw copper tubing cools down water from the distillation process. It’s one of many sustainable steps Four Pillars took to earn the title of Australia’s first certified carbon-neutral gin distillery in Australia earlier this month. Awarded by Climate Active, it only goes to businesses that have reached zero net emissions.

The entrance courtyard sits between the new and old buildings, bisected by what the team is calling a “chai river” – a Wonka-in-miniature moat of spent cooling liquid from the stills, with a chai-like aroma.

Turn right to find the original Wilma’s Stillhouse bar, which will be familiar if you’ve visited Four Pillars before. A sixth 2000-litre still will arrive later this year.

Turn left and you’ll be in Beth’s Bar, named (as all the new spaces are) for one of the gin stills. The design – by Victoria’s award-winning, sustainably minded firm Breathe Architecture – combines Australian hardwood, upcycled concrete and bricks, and burnished copper. It’s spacious in a way next door could never be, with banquettes, bar seating and a huge porthole to the packaging line below.

On offer is the full gamut of Four Pillars gin (piped directly into the bar to reduce glass waste), gin-centric cocktails and tonic on tap, made specifically by Strangelove for the distillery. Food-wise, star chef Matt Wilkinson – behind Four Pillars’ popular Made From Gin range – has worked with Caroline Gray to hone the small, gin-focused menu. “The idea is that the gin is the star of the show,” Gray says. “This is just a little bit of carb-loading.” You might find duck-liver pate with Bloody Shiraz Gin jelly from City Larder or Olive Leaf Gin-cured salmon with local Bear Bagels. Opening later this year is a weekend-only tuckshop that’ll be serviced by local businesses.

Beyond Beth’s is Jude’s Gin Garden, a lush, industrial-look indoor-outdoor space surrounded by trees and adorned with the botanical plants – like lemon myrtle, Tasmanian pepperberry and juniper – that contribute so much to Four Pillars gins.

With room for 300 people across the gin utopia, there are now more opportunities for bookable gin masterclasses and meet-the-maker sessions. The extra space also means extra production capacity, with Four Pillars now capable of churning out more than a million bottles of gin a year – a win for a brand making waves not only at home, but globally; it was crowned International Gin Producer of the Year in 2019 and again in 2020 at the annual International Wine & Spirit Competition in London.