Whether you’re a pét-nat pro or an amber amateur, this new service brings you excellent vino selected by former Noma and MoVida sommeliers. Monthly subscriptions start at $75, and if you’re lucky you’ll score a “lottery bottle” from the owner’s private cellar. 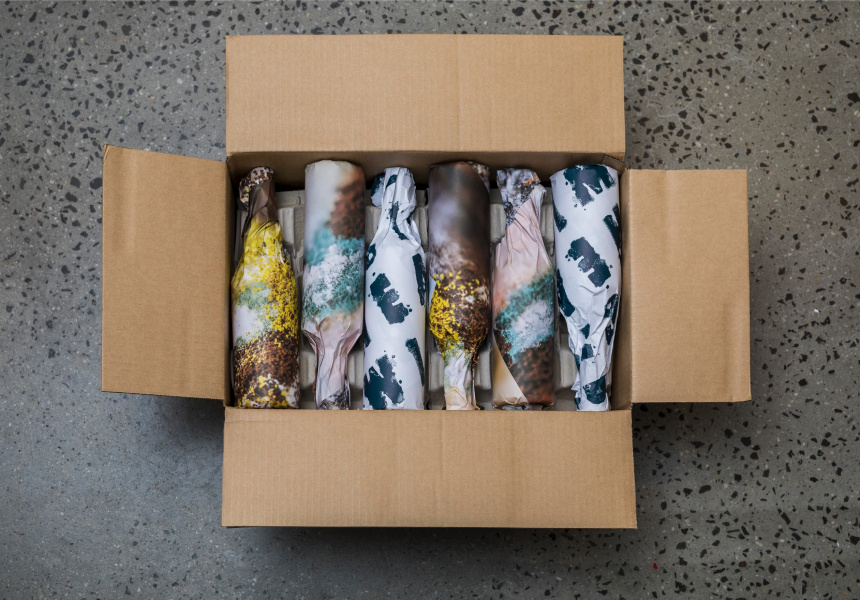 Photography: Courtesy of Act of Wine
by Evan Jones
Share

Minimal intervention, skin contact, méthode ancestrale – natural wine comes in many forms. Such wines are often rustic in flavour, sometimes cloudy in appearance, and come in juice-like colours on a spectrum ranging from muted ambers to Starburst cherry-reds. Natural wines are increasingly popular, but the uninitiated might feel like they’ve missed the boat. Just knowing where to dip your toe in (so to speak – mouths are more suitable) can be the biggest barrier.

That’s where Sam Fitzsimmons comes in. From his Southbank wine shop Act of Wine, Fitzsimmons has launched a natural-wine delivery service of the same name.

“I get really excited about trying these wines initially,” he says. “And then getting to share them with everyone who subscribes makes me really happy.”

The service works like this: each month, Fitzsimmons convenes a wine panel of industry pros to decide which drops go into the monthly subscription packs. In that past that’s included former Noma sommelier James Audas (who now runs a wine import business called Lo-Fi), Liz Carey (who was behind the wine program at MoVida for six years), importer Ryan Larkin and Jay Comeskey, who co-founded the now-closed Town Mouse.

The bottles that arrive at your door are all made sans chemicals, and are created using sustainable, organic and biodynamic farming practices. They’re vegan-friendly and okay for those with sulfite sensitivities – not to mention delicious.

Subscribers can choose to receive three, six or 12 bottles each month (priced at $75, $150 or $300 respectively); Fitzsimmons says each bottle retails for around $30 to $40. He’ll also slip in one pricier “lottery bottle” (in the $100 range) each month – occasionally selected from his own cellar – from producers such as France’s Jean-Yves Péron or Austria’s Christian Tschida.

Subscribers can expect a mix of regions and styles in each pack, too. A mixed selection might feature Patrick Sullivan’s Jumpin Juice Yellow, a skin ferment sauvignon blanc with tropical pineapple notes; a 2017 La Biancara Garg’n’go, a rustic sparkling from Italy’s Veneto region; and a 2017 Les Terres Promises L’Antidote, a chocolatey carignan from Provence.

The wines are delivered in pretty boxes, and each bottle is wrapped in beautiful paper with an abstract design that incorporates Act of Wine’s logo (which was created by design agency Robyn & Leon, who grew mould out of letter-shaped yoghurt to achieve the effect). But you can opt out of the fancy packaging in favour of plain, recycled materials from the store if you’d prefer a more sustainable option.

For Fitzsimmons, the appeal of natural wine lies in its representation of the people and places that shape its creation. “They’re more a showcase of the land and a time,” he says. “You can drink something and it can transport you somewhere else.”

This article first appeared on Broadsheet on September 11, 2019. Some details may have changed since publication.