Projected to be a $600 billion global industry by 2020, these local designers want in. 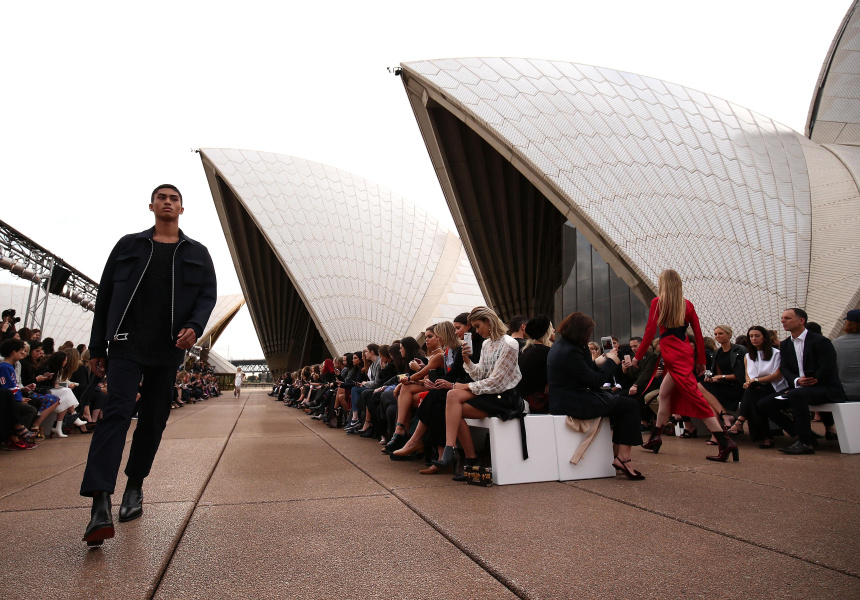 When Victorian-era social commentator Thomas Carlyle said, “As others dress to live, he lives to dress well”, he was referring to the dandy: a 19th-century fashion rebel who sported top hats and cravats and skirted the edges of high society. Today, the man who lives to dress well is far less arcane. He shares runways with women and moves with the seasons of Gucci, Tom Ford and Saint Laurent.

By the time Fashion Week wrapped in Sydney in May, Dion Lee had unveiled his first menswear collection, which commanded even more gasps in the audience than his womenswear. Men walking for Strateas. Carlucci had padded down the runway in crimson-velour tracksuits and purple stockings. And unisex reigned supreme at Double Rainbouu and Ten Pieces. In mid-June, the Australian Fashion Chamber and The Woolmark Company sent eight local menswear designers to the prestigious Pitti Uomo showings in Milan.

Never before has such attention been paid to menswear in Australia. As we catch up to the global market – which is heading to reach $615 billion in revenue by 2020 – we are not only witnessing an upward spike in sales figures, but also shifting attitudes towards masculinity and style.

In Australia, sales of menswear rose 3 per cent in 2015, outpacing the 2 per cent growth in sales of womenswear, according to Euromonitor.

“The global fashion conglomerates already started this process of expanding and investing into menswear over a decade ago,” says Robert Ferris, the head buyer at high-end retailer, Harrolds. “But in Australia, men have only recently changed their approach to fashion.” He adds that while the luxury holding giants – such as Kering, Richemont and LVMH – continue to shape global trends, there is more room today for emerging and independent designers to flourish.

Three of which are P.E. Nation, Double Rainbouu and Strateus. Carlucci, which all presented their spring/summer collections at Pitti Uomo.

As fashion week wrapped, P.E. Nation co-founders Pip Edwards and Claire Tregoning announced the launch of a menswear collection to complement their best-selling activewear range for women. The first collection, which launched in 2016, sold out in just a few hours. “I have been across menswear for a long time, from my days at Ksubi, to my time as design director at General Pants,” says Edwards. “Streetwear has seen a massive comeback – in my eyes, it never left – and now with the revival of heritage street sport, it’s quite a fitting time for P.E. Nation to launch menswear.”

Michael Nolan, one half of the single-category resort-wear label Double Rainbouu, has also cashed in on the menswear movement. The concept is coltish, irreverent and incredibly niche. And it’s designed to be worn by men and women, regardless of print or style. But where unisex lines received a pushback from buyers during Nolan’s days at Ksubi, heavyweight stores such as Opening Ceremony and Barneys snapped up the printed Hawaiian shirts within the first few months of launching. He believes it’s down to having honed an offbeat yet decisive concept that helps buyers to “wedge us easily into the seasonal mix”.

While Double Rainbouu’s unisex shirts draw in more men than women, Mario-Luca Carlucci and Peter Strateas (Strateas. Carlucci) explore androgyny through separate menswear and womenswear collections. “We don’t design collections based around gender,” says Carlucci. “Rather, we base them on a concept.” The garments are not unisex but, just four years since launching, the compelling clash of effete and machismo has earned them a place on the high-end global circuit and a string of prestigious design awards.

The clothes themselves offer a means of expression that is at once daring and indulgent – like Nolan of Double Rainbouu, Carlucci believes this has to do with men starting to make style choices based less on utilitarianism and more on risk and play.

“It was not so long ago that men were quite self-conscious in terms of what they could and could not wear,” says Carlucci. “But I think today, as stereotypes continue to collapse, men are taking greater risks and being more adventurous with how they dress.”

Perhaps we’ve reached a point where guys can finally go to the pub wearing bubble-gum-pink Hawaiian shirts, head-to-toe velour and spandex skins. Perhaps not. But for someone who has built a brand around the idea of taking life a little less seriously, Nolan thinks it would do us all good to burn the rule book and go our own way.

“I think for sure we need to have a little more fun in men's fashion. It's been pretty safe for a long while, and there are just those times when you want to feel good and be a little lighthearted. When you dress for fun, there's a sense of release, and we could all do with a little more of that right now.”