The Voice of Indigenous Fashion Design Gets Louder 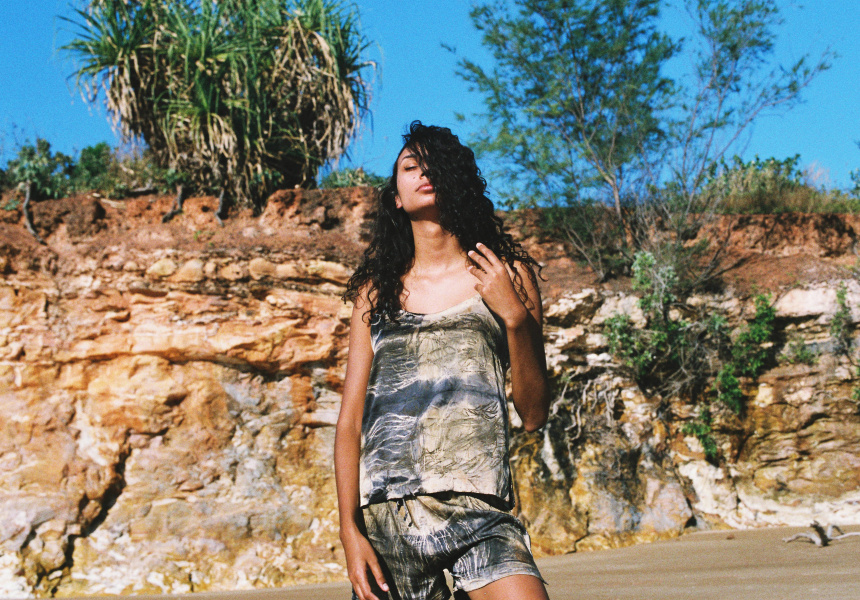 Earlier this year, Chanel made headlines for its $2000 boomerang. The fashion label was criticised for disrespecting Indigenous Australians and for partaking in cultural appropriation. Nathan Sentence, an Indigenous project officer at the Australian Museum, said the boomerang was an example of how western society tries to simplify Indigenous Australian culture and knowledge into “cliché objects.”

In June this year Istanbul-based designer Bunyamin Aydin was criticised for being culturally insensitive when he featured “tribal”-inspired face paint, dot paintings and references to 1788 (the year Europeans arrived in Australia) at his fashion label – Les Benjamins’ – runway show.

In 2012, American label Rodarte came under fire for profiting from Aboriginal-inspired prints without the involvement of any Aboriginal artists. The house later revealed it had licensed the prints through appropriate channels, but critics pointed out the label still hadn’t credited the artist's work.

But there are ways to thoughtfully and meaningfully collaborate with the country’s first peoples in fashion, without monetary and cultural exploitation.

Below is a mix of Indigenous-run fashion labels and designer collaborations with Indigenous artists and not-for-profit fashion businesses that are producing truly exciting work.

Haus of Dizzy
With its optimistic graphics and political charge, Kristy Dickinson’s bold laser-cut jewellery has found a cult following; it now counts Sydney’s MCA and Melbourne Museum as stockists. The Indigenous designer holds marriage equality and justice for Aboriginal people particularly close to her heart. “I just went to an exhibition at the Melbourne Museum and saw a heap of photos of Indigenous people holding up “Vote Yes” signs [leading up to the 1967 referendum to include Aboriginal people in the census],” says Dickinson. That wasn’t long ago. Now gay friends are going through this.”

Dickinson is proud to make jewellery celebrating her identity and that of her community. On one of her earring designs the word “DEADLY” is spelled out in the colours of the Aboriginal flag. Other pairs read “SISTA GALS” (made for the Tiwi Islands’ Sistagirls’ first Mardi Gras this year); “LOVE IS LOVE”; “INNER WEST SIDE”; and “BOSS BITCH”. Dickinson’s glittery designs also cover dozens of cute motifs including palm trees and lighting bolts.

North
The founding mission of this Australian-made homewares and clothing label is to support Indigenous textile designers. North products are made from prints and fabrics bought from a number of Indigenous art centres, ensuring money gets invested back into the community of artists.

The label’s silk sleepwear is dyed using traditional techniques by the Anindilyakwa women who live across the Groote Eylandt Archipelago. The dreamy, textured prints show splashes of inky blues, etchings of burnt orange and cloudy blotches of eucalyptus green. Each set’s print is different.

“The dying process begins with a bush trip that draws on ancient knowledge of country to find and collect roots, leaves, bark and berries,” says North Home’s communications manager, Amy Nicholas. “Back on community at Angurgu or on the beach at Umbakumba, these are boiled in a big drum on a campfire while the women wrap the silk carefully around leaves and found objects.” You can see the process in this video.

Magpie Goose
Electrifying prints are at the heart of this Northern Territory-based social enterprise, whose clothes feature all manner of vivid colours. Magpie Goose began in April 2016 after founder Maggie McGowan (a former lawyer) fell in love with the work she saw in art centres, which she regularly visited during her time working in legal aid in remote Indigenous communities.

Magpie Goose uses screen-printed fabrics from art centres in the Top End. Then the clothing is cut and sewn in Sydney. Simple shirts, dresses, pants and tops carry the important artistic styles, cultures and stories of the various communities that create them.

The collection has been available for pre-sale but will be available in-store at Craft Victoria in late October.

Aje x Minnie Pwerle
Sydney-based label Aje has just begun dropping its resort 2018 range, Awelye, into stores around Australia and David Jones. It features the work of late Indigenous artist Minnie Pwerle. A number of the artist’s paintings were photographed then digitally printed onto silk linen for this collection. Exaggerated ruffle dresses depict the artist’s vibrantly coloured lines and circular shapes, some abstracted by fabric manipulations and others left to stand on their own.

The collaboration was initiated over social media by Pwerle’s great granddaughter, Jade Torres, who runs the Pwerle Gallery. “I not only had the opportunity to represent original artwork of my family members, but I wanted to have a stronger message to the public regarding Indigenous culture,” says Torres. “What better way than through fashion? Fashion is worn by women globally. It’s another way to admire Minnie Pwerle’s artwork.”