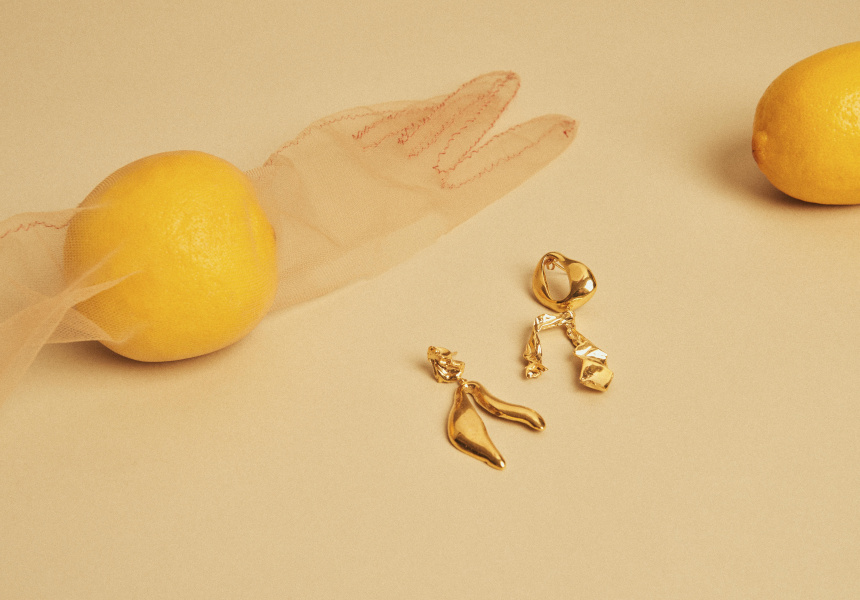 For her latest collection, In Two Minds, these polarising threads come together in single, sculptural pieces.

“In my work, there are a lot of organic shapes and a lot of structured forms,” says De Marchi. “I really wanted to see where they intersect and how that relationship works, to tease it out and… see if they can be harmonious in the one object.”

The result is an impressive collection of sculptural rings, droplet pendants, stone “dangle” earrings and statement chokers in distinctive shapes and forms. The natural world supplies many of the collection’s names including crater, valley and lake.

De Marchi handmakes each piece of jewellery at her Carlton North studio using lost-wax casting, which is an ancient technique where objects are moulded from an original form. De Marchi uses sterling silver, which in some cases she later plates in 18-carat gold.

Each piece begins life as a study made from paper and clay, or as found objects such as stones and pebbles, which she then casts into silicone moulds. “I might make a shape out of clay, and then I make 25 more shapes that look almost identical but then have a tiny difference in terms of scale, different elements or flourishes or where things are protruding,” she says, noting no two pieces are the same.

Those forms resemble the kinds of natural, unstructured shapes that made Romanian sculptor Constantin Brâncuși and German-French sculptor Jean Arp icons of 20th century art. Both are prominent influences on De Marchi’s work. “They make beautiful largescale forms that have that an organic, bulbous quality,” she says. “That’s something I always like to focus on.”

For In Two Minds, the work of Melbourne-based artist Zoe Croggon also served as muse. “I’m a big fan of her work,” says De Marchi. “She creates these images that are a collage of contrasting images – there might be someone dancing with a mountain-scape, and she’ll create this beautiful intersection of them/ I’ve always thought about how that could work in terms of jewellery.”

A trip to Europe in 2018 was another rich source of inspiration for the designer. “I found Athens so inspiring in a way that I didn’t expect. It has such a rich history and I stumbled across an incredible market where they sold antiques and artworks – I brought home a lot of different objects,” she says. She also returned with 40 or so pebbles that she’d collected on an Athens beach, one of which found their way into her designs. “I laid them all out and one of them ended up making it into the collection, forming the base of a pair of dangle earrings.”

(De Marchi also acquired some new fans on her trip. Her luggage, packed with clay and other tools, caught the attention of customs officials at an Italian airport who were soon flipping through her notebook of designs. “They started picking out the designs they liked and didn’t like,” she says. “They started following me on Instagram,” she says, laughing.)

The campaign for In Two Minds was shot by Danish photographer and De Marchi’s close friend, Jesper Hede, who has worked with De Marchi on the past five By Nye campaigns and has played a pivotal role in the label’s evolution.

The campaign imagery features editorial shots as well as still lifes of the jewellery, show with gloves by Helena Dong, an RMIT Fashion Design Graduate.

"I wanted to be able to create a campaign that allowed for both a refined and unrefined aesthetic to sit cohesively in the same space," says De Marchi, who art-directed and styled the campaign herself. "Having images that are more abstract and playful sit alongside polished portraits captures what In Two Minds is all about."

In Two Minds is now available online, or at various stockists. 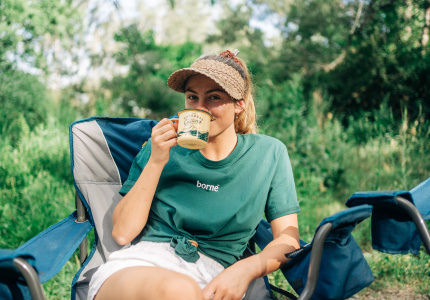 Find Beautiful, Handmade Australian Jewellery in One Place via House of Matilda