Most acne creams just treat the symptoms, not the cause. This one is different – it employs an antibacterial formula recently developed for washing wounds and body cavities in surgical settings. It’s backed up with cleansing products, skincare advice and a supportive community. 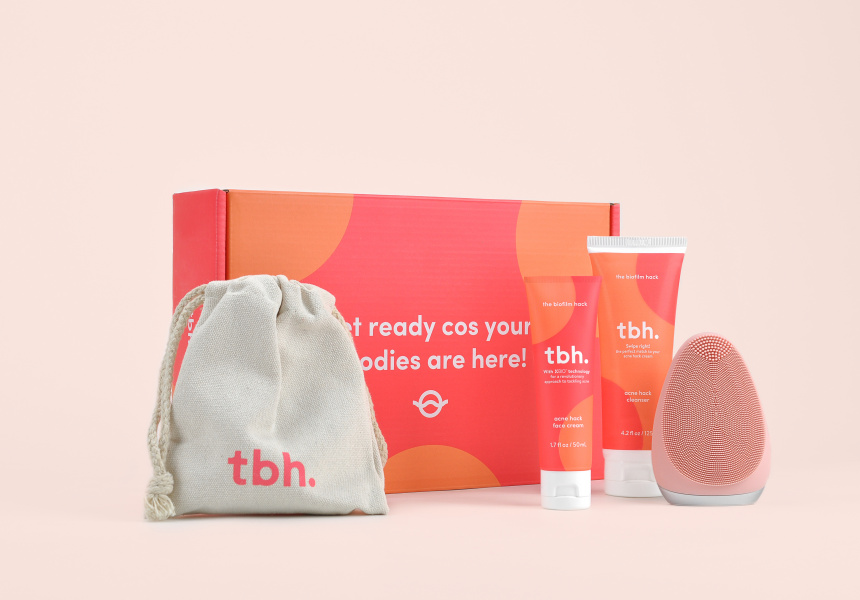 Treating acne can be a disheartening, years-long process of trying new meds or topical treatments and hoping to wake up and see the results. Many treatments deal with the symptoms of acne – such as angry red spots – but don’t kill the bacteria that cause it.

A new Australian acne treatment, by TBH Skincare, has been showing promising results by first targeting the defensive, matrix-like structures that surround acne-causing bacteria, known as “biofilms” (which can be antibiotic- and immune-resistant), then the bacteria itself.

Biofilms pose a significant challenge in hospitals and other medical settings, where they can cause persistent, hard-to-beat infections. Effective biofilm treatments are at the cutting edge of biomedical science, and are being pursued by several new companies with success.

One of those companies is Australia’s Next Science, founded in 2012. It makes anti-biofilm wound gels and surgical lavages (solutions for washing body cavities). TBH, which stands for “the biofilm hack” but also “to be honest”, employs the same technology.

“When I had acne I lost all my self-confidence,” says Rachael Tyers, who co-founded TBH with her mum, Bridget Mitchell, and struggled with breakouts as a teenager and young adult. “It was treated as such an aesthetic thing and people would say, ‘Oh, it’s just pimples,’ or ‘Oh, it’s just breakout and it will go away,’ and it almost didn’t feel valid that it was affecting me so much deeper than [that].”

Tyers has taken Roaccutane in the past for her skin and had just come off an unsuccessful round of antibiotics when a family friend offered her a new, unbranded cream to try. She noticed a change in her skin within two weeks of using it each day, and says she was stoked to get consistent positive results after about 100 days.

“For me, stress plays a major role in my breakouts, so I found between using the cream consistently and managing my stress through different wellness tools and techniques, I was really able to get my skin under control,” she says. “There are so many contributing factors when it comes to acne, so not everyone will be the same.”

The formula in that cream – which actually came from Next Science – is now found in TBH’s overnight “acne-hack” cream. It has a three-pronged effect. First, it uses citric acid to break down biofilm’s extracellular polymeric substance (i.e. a jelly-like matrix that forms between the individual bacteria cells) and inhibits it from reforming with sodium citrate dehydrate. A third agent, the salt benzalkonium chloride, kills the bacteria by drawing the water from them in a process called “osmotic shock”.

By creating TBH, Tyers, who has a background in digital marketing, wanted to share the science-based solution to her skin woes with others, while also acknowledging the emotional toll of managing acne-prone skin.

“[Treating acne] can be so clinical and that whole emotional aspect seems to be stripped out of the experience,” she says.

In line with its secondary name, “to be honest”, the brand doesn’t photoshop its models or test on animals. Its products come with cards featuring positive affirmations and mental-health tips. Customers are also encouraged to share their experiences on social media.

The core product is the cream, which works best when applied each night before bed but can also be used effectively on individual blind bumps, or worn under makeup during the day. TBH also sells cleanser and an antibacterial silicone brush for cleaning your face before applying the treatment.

“The acne-hack cream is only applied in the evening, so it’s supposed to be a very simple process of cleanse and apply the cream, then and go to bed type thing,” Tyers says.

We hope you like the products we recommend on Broadsheet. Our editors select each one independently. Broadsheet may receive an affiliate commission when you follow some links.