The Sydney Label Creating the "Perfect Pair of Swim Shorts"

Men’s swim and resort label Commas has just released an exclusive capsule of linen shorts, fun bowling shirts and boardies with matchesfashion.com – taking its beachy aesthetic to the world. 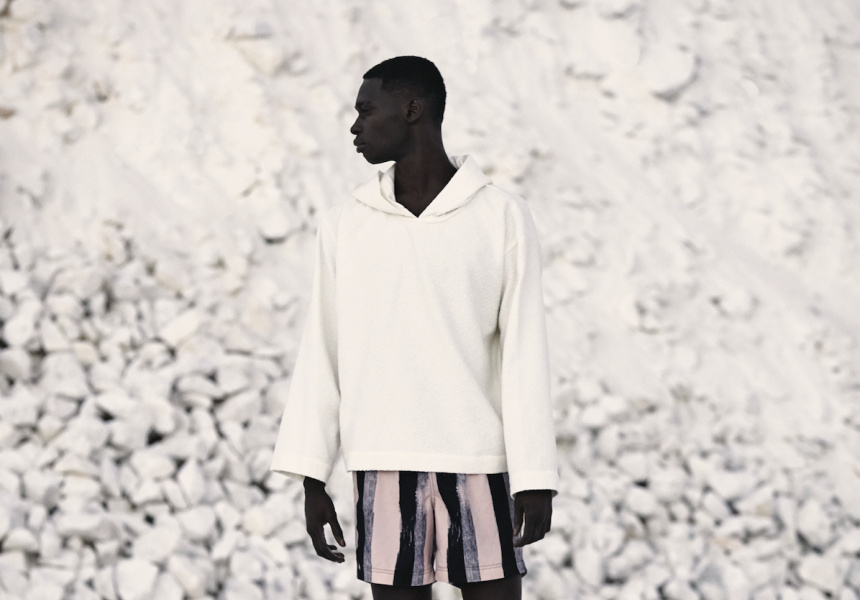 Before Sydney-based Richard Jarman started his resort and swimwear label Commas in October 2016 he was studying his masters in property development. But every time he went to the library he gravitated towards the fashion and architecture journals.

“It made me wonder if my time was better spent exploring my passions and the things I found joy in,” he says. So Jarman, who spends a lot of time at the beach, set out to create the perfect pair of swim shorts. He collected references, travelled to fabric mills and spoke to people in the fashion industry who later became part of his team. At 27 he founded menswear label Commas.

It delivers a contemporary approach to summer dressing with a focus on modern, masculine styles. Tie-front swim shorts are the cornerstone of each collection. They’re joined by printed silk shirts, Italian-linen robes, original printed swim trunks and beach towels.

Like the punctuation mark from which it takes its name, Commas is meant to represent a purposeful pause, says Jarman. The designer brings together luxurious fabrics and relaxed styles, and the label has an overarching sense of ease. The name was selected as a reminder “to catch your breath, to recalibrate, and take pleasure in the moment”.

It’s a combination that proves sucessful locally and abroad. Commas was selected by The Woolmark Company as the first swimwear label to represent Australia at Pitti Uomo in Italy – a country that, alongside the rest of Europe (particularly France and Monaco), has embraced the label. Commas is also making waves in the US; it’s a favourite of American guitarist Steve Lacy. And it has featured on the cover of Esquire in the Middle East. “We’ve grown at a faster speed overseas than we have back home,” says Jarman.

“I think there’s definitely an image of Australia and its swim culture that appeals to an international market,” he says. “The people that have really embraced Commas might also dream of having that lifestyle, or maybe they already have it.”

Around a year ago Commas caught the eye of multinational e-retailer Matchesfashion.com, who signed it pretty soon after its launch. The heavyweight is now championing the label; it’s chosen Commas for an exclusive eight-piece capsule collection as part of its commitment to fostering creative talent around the world.

A seamless extension of the Commas core line, the spring/summer 2019 capsule collection features feather-light original-print silk-blend shirts, which are ideal for holiday dressing; striped “bowling” camp-collar shirts; tie-front swim shorts; and breathable linen shorts in contemporary, wearable styles. For this collection, there has been a shift to a more luxurious colour palette, from rich reds and vibrant mustards to cool blues and pinks. Painterly stripes feature throughout, too.

“We decided to play with ideas that we might not normally in our main collections,” says Jarman. “[Previously,] we’ve created garments that are really aimed at capturing a feeling of timelessness, whereas for this capsule collection we wanted to use colours inspired by this particular moment in time.”

The spring/summer 2019 capsule collection is available exclusively from Matchesfashion.com for a limited time.