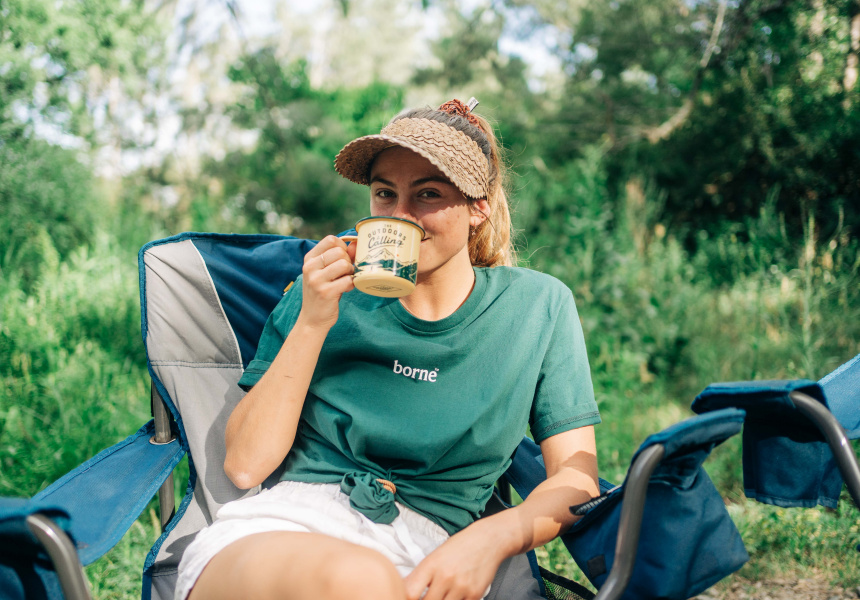 Four students – Tim Keys, Bal Dhital, Daniel Robson and Pat Prell – were thinking of ways to tackle the problem of mosquito-borne diseases around the world, while addressing the persistent mozzies on campus at the University of Newcastle. They came up with the idea to make mosquito-repellent clothing that you’d want to wear to the beach, bush or when camping – and in 2020, Borne Clothing was launched.

“We started off by looking at the data,” says 25-year-old Dhital, who works full-time as a junior doctor while managing the supply chain and partnerships for Borne. “Each year, 700 million people catch a mosquito-borne disease. Of those, 400,000 will die from malaria alone. If that isn’t awful enough, more than half of those deaths are children, which means malaria takes the life of one child every two minutes,” he tells Broadsheet.

They chose the name Borne because of its meaning to carry or transport something, such as disease, but also because they’re trying to “birth” a new line of clothing that solves multiple problems. Borne currently sells five adult T-shirts and two kids’ tees, with other clothing items in the works. And when you buy a $49–$69 tee, 50 per cent of the profits go directly to foundations fighting malaria worldwide.

“Wearing a T-shirt that keeps you safe while keeping others’ safe is a choice that can create real positive social change, and that is something worth striving for,” says Bal. “At the heart of our mission is the belief that our choices matter, and they reflect the world that we want to see growing around us.”

Borne donates half its profits to Nothing But Nets, a campaign that distributes bed-nets, sprays and preventive medications in countries like the Congo and Nigeria. It’s also transparent with its customers about where the clothing is manufactured and treated – currently Belgium, Bangladesh and Vietnam.

Each T-shirt is treated with permethrin, an active ingredient that repels mozzies, ticks, flies and midges. It’s odourless and approved by the World Health Organisation. Borne also says the ingredient will remain effective after 70 washes.

“We established a clear rule that any positive social impact we create shouldn’t come at the expense of the hands and lands our products pass through,” he says. “That meant setting up standards in how we choose our supply chain partners, and making a commitment to being transparent about our process.”

The four co-founders partnered with Newcastle company SD Strategies to help ensure they’re mitigating human rights risks, among other ethical decisions, in the supply chain. Each T-shirt is made in a Fair Wear Foundation-approved factory and made from 100 per cent organic cotton, certified by the Global Organic Textile Standard.

“Over the past month we’ve re-routed our supply chain to cut out close to 20 per cent of our carbon footprint, and over the month before that we started the process of identifying a manufacturer that is closer to us and meets our basic standards. If nothing else, we hope we can be part of a growing movement that pushes the needle in the right direction.” Chunky, Cropped, Colourful and Chaotic – The Cat Who Knits Makes Creative Knitwear From His Living Room and Donates All Profits to Charity How Do You Pronounce Aje? The Aussie Label’s Newest Collection Spells It Out