Alumni from Country Road and Helmut Lang are making jumpers that take more than 40 hours to hand-knit, and that use an exclusive chemical-free yarn developed with a local farm. The result feels like “you’re wearing a cloud”. 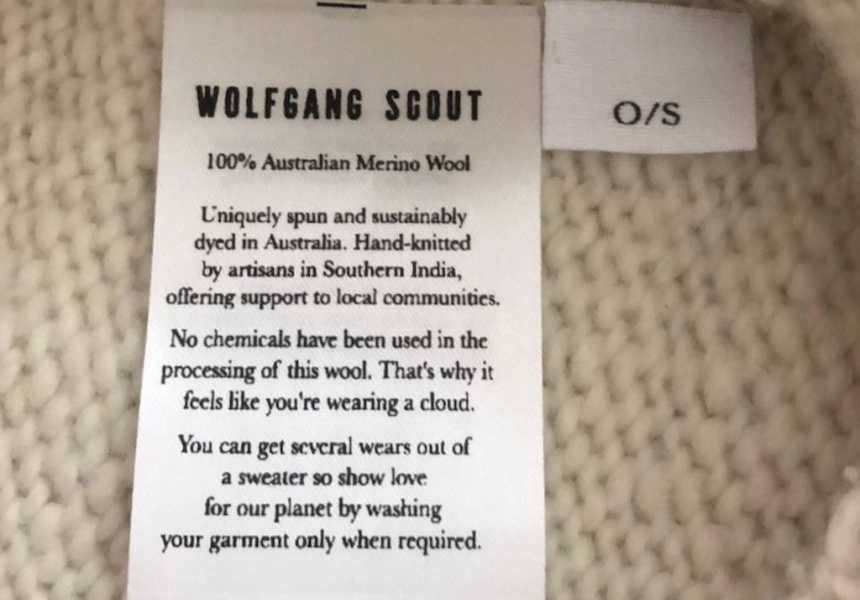 Most of us own a woollen jumper or two. But few understand the wool supply chain: it’s complex and at times unethical. The global wool industry doesn’t always protect the welfare of its animals or farmers, and it can be harmful to the environment.

According to some animal welfare groups wool-producing sheep are often forced to live in cold, harsh conditions so their hair grows as thick as possible in a short period of time. The wool industry is also rife with “mulesing” (which involves cutting the skin around the tail, which can be painful), ear punching and tail docking. Raising sheep can also be taxing on the environment. And wool production contributes to greenhouse gas emissions.

These issues were at the front of Natalie Wood, Carla Woidt and Marianne Horton’s minds when they decided to launch their merino wool label, Wolfgang Scout.

After two years of careful planning, Melbourne-based Wood (the former design director at Country Road), Woidt (previously head of product development at Helmut Lang and Theory) and textile designer Horton founded a fully traceable and sustainable knitwear label that aims to support the Australian wool industry while ensuring animals are treated with respect and care.

They work with a single Victorian sheep farm – Kia Ora Merino – accredited by the Responsible Wool Standard as animal, earth and people friendly. All aspects of the business are sustainably and ethically run.

“This brand grew out of a love of wool,” Wood says. “And wanting to work with a beautiful fibre that is so versatile. Wool is one of Australia’s greatest products, so we’re especially interested in supporting [the industry] in such a way that promotes sustainability.

“How could we start a new brand and not make it sustainable?” she continues. “We all practise sustainability in our home life – eating organic food, avoiding packaging, being mindful of our footprint on this earth. So it makes perfect sense to bring this into what we are making.”

Every Wolfgang Scout jumper is hand-knitted – it can take more than 40 hours to complete one – by artisans at a female-run, female-only factory in India, which provides education and above-average wages to its employees. The jumpers are made using Wolfgang Scout’s exclusive yarn, which the label developed with Kia Ora. No chemicals are used in the processing of its wool, which is hand-dyed with natural and organic dyes in Australia.

“It’s a lower micron [wool-fibre diameter] you would usually find in hand-knits … making it softer than anything you will find around,” Wood says. “It feels like you’re wearing a cloud.”

The label’s debut collection, which is stocked at Incu, features slouchy, oversized cropped sweaters in dandelion, black, rose and cream.

Wool is a weather-dependent textile, and Australia’s so-called “wool clip” (the total yield of wool shorn in Australia during one season) is forecast to sink to its lowest level in almost 100 years this year due to severe drought. As a result, farmers are reducing their flocks – often by slaughter – to reduce the amount they must spend on their animals. Wolfgang Scout’s partner farm, Kia Ora, has gone down a different route.

“The farm we work with has had to move on to additional grain feeding due to the drought,” she says. “As a nation, we should do as much as we can to support wool growers, particularly those that are RWS certified or wanting to invest to transition to the standard.”

Forging strong relationships with each and every business in their supply chain has been integral to the Wolfgang Scout founding trio.

“From the grower, through cleaning and spinning, dying with eco-friendly dyes, right through to knitting with a company that introduces women back into the workforce. All points of contact are important,” says Wood.

This article first appeared on Broadsheet on May 8, 2019. Some details may have changed.