Blush-pink suit jackets, floaty powder-blue dresses, linen safari jumpsuits and chocolate ribbed knits hang inside the Sydney designer’s studio, which is where she comes up with new ideas for flattering fits with minimal waste. 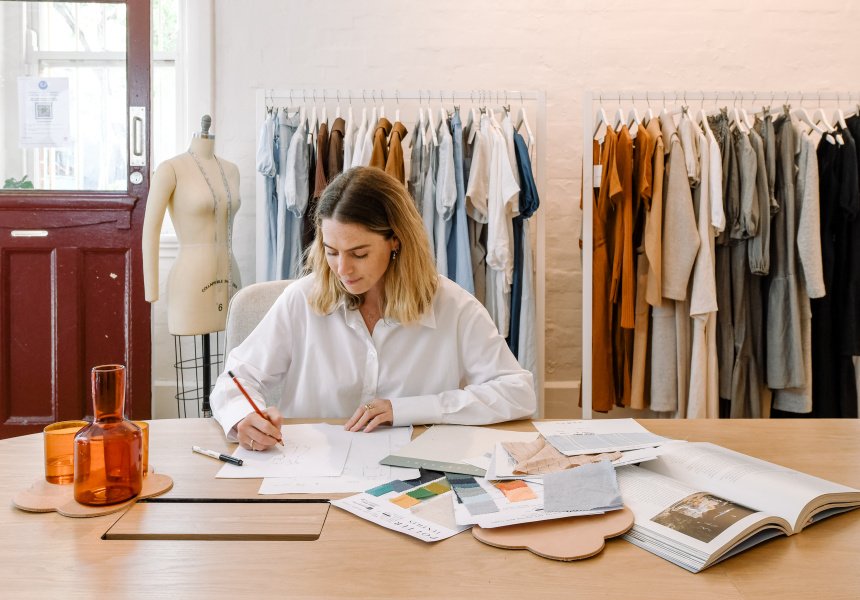 This year, designer Jillian Boustred marks the sixth anniversary of her eponymous label. With each new collection she spends time finding ways to balance her love of creative fashion with her core values as an ethical and locally made label.

Since launching in 2015, Boustred has worked with the same fabric cutters, sewers and buttonhole makers within driving distance of her workspace. When Broadsheet visits Jillian Boustred’s current studio, the 30-year-old fashion designer is sitting at the oval-shaped table in the middle of the new store, where she usually plans future collections, as well as other marketing and creative direction.

At a bench in the working studio space, near the back of the store, Gemma Geyer, head of production and sustainability, is sifting through scrunchies and tote bags made from fabric offcuts from the ankle-length linen dresses hanging nearby.

There are spools of thread in powder blue – a signature colour for the brand; swatches of patterned fabric scattered across the bench, from Italian mill Lanifico Cangioli, chosen for its sustainable practices; and sewing machines ready for crafting face masks or material bags to make use of each roll of fabric as much as possible.

Boustred studied Design in Fashion and Textiles at University of Technology Sydney (UTS), and she worked at Gorman through her uni years. She later joined Ellery, before starting Jillian Boustred from a sharehouse in Annandale, Sydney. She’s a natural clothing maker; at school she would order printed fabrics from Ebay and transform them into A-line skirts and simple dresses.

“I got friends to come over and they modelled for me,” she recalls. “I took photos in the backyard, printed them out and pinned them around school for a sale at my parent’s address. I would have been around 17 and my mum and dad had given me about $200 to buy the fabric.

“It felt very intuitive for me,” she tells Broadsheet. “I didn’t start out with the intention to create something that was sustainable. I wanted to do it because I loved designing clothes. Sustainability has become more important for me. It comes from a place of wanting to do the best I can do for the label.”

Jillian Boustred styles are timeless, often multi-seasonal and there is a custom-order option for bridesmaid dresses. “Classic, clean shapes are what works and I love that style too,” she says. Working with linen has been partly a style choice and partly a reaction to the market. An instant favourite for shoppers at the moment is the safari jumpsuit which comes in natural and black. It’s one you might have seen modelled by influencers on social media, too.

“Before, I was working with a lot of prints – and I quite like prints, but no one was buying [them] so I focused on good shapes and clothes that fit well,” she says. “I’ve enjoyed the Phillipa dress. It feels like a mixture of something that’s classic but also it’s a little bit glam. It’s an interesting time to think about [potentially] making our styles made to order, or [whether we] should change our collections to a core collection and one about play.

“When I design a new collection, I’m thinking about how flattering it’s going to be, how easy it is to wear, and what colours will compliment people. I’m guided by what the customer likes, and I think that’s how the label has evolved. We always try to focus on natural fabrics.”

Having customers wander into the space has been a new development – one that Boustred and Geyer are still adapting to – as the brand moved to a new location next-door from its former studio. Previously by appointment only, the studio now has regular opening hours. There’s a curtained changing area, which they say has helped with feedback on how the latest collection fits and feels – something that underpins what Jillian Boustred is all about.

“The way something fits is so important,” says Boustred. “I subconsciously design things that will suit my figure – I have bust, hips and curves – and a lot of customers have found the shapes flattering.”

Geyer, 26, found Jillian Boustred on the now-closed retail website Well Made Clothes. She joined the label as an intern, then moved to Nashville, US, to work as a seamstress for slow fashion label Elizabeth Suzann, later before moving back to Sydney to join as an employee.

Day to day, Geyer manages the customer inbox and works with the Sydney-based makers when it comes to problem-solving things such as broken zips, or delivering material to makers in Belmore and Greenacre. The knitwear range is the only part of the current collection that’s made overseas, in China, though Geyer tells us they’re looking for skilled jersey makers in Australia for next season.

“It’s been really good to have someone else’s input,” says Boustred. Geyer helps Jillian Boustred maintain and improve its transparency and accountability. “Fashion, or in any industry, can be really complex to understand for its environmental impact. What we’ve always said is that, for the customer, it’s always good to ask about how something is made,” she says. “We’re digging deeper into our responsibility and our footprint.”

Designing to suit customers, seeking more local solutions and reducing waste keeps Boustred and Geyer busy. “I feel like the system is broken,” says Boustred. “If you think about it economically, making a new collection every few months – pumping out thousands and having leftover stock – is a money burner. It makes sense economically to move forward with a way that’s not about newness or tight timelines.”

Geyer adds: “We’re using natural fibres, but if it ends up in landfill it’s not going to break down no matter what material we use. We asked our cutter to save our scraps so we could see what they looked like, and when we got them back from a relatively small production run it was heaps, so it’s an ongoing project.”

The pair has engaged a new linen supplier in Belgium who has a transparent and responsible track record, and they’ve started using organic poplin, too. They’re also experimenting with using ties instead of zips or elastic to be even more environmentally friendly, as well as having adjustable styles. “I think what people want from us is adaptable fashion, so something they can wear on a Tuesday with a T-shirt or to a wedding,” says Geyer.

“It would be nice if this space became our own little factory,” says Boustred of the bigger picture plan for the Chippendale space. “We’ve spoken about employing refugees and first migrant women. We could then extend our made-to-order offering, too.”

See more in this series.