Slippers You Can Wear to the Pub

Melbourne-born couple Lib Hutton and Will Carter saw a gap in the market for unisex hotel-style loafers. So they made Bertie. 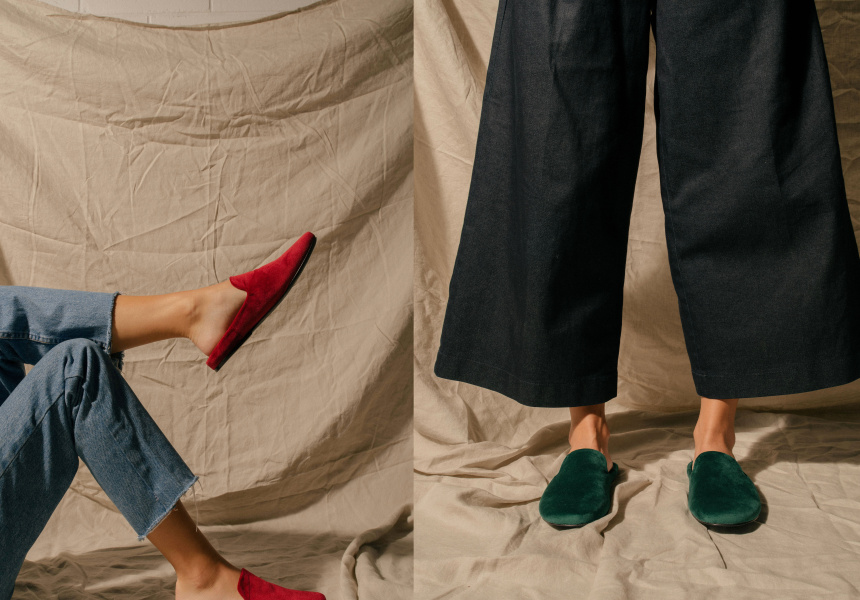 On chilly winter mornings our feet face a series of little punishments: the excruciating feel of the cold floor after you first roll out of bed; the brutal slap of frosty air when you get out of the shower; and finally, stepping into a rigid pair of work shoes.

“Pyjamas” moved out of the house and onto the runways, and then the streets, a number of years ago. Now slippers have followed.

The idea for a label devoted to the slip-on came to Lib Hutton one day while she was cleaning the house and noticed her fiancé, Will Carter, had accumulated a collection of cheap hotel slippers.

“He wears them until they’re old and hole-y,” she says. “I saw about six pairs and I was like, ‘Oh my God, we need to get you a pair that will last’.

“There wasn’t a lot out there that wasn’t a Gucci slipper – something really stylish but [also something you could] really bash around in. There wasn’t anything on the market that was … affordable and minimal.”

The couple decided to create a pair of unisex slippers you could wear to the pub or to work as well as around the house. They turned to the classic Prince Albert loafer design for inspiration – a shoe originally worn in the 19th century by people who were entertaining in their home – and the name Bertie was born.

Hutton and Carter, who grew up in Melbourne before moving to Sydney in 2016, worked with sourcing agent BV International to find an ethical factory in China to produce the slippers.

“The factory is in Huzhou, two hours from Shanghai,” says Hutton. “They have a 25-year history and have passed the ISO 9000 and ISO 14000 audit, meaning it’s a high quality and ethical factory. The ISO 14000 also means the factory is environmentally friendly.”

The design is a little bit hotel slipper, a little bit loafer; it has a lowered version of the latter’s heel to give it a more comfortable slip-on fit. Currently available in three colourways – hunter green, mulberry red and peacoat navy – the footwear is made with velvet and a 100 per cent leather sole.

“They look a lot better dressed up than dressed down,” says Carter. “You can wear them around the house with your track pants but they also look really good with a chino or a skirt.”

There's also a personal monogramming service, so you can add a personal touch to your pair.