P.E Nation on US Domination, Wearing Heels with Leggings and Why It’s “Bullshit” Athleisure Is Over

“As much as we knew we were onto something, we didn’t know it would be this big.” 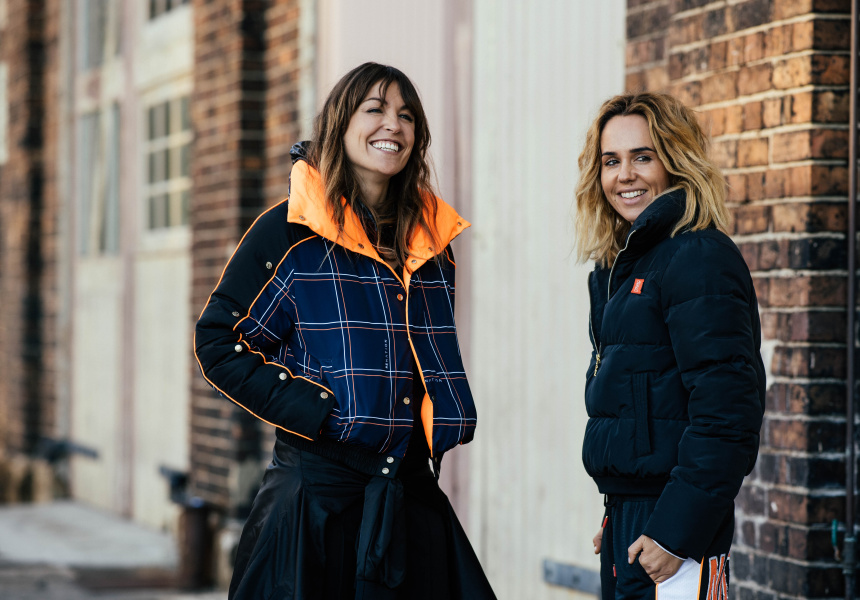 Photography: Courtesy of P.E Nation
1/11
by Emma Do
Share

Pip Edwards and Claire Tregoning aren’t kidding when they say they’re busy. Our planned interview has shifted three times in the lead up to their label P.E Nation’s debut menswear show at Mercedez-Benz Fashion Week Australia (MBFWA). When we finally pin Edwards down for our phone call (Tregoning is holding down the fashion-week fort for now) she’s energetic and eager to talk business.

There’s a lot happening in P.E Nation’s world right now: menswear, plans for sports-specific designs (yoga, tennis, boxing and Pilates are all on the drawing board), plus the all-important push for the American market, which will see the Edwards and Tregoning spend much more time Stateside this year.

“I’ve worked in fashion for 17 years and I’ve never seen this much excitement in a category before,” says Edwards of athleisure’s rapid expansion. “I think Australia and America are leading this category and there’s a lot more to do and more to explore.” Analysts have warned that the athleisure trend is beginning to plateau as the market reaches saturation point, while streetwear gains traction. But Edwards isn’t buying it. “That’s bullshit. I think health, wellness and fitness is on the forefront of everyone’s minds,” she says. Nevertheless, P.E Nation is taking heed of trend predictions and expanding its offering beyond women’s athleisure. Last year the label introduced denim (with a sporty, ’90s slant), and earlier this year, it revealed its first menswear collection, and showed it at a recent runway show at MBFWA.

P.E Nation seemed tipped for success from the very beginning. In 2015, before the label officially launched its first collection, Edwards had already secured stockist deals with major retailers at a womenswear trade show in New York. With financial backing from Wassim and Ziad Gazal’s company Hotsprings, the upstart label had proven itself in its first two years of business: it had exponential growth and had locked in 200 international stockists (Net-a-porter, Selfridges and Lane Crawford among them), a feat most young labels can only dream of. Today the label’s total business growth stands at 450 per cent from its launch in March 2016.

Back when P.E Nation entered the market, athleisure was the word on everyone’s lips. But in a sea of floral-print yoga pants and sombre workout wear, Edwards and Tregoning’s “active streetwear”, with its vintage sportswear references and colour blocking, instantly cut through the noise.

Edwards and Tregoning met nearly a decade ago while working at Sass & Bide (Edwards was senior creative and accessories designer and Tregoning was senior designer). Edwards had no formal design training; she was in the corporate world, which she ditched early to do PR for the rule-breaking Ksubi (then Tsubi). Her freelance styling work cemented her as a maker of trends, a status aided by the media attention around her personal style as she partied hard around Sydney (though those days are firmly behind her now). Eventually she landed a role at Sass & Bide before spending four years as design director for General Pants.

When it comes to P.E Nation, Edwards insists it wasn’t as strategic as it all seemed. “As much as we knew we were onto something, we didn’t know it would be this big,” she says. “We knew [P.E Nation] was needed because Claire and I needed it. We’re working mums, so it’s about the school drop off, pick up, going to work, but then playing and exercising too. P.E Nation was about getting through the day in one outfit and not looking like you were coming out of a gym or not making an effort.”

Edwards and Tregoning’s personal style is part and parcel of the label’s success. The pair is often photographed at events wearing P.E Nation paired with luxury designer pieces and sky-high heels, and Edwards’s Instagram account (121,000 followers and counting) proves her individual taste is something people want to buy into. Whether she’s working out at a Pilates studio, posing with other mums at her son’s school, or at a cocktail party, Edwards is nearly always wearing P.E Nation. “If we’re not living and breathing it, then what’s the point?” she says. “I think we personify the brand and make it real. You can see [the clothes] work functionally and we show you how to interchange it [with your wardrobe].”

A P.E Nation piece is instantly recognisable. Colour combinations, materials and shapes may change from season to season, but the label’s stamp of sporty stripes, primary colours and visible branding doesn’t budge. Edwards says a consistent aesthetic is key to any label’s success, and it’s true, particularly in an age of social media when branding is everything. In the design room, Edwards and Tregoning ensure the P.E Nation logo is visible on each item from various angles both in person and in photos.

Now that the fashion-week rush is over, the pair will get straight onto their next mission: US expansion. The US now supersedes Australia when it comes to placing orders. In 2017 the label had a 600 per cent increase in US sales across its online store and a 240 per cent increase in wholesale compared to 2016. It’s this healthy growth (plus endorsement from various members of the Kardashian clan, and from actor Margot Robbie) that give the designers the confidence to chase Stateside success. Not to mention that athleisure made by super-fit Bondi locals seems the perfect pitch to a nation obsessed with Australia’s beachside lifestyle.

What does the design duo think it’ll take to succeed in the US? “You’ve got new brands evolving every week there, so we’ve really got to stick to our guns and aesthetic and always offer something new,” says Edwards. “I think there’s more similarities than differences between the Australian and American market. We’ve already got some incredible retailers there, so now it’s about more exposure and spending a lot more time over there to really understand the demographics.”

As we’re wrapping up our conversation Edwards mentions a “massive collaboration” with a global brand that’s still under wraps. “We’re definitely keen to take on the super brands, so watch out,” Edwards says with a laugh.