Make, Then Wear, Your Own Customised Jumper in 12 Hours (Yes, 12 Hours)

Buy a “knit kit” from new Melbourne start-up Cardigang and you can have an easy-on-the-eye jumper or scarf in 100 per cent Australian merino wool in less time than it takes to watch a season of The Crown. Start now for winter. 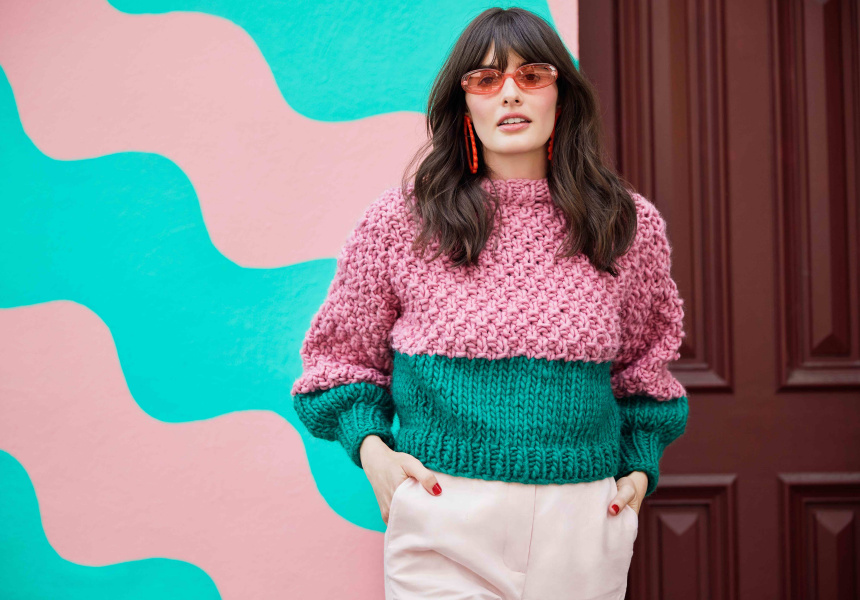 It was in the middle of Melbourne’s three-month-plus lockdown and the two mates, separated by more than five kilometres, took to knitting needles – rather than sourdough – over Zoom as a means to soothe the mind. Being fresh on the knitting scene (aka watching Youtube videos of how to knit) proved tough; knitting patterns tend to be rife with jargon and acronyms, and – especially if following a European pattern – err on the side of petite.

The tale is almost as old as time: something was broken so Collins and Bloxsom decided to fix it, creating Cardigang.

“We joked when we launched, right after lockdown ended on a 30-degree day, that the timing couldn’t have been worse,” says Bloxsom.

The unhelpful heat aside, they forged ahead with Cardigang. Currently, the online business sells “knit kits” for a scarf and four chunky-yarn, very easy-on-the-eye jumpers. Each kit contains enough 100 per cent Australian merino wool for you to knit your garment, with 18 colours to choose from; a pattern in easy-to-understand language; a bunch of helpful links to video resources; and needles.

While the patterns vary slightly in complexity, each one should take a beginner – that is someone with literally no knitting skills whatsoever – about 12 to 14 hours to complete. Yep, a totally wearable, handmade piece of gorge haute couture (essentially), ready to wear in 12 hours.

“Creating knitting patterns that were easy to follow and understand, not using any jargon or acronyms, was really important to us,” says Collins.

“With Cardigang patterns you can mark things off so you know where you’re at and don’t miss steps. We’re impatient, so we needed it to look good and be ready to wear by tomorrow,” says Bloxsom.

Knit kits start at $120 for scarves and $220 for jumpers. While this might feel steep, remember the yarn is sourced from Australian sheep and the product is handmade, albeit by you. The equivalent bought retail could cost hundreds more. Plus, it has the added bonus of giving you hours of mindfulness – or mindlessness, if you’re doing it while watching TV. (Handily, you can probably produce a knit in less time it takes you to watch a season of The Crown.)

More patterns, yarn colours and inclusive sizing are en route for Cardigang. Different fibres such as mohair, softer and washable yarns, plus ready-to-wear pieces are also in the works.