When the perforated neoprene bags landed, everyone wanted one. Imitators followed and trends changed, but its designer reckons quality materials, local production and stylish practicality keeps it in demand. 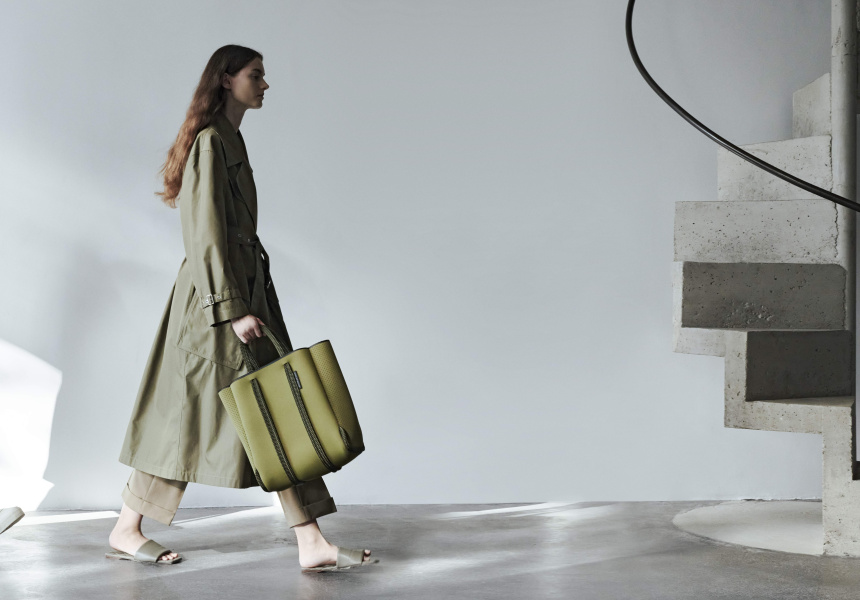 When State of Escape launched in 2013 with its Escape Tote, it didn’t take long before it was a must-have fashion item. There were a couple reasons for its success: it was made to order with quality materials right here in Australia – in a Sydney workshop in the north-west suburb of Castle Hill – which was, and still is, unusual in the local fashion industry.

The bag was also made from previously only utilitarian fabrics not really used for handbags: perforated neoprene and sailing rope (for the bag’s strap). The design was simple yet smart and sophisticated, dressy but casual. It felt excitingly new.

“There was not really a bag on the market at the time that was in between a beautiful luxury tote bag and a canvas tote,” State of Escape’s creative director and co-founder Brigitte MacGowan tells Broadsheet. “There was a spot in the middle that we slotted into … people would say to me, ‘wow, I’ve never seen something like that before, I want to be a part of that’.”

It wasn’t just the fabric that enticed people, it was the practical size. That first bag was a big fellow – perfect for hauling a lot of life stuff but giving an air of style at the same time.

The collection grew organically and not because MacGowan and fellow State of Escape co-owner, CEO Dee Maidment, were following the usual fashion industry release schedule. “What’s happened over time with State of Escape is, as my life has evolved and my business partner’s has too, where we started travelling, we said ‘right, now we need a cross-body bag in the collection so I can carry something cross-body’. And then we thought we needed a bag to slip a coat in alongside magazines, so we needed to create something a bit bigger.

“So the collection grew more out of a design to fulfill a purpose, as opposed to someone saying, ‘it’s spring, where’s the new product?.”

That practical approach has worked well for the fashion label, which is now available in the US, UK, Norway, Japan, Hong Kong, Singapore and New Zealand, and in a number of high-end stores including Selfridges Body Studio, LaMarca Well and Moniker Sport. Locally, it still works with the same retailers it did from day one, such as Bassike and Incu.

“I really believe that if you fill a purpose in people’s lives, you stay relevant,” MacGowan says.

It’s also about having a distinct ethos and sticking to it. Even though the world has changed significantly since 2013 – especially in the fashion industry, which has been gradually moving offshore – MacGowan says State of Escape has remained true to its design philosophy.

“We had a clear vision early on that we’ve been able to maintain … because we’ve kept everything local. We’re big on only working with a small group of retail partners and that hasn’t changed. We still have our factory here in Sydney and we’re always going to,” she says.

“It’s always been about producing a product that’s seasonless, timeless and beautifully made so it could be that staple bag in people’s lives. It’s not about creating new collections each season or following trends. When I was designing it, I was conscious of keeping it very minimum, clean and classic.”

That’s not to say there hasn’t been pressures to release more products. So instead of doing that, MacGowan says the label works on exclusive capsules for specific retailers and releases new colour options.

The latest release is the Sojourn, which transitions from crossbody to handheld or one you can wear on your forearm by adjusting the strap. It’s the same original design but by adding handwoven braid knots to the rope, MacGowan has cleverly created a three-in-one bag.

But the label’s journey hasn’t been without issues. Within 12 months of launching, a number of copycat neoprene bag brands popped up and felt ubiquitous. State of Escape pursued a number of court cases and copyright disputes, some of which continue to this day.

“There were so many. I felt so deeply passionate about what I had created, and as a designer, when you create something and it’s picked up…” MacGowan says, trailing off. “It was the lack of quality control by these brands. I didn’t want our product – which was locally made with the best possible materials and made with love and care – to be confused with those.”