Once reserved for bathrooms and tennis courts, terry towelling is suddenly appearing on the streets. Terry towelling probably makes you think of your bath towel, dressing gown or even tennis great John McEnroe’s bright-red headband. But the cotton-pile fabric has pivoted away from the bathroom and onto the street as designers reimagine the material via T-shirts, high-rise shorts, kaftans, two-piece sets, bucket hats, canvas bags and fringed robes, all primed for our beach culture.

This is part of a larger global trend. Resort wear has been gaining popularity for several years now, perhaps spurred by increased travel. And while plenty of international designers are releasing collections in this space, it’s Australians leading the charge, championing our relaxed coastal lifestyle and down-to-earth attitude. Top international stockists such as Net-a-Porter and Barneys are taking note.

In the hands of Melbourne-born jewellery and fashion designer Lucy Folk, terry cloth doesn’t shout “bathroom basic”; it whispers “easy elegance”. The designer’s resort-apparel collection of towelling robes and separates, hand-loomed in Marrakech, is perfect for summer lounging. After selling out twice – proof the style works when tailored – the line is poised to return in May alongside towelling duffle bags and hats made in collaboration with German milliner Muhlbauer.

Also in Melbourne, towelling was the main muse for fashion photographer Brigette Clarke and friend Lucy Halfpenny’s debut label, Terry. Inspired by long European summers and American ’70s poolside attire, terry cloth has been made into athletic shorts and tennis-style wrap skirts (in bright corals and muted lemons) that look just as at home on a rocky beach club along the Côte d’Azur as they do at St Kilda.

And in Sydney, Double Rainbouu’s latest resort collection features soft, drapey tie-dye terry robes in pink and aqua. Throw them over bathers or board shorts beach-side, or cinch and pair with slides in the city.

P Johnson is the latest menswear designer to release terry sets, which are made from a plush towelling fabric woven in Italy. The light and soft shirts and matching drawstring shorts come in forest green, burgundy and navy, and all feature the label's classic one-piece collar and smoked mother-of-pearl buttons.

Before you turn your nose up at leaving the house in a towel, consider this: the fabric is unbelievably comfortable, and you’ll never have to drip dry while wearing it.

This story originally appeared in Melbourne print issue 26 and Sydney print issue 18. Some details may have changed since publication. 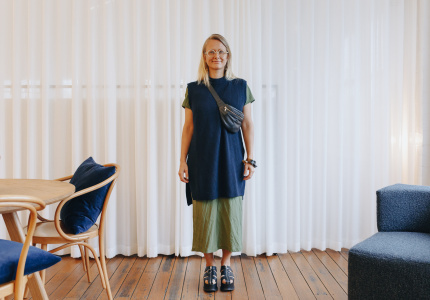