Four years of research and 10,000 kilometres of running have gone into the brand’s first running shoe. 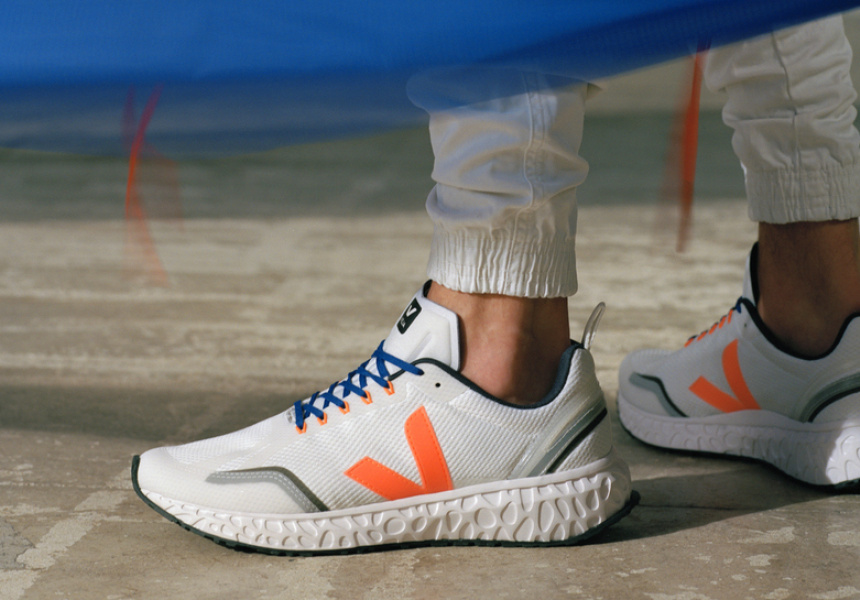 We’re swearing off single-use coffee cups and plastic straws, and giving more thought to the eco-friendliness of the meat we eat, the cars we drive and the fast fashion we wear. But many of us don’t consider the environmental impact of the sneakers we wear or how they’re manufactured.

Ethical French footwear label Veja is changing that. It’s already known for using materials such as wild Amazonian rubber (which helps in the fight against deforestation), fair-trade cotton and vegan leather in its cult sneakers. All Veja workers are paid fairly, and its cotton farmers are encouraged to grow their own food crops on their farms. Earlier this year it released a collection of vegan sneakers, The SDU Hexa, an adaption of the label’s popular leather SDU style.

Ninety-nine per cent of materials used in running shoes is plastic – specifically a polymer that is 99 per cent petroleum. We chuck out hundreds of thousands of such sneakers every year, which end up out of sight, and out of mind. But not out of existence.

“Our society’s dependence on plastic and oil is an ecological disaster,” Sébastien Kopp, who co-founded Veja with François-Ghislain Morillion in 2004, tells Broadsheet. The Condor project started four years ago, and the idea was simple: “to eradicate as much plastic as we could”.

“Our goal was, and still is, to go beyond petroleum, meaning we’ve replaced it with bio-based and recycled materials,” he continues.

Kopp and Morillion assembled a team that included specialist engineers with running-related experience. They set out to discover the “perfect” natural materials to replace the petroleum-heavy ones.

Now, after years of developing and testing prototypes, The Condor has finally landed. Made from recycled plastic bottles, rice waste, and other natural materials such as banana oil, sugar cane and a special wild rubber from the Amazon rainforest, these are runners you can feel good about buying and wearing. They’re 53 per cent bio-sourced (made from once-living organisms) and recycled, and the aim is to eventually get that ratio to 100 per cent. Like all its sneakers, The Condor style is made in a Brazilian factory where workers enjoy good conditions, benefits and fair compensation.

So they look good, and are made from good stuff, but are they good for running?

According to Kopp, yes. The Condor “is suitable for 80 per cent of runners, and is adapted to run a half-marathon”, he says.

Runners of different abilities around the world clocked up more than 10,000 kilometres in them before they received the final, definitive green light. The shoe’s shape was inspired by the bone structure of South American condor birds, which hints at what the company hopes you’ll do in them: fly (or at least run very quickly).

The first release includes six colourways – black, white, grey, yellow, pink-red and graphite – and is available online and in 70 stores around the world, including Sydney’s Pace Athletic and Melbourne’s Sneakerboy.

So, what’s next for Veja?

“We never talk about projects before they are actually done,” says Kopp. “[But] this is just the beginning.”

Veja’s The Condor is available now.