Meet Erik Yvon, Before He Gets Famous

The Melbourne fashion designer is blurring the boundaries between gender, luxury and streetwear. 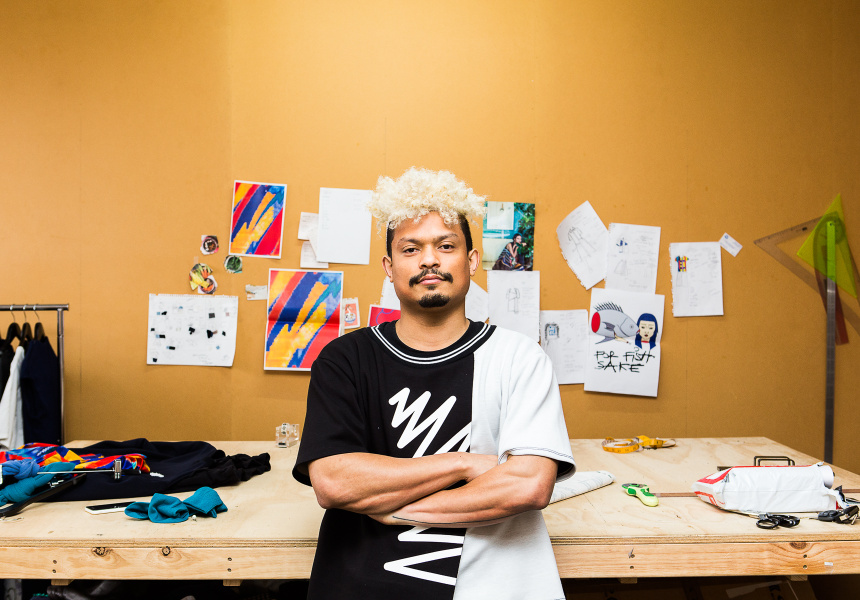 When Erik Yvon moved from Mauritius to Melbourne at 19 he worked in some of the city’s best restaurants before finding his true calling in fashion design.

“Cooking wasn’t my first career choice, but it was a means to an end,” says Yvon.

“I knew I wanted to be creative but I had to choose between a visa (to Australia) or studying something I liked. I went for the visa so I did a cooking course before working as a chef for a couple of years.”

Movida, Syracuse and Mecca Bar were among the “fancy gigs” Yvon notched up on his CV before finally enrolling at RMIT to study fashion in 2012.

“I didn’t have any sewing skills but I did a lot of fashion illustrations during high school, so I thought, ‘Wouldn’t it be amazing if I could turn them into actual garments’,” he says.

It has only been a year since he graduated and founded his eponymous label, and the young designer has established a name for himself as one to watch for his bold and androgynous take on women’s and menswear.

Yvon says he learned a lot from RMIT and his subsequent internships at Romance Was Born and Neo Dia.

“Before I started I would look at a shirt and not know how much work went into it. There is so much competence and hard work that goes into making a single garment, from the buttons and the thread to the fabric, the pattern and the finishing.”

Yvon’s obsession with process extends to ethical production. His label is made entirely in Melbourne and the designer works closely with local suppliers to ensure a squeaky-clean supply chain.

“As an independent designer I firmly believe in strengthening our local industry by keeping our production onshore, transparent and ethical.”

“I’m all about mixing luxury with streetwear and gender fluidity and trying to blur the lines between boys and girls,” says Yvon. “Fashion in Melbourne is very women-focused and for me it’s about saying, ‘We boys are here too and we can wear clothes as well’.”

Pieces run on a limited-edition basis and are only stocked online, which adds to the gender-neutral label’s allure and exclusivity.

“My customers are people who care about what’s happening locally and want to support emerging designers,” he says. “They also tend to be culturally diverse because I use models from all backgrounds – South African, Asian, Caucasian – to represent the diversity of Australian cultures.”

On August 26 Yvon will debut his new collection Gang Gang with a pop-up shop in collaboration with Twofold Jewellery during Melbourne Spring Fashion Week. The space at RMIT Building 80 will provide an insight into the processes behind both labels and allow the public to meet the makers.

“We want to encourage our community to be curious and engage with us for a better insight into the fashion world,” says Yvon.

The pop-up shop follows the designer’s global debut in the New Generation show on August 23 during New Zealand Fashion Week.

“It’s our first-ever international show, so it’s pretty exciting,” he says. “I hope we can generate some brand awareness and hopefully make some good connections.”

But while Yvon’s international expansion comes a year after graduating from RMIT, it seems the designer can’t keep away: in addition to the RMIT pop-up store his studio is across the road from the RMIT Brunswick campus.

“I’m in a warehouse with a textile designer and two bands,” he says. “It’s pretty chilled during the day but they practice at night so if I’m falling asleep it really picks me up.”