When Anna Cordell opened her first physical store in the Melbourne suburb of Northcote last December, she told us it felt like an act of defiance against lockdowns and the impact technology has had on human interaction these past couple years.

“Opening a bricks-and-mortar store in Melbourne right now feels like a rebellion,” she says. “My business was so tied to the internet during lockdowns, I desperately wanted to bring my designs to a space in the real world. I want my customers to have a human experience, and after we’ve all been artificially separated for so long, it’s giving me endless energy to make this a really special space.”

In some ways the heritage-building tenancy felt like it was meant to be. “[The space] called to me because it’s right next door to the first place I played a full-band show,” she says. “As soon as I saw it was for lease, I just jumped in.”

Cordell’s vintage-inspired ready-to-wear and one-off pieces are all informed by her love of music, especially from the ’70s, and her background as a vintage buyer and retailer (which included building collections for vendors such as General Pants and Sportsgirl).

There’s a wide-legged silk suit with a pleated top for extra drape; a stretch-velvet jacket and pants in deep burgundy, green and navy with a soft belt; very cute high-waisted shorts with matching vest and wide-lapelled jacket in pastel corduroy; and a simple T-shirt available in linen or velvet.

These are outfits made for making entrances; they’re confident and beautifully made. Which is exactly why they’ve found favour with modern-day musos including Courtney Barnett, Ella Hooper, Sharon Van Etten, Tim Rogers and Missy Higgins (who wore Cordell's pieces for her entire recent tour). “I love the way musicians dress because there is so often a confidence and freedom, and also a playfulness, that I would love to encourage more people to embrace,” she says.

Cordell doesn’t adhere to the seasons, and makes all her garments from locally sourced fabric, or vintage materials for one-off pieces. All production happens in her home town. “I’m determined to keep the creative spirit of Melbourne alive,” says Cordell.

Her own creative journey was more by accident than design. “I didn’t study fashion: I fell into making and selling things at [Melbourne’s] Camberwell markets after I had my first daughter at 22, so I learned completely on the job,” she says. “I began altering vintage clothing, and it slowly led to creating pieces from scratch.”

She didn’t launch her own label until 2017, after raising five children. It was demand for Cordell’s made-to-order suiting that gave her the confidence to open a boutique. “Custom suiting is still available by appointment, but as things are growing it’s allowing me to make small runs of ready-to-wear,” she says. “I love slow fashion but sometimes it’s a long wait for my customers, so it’s nice to think they can come to try things on and walk away with them on the day.”

Things have now come full circle for Cordell. She always thought she was going to be a musician but dropped out of music school when she fell pregnant with her first daughter at 21. “At the time I somehow believed that meant music was over for me,” she says.

But in 2020 she released her first full-length album Nobody Knows Us, and says fashion and music are now equal expressions of her creativity. “I’m working on some new material now with a little more of a psychedelic rock bent, and my music and clothing seem to be evolving in a similar direction. One informs the other, which is pretty fun.” 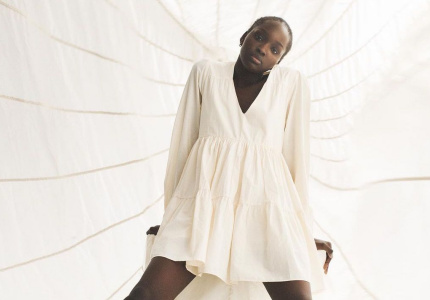