One of Australia’s most renowned living painters, Ben Quilty was set to debut a brand new exhibition at Tolarno Galleries before lockdown. But, with the virus interrupting those plans, the new show – titled The Beach – has moved online.

You won’t find sand or blue seas among the artworks, despite the exhibition name. Instead Quilty’s subject is fighters locked in close combat, based on screenshots of UFC bouts. It’s also inspired by the work of American realist painter George Bellows, who often depicted illegal 20th-century fight clubs and boxing.

Many of the paintings are named after Australian beaches; only one is called Cronulla, though many of the works evoke scenes from the 2005 Cronulla riots. It’s a continuation of Quilty’s long body of work examining Australian identity, history and masculinity.

Also in the exhibition and available to view online is Freefall, a bronze sculpture depicting an anonymous, nude man – based on Quilty’s friend, a retired policeman – with his head buried underground. The work is a response to PTSD, and a comment on the politics of memorialisation.

You can view The Beach here.

Quilty is also trying to raise funds for the UNHCR’s relief efforts in Afghanistan. An official war artist, he visited the country in 2011 with the Australian Defence Force.

Donations will be used to provide shelter and protection for Aghan residents in need during the winter, as well as food, water, sanitation kits, healthcare and psychological support. Donate here. 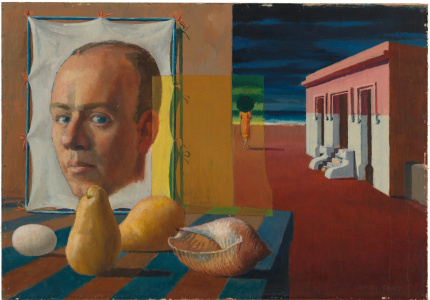 Jeffrey Smart at the National Gallery of Australia