From America to Europe and Australia, top chefs and brand-name restaurants are curating what you eat at events that used to be just about the music. What happened? 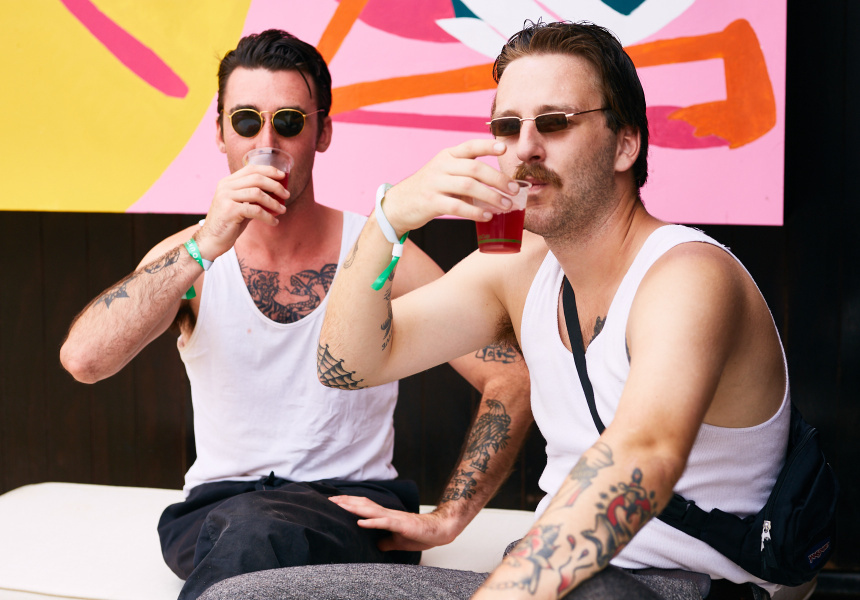 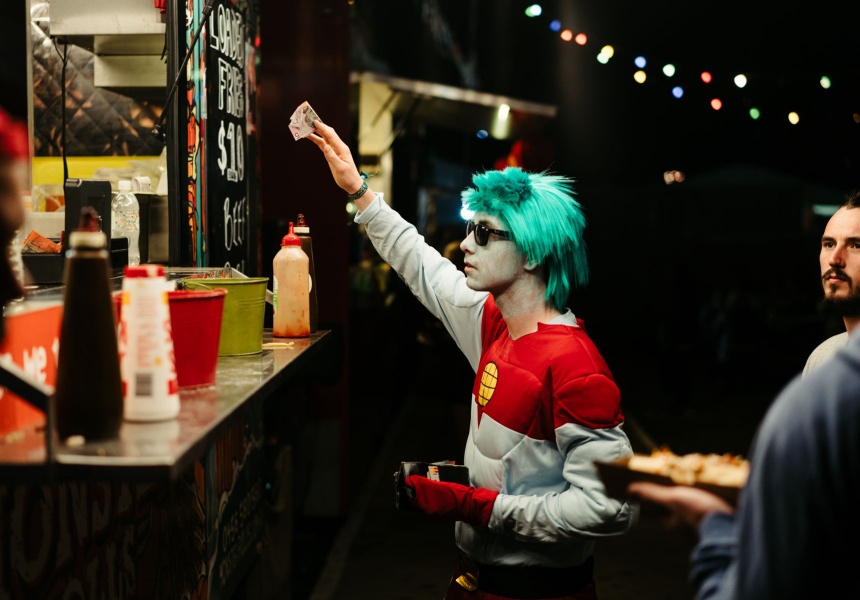 Splendour in the Grass 2016

The very first St. Jerome’s Laneway Festival was held in Melbourne’s Caledonian Lane; a quintessentially dingy inner-city alley, with overflowing bins lining the back walls of cheap, late night restaurants, and a thin film of mysterious, phosphorescent sludge always underfoot. It was the kind of spot cab drivers would look at, then back at you, seeming genuinely concerned about leaving you there.

The bar itself, St. Jerome’s, was Jerome Borazio’s first foray into an industry he’s now a leader in. It was a well-loved but run-down series of nooks crammed into a condemned outdoor loading area behind Myer.

The festival was an idea brewed by Borazio and music manager friend (and now long-time collaborator) Danny Rogers. One day in February 2005, the ever-present bins were moved behind a makeshift stage, allowing 1400 punters to see acts like the Avalanches, Claire Bowditch, Eskimo Joe, Cut Copy and Architecture in Helsinki.

The bar branched out, too. Beyond the usual longnecks of Melbourne Bitter, vodka Red Bull was on offer for the first time, and festival-goers could buy spring rolls direct from the chef at the rear of the Vietnamese place that backed onto the lane.

“It's fair to say we probably made most things up as we went along,” says Rogers. “The first year the food was simple and last minute, like everything else.”

Years later, Borazio has built an empire, with a collection of successful venues including St. Jerome’s The Hotel, 1000 £ Bend, The Church of the Bang Bang Boogaloo and Ponyfish Island under his belt, while Rogers manages some of the biggest names in the music industry.

As Laneway gained popularity, Rogers and Borazio wanted to ensure they were delivering a better on-ground experience every year. Laneway 2018 sees bands such as the War on Drugs, the Internet, Bonobo and Father John Misty take the stage; a natural progression from the grass-roots original that many pegged as a sure fire success from the beginning. What was less predictable, though, was the elevation of the food over the past 13 years.

“As the festival has developed so has our food and drink offering,” Rogers says. “I want a festival known as much for its food and drink as its incredible line-ups and unique locations. I think it all adds up to a day you will remember. If you eat and drink well, you feel fantastic and have energy to see more amazing artists.”

“We constantly change the way we do things and always look to do things at a level we haven't hit before,” says Rogers. “Mainly because all of us love great food and wanted to try and match that experience with the incredible line-up. Getting someone like David Moyle to program food is like asking Pink Floyd to unite and play Laneway. We want the food to be as good as it can be.”

Meredith Music Festival in Victoria is well known for providing a wide range of relatively nourishing fast food, with Raph Rashid’s Beatbox Kitchen and Taco Truck leading the charge. Attendees can buy fresh coconuts and baby watermelons too, and there are cocktails available at comfortable bars with good views of the festival. It all comes together to cultivate a relaxed festival atmosphere.

The shift in food quality hit the US before making it to Australian shores, where festivals like Coachella now feature a plethora of dishes that at times seem largely designed for Instagram – like rosé popsicles and $35 gold-leaf-covered doughnuts. It’s now common to see both in the US and in Australia, menus making headlines, released like a second line-up (see links above).

“Coachella do it really well, Outside Lands in San Fran is mind-blowing and locally, the Dark Mofo Winter Feast is close to heaven on earth,” says Rogers. “Expectations are high and everyone wants to deliver the best possible experience imaginable.”

Sydney City Limits, running for the first time this year, has just announced Jake Smyth and Kenny Graham (Mary’s, The Lansdowne, The Unicorn) as the food curators for the event.

Alongside a line-up featuring Justice, Beck, Vance Joy and Phoenix, will be dishes from a selection of both high-end and neighbourhood dining institutions including Mary’s, Fratelli Paradiso, Porteno, Hartsyard, Bad Hombres, Rising Sun Workshop, Paper Bird and Saga, with coffee from Artificer.

It’s a trend festival organiser Jeremy Gordon (Big Day Out, Splendour In The Grass, Boogie Festival) saw coming. In the past, Gordon had tried to encourage suppliers to offer higher-end food at festivals, but the idea wasn’t received as well then as it is now.

“Back when I went worked for Big Day Out in the very early years, we tried our best to have a good range of food available, but it was just a lot more difficult to convince vendors to do it,” Gordon says.

It was a gradual change that has taken hold as audience expectations increased. With standard ticket prices creeping toward $200 for a one-day festival (by comparison, the first Laneway Festival cost $36), no longer are punters satisfied with the same dining options as they might find on a Saturday morning at their local hardware store.

At the same time, restaurants are becoming more accessible and more flexible. Many are now open to taking their brand outside of their own venue and collaborating with festival organisers, where in the past they were more cautious.

“Top restaurants are more willing to give it a try these days,” Gordon says. “And audiences have the chance to try the food offered by restaurants they may not necessarily go to normally.”

Though Rogers and Gordon both admit it hasn’t been easy to change the way the food and drink set-ups at their festivals are run, there’s no doubt the landscape is changing, and providing a better overall experience to audiences as a result.

“It just pushes everyone to go that extra yard to make something really amazing come to life,” Rogers says. “Doing this with 15,000 people running around in a festival space can be challenging, however we have bespoke teams helping us do this and I raise my skinny glass like an antenna to heaven for having such a creative and wonderfully committed team who help make this come to life.”