What’s Making Sydney CBD (and Its Surrounds) So Good Again? Many Things – You Just Need to Know Where To Look 101 George St, which is undergoing a renovation 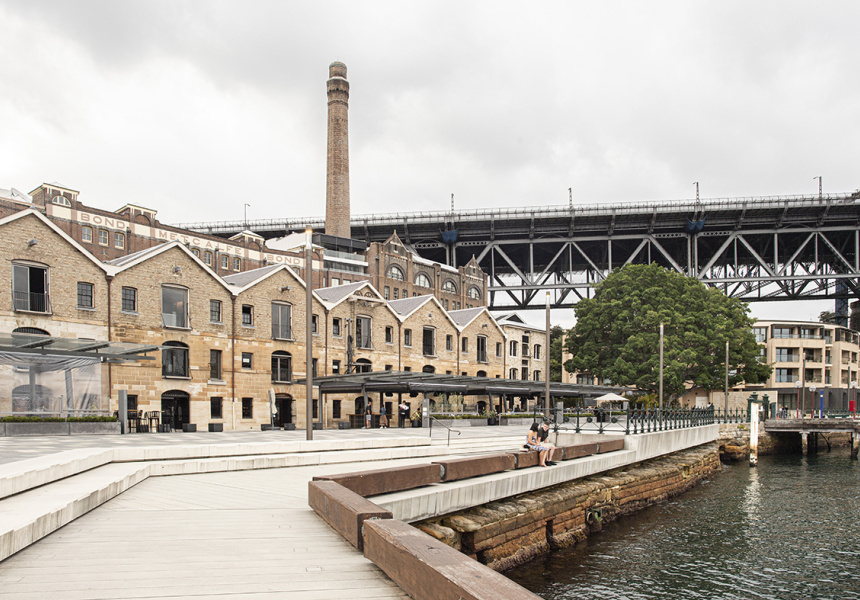 It might have been the elation (or disorientation) of seeing an actual movie in a cinema (the latest James Bond; I enjoyed it), but as I exited the George Street multiplex and made my way uptown along the CBD’s main thoroughfare, I had a thought: “Wow, the city has really changed.”

And I’m not talking about the quieter streets or the less busy shops that Covid has ushered in. I was struck by the beauty of George Street. Yes, George Street – the once boisterous, traffic-clog, heavily exhaust-fumed road that we used to dim out with headphones. But it seems no more.

While most of us have been working from home or have not made it into the CBD the past (almost) two years, those big infrastructure projects years in the making have materialised.

The big obvious one is George Street, which has been transformed into a serene pedestrian oasis. Buskers give the street a soundtrack, flowerbeds add colour and people parade like they’re in an Italian seaside village. Its serenity is only punctuated by gliding trams and their occasional cute “ding”.

Then there’s the stylish new shops centred around King Street (like Sneakerboy) – and what’s happened to Wynyard Station? Descend the George Street escalators to the slick subterranean train station and your descent is illuminate by artful, golden lights

Not far away, a neon glow, hip-hop and enthusiastic chatter radiates from Dan Hong’s new southeast Asian diner, Mumu. Next door, people drink Negronis on outdoor tables at another Merivale eatery, the recently refurbished Bar Totti’s. It’s now got way more space, is serving its signature pastas and is open until 2am.

Continue further north along George to The Rocks, and one lane of traffic has been turned over to pedestrians. Visit on a balmy evening and you’ll find tables of folks eating and drinking under umbrellas. There’s a real vibe here, and the once mainly-tourist hub feels like it’s having a moment. That revitalisation is being led by some top Sydney operators, including the team behind other excellent CBD spots, The Duke of Clarence and Barber Shop. They’ve transformed a 100-year-old warehouse into Hickson House Distillery, a grand venue serving an impressive 600 spirits.

There’s more drinks at new Frank Mac’s, the original Rocks pioneer Maybe Sammy, and in April the fun pop-up by The Baxter Inn and Restaurant Hubert team, 101 George St, reopens as a European wine bar. It’ll be called Le Foote, named after the heritage-listed building’s former resident, the bar and restaurant Phillip’s Foote, which was there since the 1970s.

But this new city energy isn’t contained to The Rocks and George Boulevard (should we consider a name change?). Theatre Royal just reopened after a makeover, and the season of the critically acclaimed musical featuring Bob Dylan songs, Girl From North Country, has just been extended. The Royal’s refurb was part of the MLC Centre precinct makeover. It’ll eventually have about 30 dining venues and some retailers, with restaurants overlooking Martin Place. Ones to watch out for include Aalia (by the Nour and Henrietta team), and a Japanese eatery from the team behind Nikkei-style Canberra restaurant Inka.

Other big CBD developments you might have missed include the ambitious multivenue Shell House. Think rooftop bar, restaurant and a sexy cocktail lounge under the building’s clocktower.

It’s the old-things-are-new-again story at Hinchcliff House. The former woolstore is now an Italian-inspired eatery Grana and a very excellent (and underrated bar) Apolloni. It anchors another developing dining and shopping hub, the pretty Quay Quarter – watch as its discreet lane space blossoms.

There’s lots of other vibrancy happening from old favourites like SILY, which hosts monthly events called Cocktails and Crime Stories, where a historian unearths notorious 19th and 20th-century Sydney yarns (like Gin City - Sin City, in February). The State Library has even opened a rooftop bar, blockbuster exhibition's (we’re looking at you the Art Gallery of NSW’s Mattisse, and have you walked around Darling Square on a weekend? There’s lots going on.

Sure, Sydney’s CBD and its surrounds might not be as thriving and predictably busy as it once was. But that’s not because things aren’t happening – in fact, it’s the opposite. You just need to know where to look. And sometimes that spot is really obvious.

This article is produced by Broadsheet in partnership with Destination NSW. More Info here