It was the year of staying in – here’s what got us through lockdowns in 2020. Was 2020 the year of watching television shows you’ve had on your must-binge list forever? It sure felt like it – with mandatory lockdowns and our social lives greatly diminished, we turned to streaming services to get our kicks. Some weeks that involved whatever everyone else was watching so we could feel in-the-know (ahem, Tiger King), but many of us finally got to those critically-acclaimed masterpieces we simply hadn’t found the time for. Whatever the case, it’s likely you came out of this year feeling at one with your couch (and loungewear).

These are the shows we tore into this year and that have lived rent-free in our brains long after we finished watching them.

Watching Connell (Paul Mescal) and Marianne (Daisy Edgar-Jones) come together and then fall apart was, at times, bloody hard to watch. But the impeccable performances by Edgar-Jones and Mescal, teamed with stunning cinematography (the pool party scenes! Tuscany!) are what made this series such a joy to watch, and the fact it embodied all our tumultuous first relationships made it one we’ve mentally revisited all year.

Normal People is streaming on Stan

It may have launched in 2019, but many of us discovered this heartfelt comedy series this year, thanks to its second season, which aired mid-2020. While the premise – two 30-something comedians playing 13-year-olds in the middle of puberty – seemed bizarre at first, the way Anna Konkle (Anna) and Maya Erskine (Maya) manage to nail the teen experience so painfully well (seriously, you’ll cringe every episode remembering your own teenagerhood) elevates the series from just another comedy to a walk down memory lane.

Pen15 is streaming on Stan

This is a dystopian sci-fi series by director Ridley Scott (Blade Runner, Alien, The Martian). It’s an intriguing exploration of what it means to be human – from our right to give birth to how we form memories – in a world divided between atheism and a religion. The series follows two androids raising human children on a new planet after an Earth-destroying war, and manages to be both uncomfortable and touching.

Raised By Wolves is streaming on Binge

Yes, it’s a documentary series entirely about professional basketballer Michael Jordan and his experience with the Chicago Bulls. But you don’t need to be a basketball fan to find The Last Dance gripping. At its core this is a documentary about the politics and drama that at times overshadowed the Bulls during the height of its fame and success. It’s also truly mind-blowing to watch Michael Jordan play in his prime.

The Last Dance is streaming on Netflix

You don’t get nominated for eight Emmy Awards for nothing. This four-episode Netflix series (inspired by 2012 autobiography Unorthodox: The Scandalous Rejection of My Hasidic Roots) is about a young Jewish woman living in an ultra-Orthodox Brooklyn community who runs away to experience secular life. The series draws you in via Shira Haas’s incredible performance as Esther Shapiro and the captivating story of one person leaving everything they know and immersing themselves in a completely foreign existence.

Unorthodox is streaming on Netflix

Set in an Australian detention centre in the middle of the outback, this limited series was inspired in part by the real experiences of Cornelia Rau, a German-born Australian who found herself in immigration detention. Following four strangers – a flight attendant inspired by Rau’s story, an Afghan refugee, a young father and a bureaucrat caught in a scandal – the series is a harrowing look at the detention experience.

Stateless is streaming on ABC iView and Netflix

Michaela Coel, the writer, co-director and executive producer behind this BBC series, might be the next Phoebe Waller-Bridge after the critical acclaim this series garnered. Like Waller-Bridge, Coel has years of experience in television, most notably as the creator of British sitcom Chewing Gum. But it was I May Destroy You that turned Coel into a star. This comedy-drama is a genius blend of harrowing and laugh-out-loud funny. The series regularly upends expectations and deals with the aftermath of a sexual assault and unfolds into a searing look at consent, trauma, identity and the millennial milieu. It’s Fleabag-season-two levels of perfect television and everyone should watch it.

I May Destroy You is streaming on Binge

While season one of this British comedy-drama series was outstanding, the second season was particularly poignant. The show, which follows a group of high schoolers as they navigate sex, love and gender identity, deals with some truly delicate and complex topics in a hilarious and heartfelt way – a stand-out moment is the bus scene, a powerful look at the ongoing impact of sexual assault.

Sex Education is streaming on Netflix 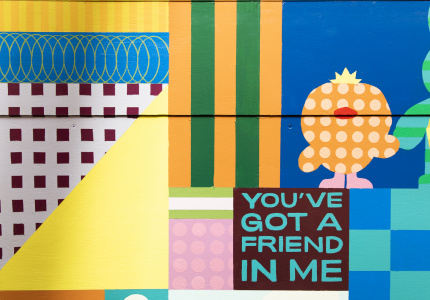