The Troupe Performing Opera in Goldmines and Subterranean Reservoirs

For Queensland’s Underground Opera Company, non-traditional and occasionally dramatic venues are the ideal setting for reinterpretations of classic stage music. In partnership with Mastercard’s Priceless experiences, we take a trip underground. 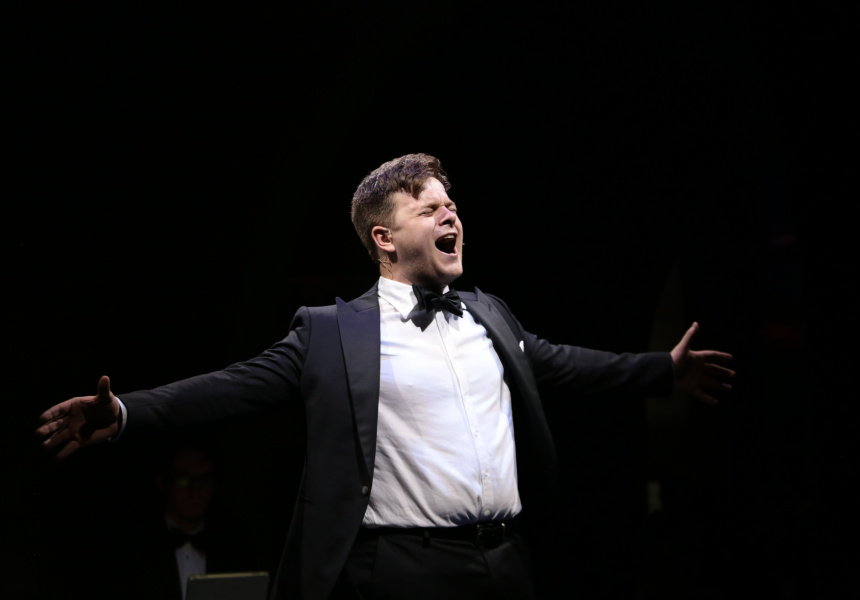 “I like taking an audience where they’re not allowed to go,” says Bruce Edwards, director of the Underground Opera Company. “I took an audience 61 metres down a goldmine in Bendigo, and we were the only company that were allowed to take the public into the Swanbank Power Station.”

This isn’t unusual for the Queensland-based opera troupe. Edwards has also taken his musical theatre shows to Rockhampton’s Capricorn Caves, the ventilation tunnel of the Sydney Opera House’s underground car park, and Brisbane’s Spring Hill Reservoir. “It’s a 150-year-old, heritage-listed, underground water reservoir,” says Edwards. “It’s almost cathedral-like.” Disused since the middle of the 20th century, Edwards oversaw a 2014 transformation of the site that now hosts a very different kind of underground music. “One of the most rewarding parts of it was when we opened the doors for the first show and people would come in, and I’d hear them take that first step onto the stairs and you’d just hear this audible gasp,” Edwards says.

This unconventional approach to a prestige art form is rare (by the by, it’s also one of the unique experiences that Mastercard cardholders can access via Priceless.com. It is unsurprising to learn that Edwards, with his clear love of the subterranean world, spent 25 years in mining before starting the company in 2007. Edwards was still mining and blasting when a love of musical theatre began to take hold. “I was down in a mine in Rosebery in Tasmania,” says Edwards. “Here I was, standing in front of a face-ful of explosives, down the end of the drive by myself and I thought, ‘I’ll have a bit of a sing while I’m down here.’ And I just thought to myself, ‘That sounds pretty good, imagine what some really good singers would be like.’”

Those “good singers” are the cast of players that Edwards has since assembled to form the Underground Opera Company. Despite the non-traditional venues, the performers are all world-class singers, such as tenor Glenn Lorimer, who has previously performed with The London Opera Company, and soprano Dominique Fegan, who worked with the English National Opera. For Edwards, the priceless pleasure of these shows is the audience’s proximity to the performers.

“When you’re sitting in these spaces and you’ve got these people who have been on a world stage performing just metres away from you, it takes something that’s audible and turns it into something physical,” Edwards says. “When I talk to people about the Capricorn Caves in Rockhampton, and I mention our girls singing the Lakmé duet, even now I get goosebumps. I always think about listening to that sound reverberate around that space, and it just surrounds your body. That’s what I love about it.”

For Edwards, the mission of his company isn’t to merely reproduce the classics in a different setting – that’s not his style. “I always use myself as a demographic because I can’t sit through an opera,” says Edwards. “I can’t sit there for two or three hours, I just fall asleep.” The Underground Opera Company splits its time between compilations of musical theatre numbers – titled West End to Broadway – and modern renderings of classic opera.

The latest West End show is titled Timeless, and mixes the golden greats with some more contemporary and left-field choices. “We’re taking pieces out of these shows … and you go ‘Oh, that’s from My Fair Lady or ‘That’s from Jesus Christ Superstar,” says Edwards. “We even like putting in some more contemporary stuff, so there’s things in there from Tick, Tick… Boom!.” The same premise applies to the operatic performances, which blend famous arias with some unexpected modern twists, like Miley Cyrus’s Wrecking Ball coupled with Mozart’s Der Hölle Rache.

The Underground Opera isn’t meant to compete with traditional opera or musical theatre. For Bruce Edwards, his passion is opening up some unusual spaces to approachable music, giving his audiences a thoroughly unique experience.

“All of our shows are really accessible,” says Edwards. “The programs that we put together will enrapture anyone who’s coming to experience opera for the very first time.”

This article is produced by Broadsheet in partnership with Mastercard. More information on Mastercard’s Priceless experiences here.