“Elvis felt like the original punk rocker,” says director Baz Luhrmann, who chose to shake up the soundtrack with contemporary icons such as Doja Cat, Eminem and Tame Impala. Butler’s performance – and the killer soundtrack – stay with you long after the credits roll. Austin Butler busting out his own moves as Elvis Hanks and Butler in an undeniably Luhrmann biopic

As the opening credits roll on the blockbuster movie Elvis, two things immediately become apparent: there’s no denying this is a Baz Luhrmann film, and the actor in the titular role is mind-blowingly, inescapably, irresistibly Elvis.

During the 159-minute film – all of it shot in Australia – audiences are given an intimate portrait of Presley the man – including the origins of his gospel roots, and his being part of the only white family in a black neighbourhood. The film reveals the musician’s vulnerabilities, his immense influence and the crippling love and responsibility he felt for his family – all of it contributing to the phenomenon that was, and is, Elvis Presley.

Rather than a straight biopic, however, the film’s focus is on Presley’s complicated 22-year partnership with his manager Colonel Parker (Tom Hanks), a charlatan who was nevertheless responsible for much of Presley’s commercial success.

The film’s leading man, Austin Butler, tells Broadsheet it was the most intimidating role he’s ever prepared for. The 30-year-old Once Upon a Time in Hollywood actor had the advantage of growing up in an Elvis-obsessed household – his grandmother and mother were both fans – and he was determined to understand what drove Presley.

“You see the artistry, the music or the image of him – and he talks a lot about finding it hard to live up to the image – but what you don’t know is the man, so getting past all that was what was fascinating to me.”

Butler spent 18 months devouring everything he could about Presley – home movies, biographies, documentaries and interviews, constantly interrogating why he moved or spoke or sang the way he did. The actor says the responsibility was “so heavy” that when shooting started he woke daily at 4am, heart pounding, and would then begin working.

Butler embodies – rather than acts as – Elvis. There are similarities between them; Presley had a close relationship with his mother Gladys (Helen Thomson), who died when Presley was 23 – the same age Butler was when his own beloved mother died. And Butler, like Presley, had been a desperately shy child.

When it came to casting Presley, Luhrmann says there was no other choice, particularly after putting Butler through the wringer during the audition; the director had him perform a completely unprepared song. Beforehand, Butler had recorded an audition tape, of the tricky Unchained Melody, recorded at the piano late one night after waking from a nightmare about his mum.

“I maintain that I didn’t discover him – if Austin wasn’t born to play the role there was some other force at work,” says Luhrmann, who co-wrote and co-produced the film as well as directed. “I never had a moment when I didn’t think, there’s the [impersonation] of Elvis and then there’s the person. He had to live it so that Elvis was a person.”

It didn’t hurt that Denzel Washington had personally recommended Butler to Luhrmann, after performing with the actor on the Broadway production The Iceman Cometh.

One of Luhrmann’s greatest strengths as a director is giving period films such as Romeo + Juliet, The Great Gatsby and now Elvis a contemporary context through music. Luhrmann has again teamed up with Australian collaborators: music supervisor Anton Monsted and music supervisor, composer and executive music producer Elliott Wheeler. The pair, along with Luhrmann, lend insight into the significant political and social upheaval during, and in some cases because of, Elvis’s life and music.

While in the film it is Butler who sings all the early Presley tracks, and a mix of both Butler and Presley himself on the later ones, and the soundtrack also contains some of today’s most compelling artists – including Doja Cat, Denzel Curry, Eminem and Tame Impala – that makes clear just why Presley was such a trailblazer.

“All those classic ’50s and ’60s recordings by Elvis, though charming and deeply familiar, don’t capture the shocking, raw experience of young Elvis live on stage,” says Luhrmann. “In those early days Elvis felt like the original punk rocker. That meant we had to create the sound.”

Elvis is released in cinemas nationally from June 23. Watch the trailer here. 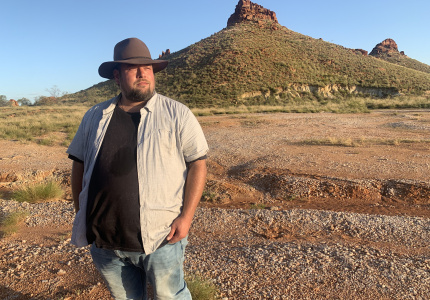