“I wanted to show that soul music is not uniquely tethered to old instruments and nostalgia. I wanted to bring my own version of R’n’B with integrity and vibe and soul.” 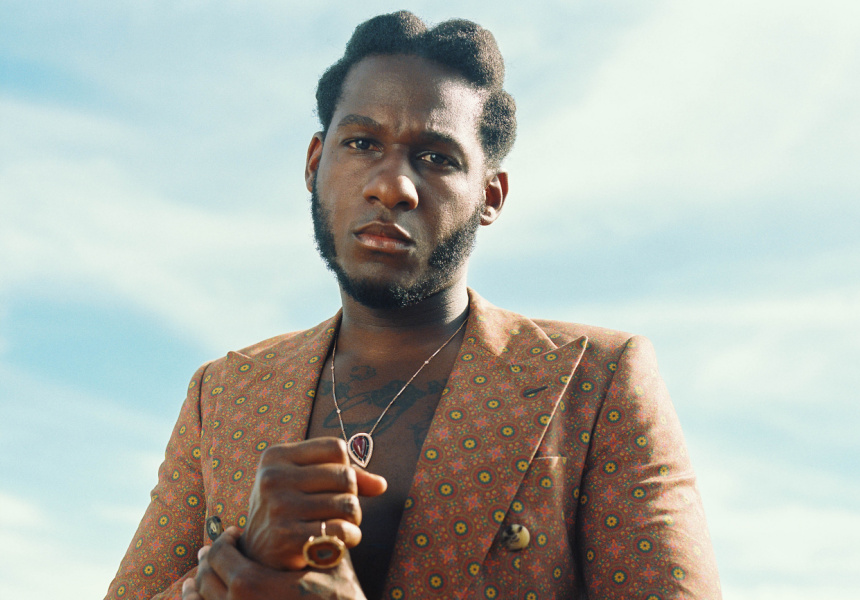 When it was released in 2015, Leon Bridges’ debut album Coming Home was hailed by commentators as a breath of fresh air: a perhaps unusual compliment for music and a musician so rooted in the past.

While the rest of the music industry navigated the rise of streaming services and a new generation of superstars (Kendrick! Bieber! Miley!), Bridges was doing his utmost to dress, act and sound like it was the ’60s all over again. The high-waisted trousers, wingtip shoes and meticulously coiffed hair. The straight-to-analogue-tape, single-take recording sessions. The wholesome subject material of tracks such as Lisa Sawyer (a song about his mother) and River, a contemplative meditation on faith. Unsurprisingly, comparisons between the Texan singer-songwriter and artists such as Otis Redding, Sam Cooke, Ray Charles and other soul and R’n’B greats quickly followed.

Seven years on and Leon Bridges is a different artist to the one he was when he first burst onto the scene. His dress sense feels more now and a little less choirboy-next-door. His fan base has grown significantly and includes former US president Barack Obama. And perhaps most important of all, he also has a different sound – thanks in no small part to collaborations with a diverse edit of artists including John Mayer, Australia’s Avalanches and psych-rock trio and fellow Texans Khruangbin. Just don’t ask him to try to define his new sound.

“I don’t know how to explain it,” he says. “The sound has evolved but I still try to find a sound that’s soulful. There are some psychedelic elements in there. There’s some blues. I love weird sounds. It's kind of an amalgamation of things but the foundation is definitely soul.”

As far as a descriptor for Bridges’ third album Gold-Diggers Sound (2021) – the album is named after the combined bar-hotel-recording-studio in Los Angeles where it was recorded – “definitely soul” definitely works. Taking off where Bridges’ sophomore release Good Thing (2018) left off, Gold-Diggers Sound continues to explore the space where the soul of then – think the rosters of Motown, Stax and other genre-defining soul labels – meets the soul of now. In this instance, the crossover translates to the EDM-influenced groove of Steam and the pensiveness of Sweeter, a response to the death of George Floyd, whose arrest and murder at the hands of police gave the #BlackLivesMatter movement global momentum.

“With Gold-Diggers Sound, I wanted to show that soul music is not uniquely tethered to old instruments and nostalgia,” says Bridges. “I wanted to bring my own version of R’n’B with integrity and vibe and soul.”

Like many performing artists, the last two years have been a challenge for Bridges, not least for a self-confessed introvert who – without the warm glow of the stage to perform on – found himself crawling a little farther back into his shell. Thankfully, he’s back on the road as part of the Boundless tour, a road trip taking in cities that were missed during the initial Gold-Diggers Sound tour as well as some international destinations – including, from late September, Australia. Boundless will be Bridges’ fifth visit to Australia, and he’s looking forward to reacquainting himself with local audiences, playing new songs off the album (plus a few classics) and continuing to reflect on what it means to be a soul singer circa 2022.

“It’s more than chasing an aesthetic,” says Bridges. “It’s an honour to carry the torch of the pioneers and keep it going and tell my own stories. It’s important to preserve my history in that way, and it’s awesome to be on that journey of creating good art. You want to keep the music going.”

Leon Bridges is performing in Perth, Adelaide and Brisbane in September and October. Tickets are available online, starting at $99.