Adam Scott and Patricia Arquette star in a deeply unsettling show. Joaquin Phoenix shares his softer side in a moving buddy film. Daisy Edgar-Jones and Sebastian Stan turn us off dating. And Judi Dench proves her legendary status. 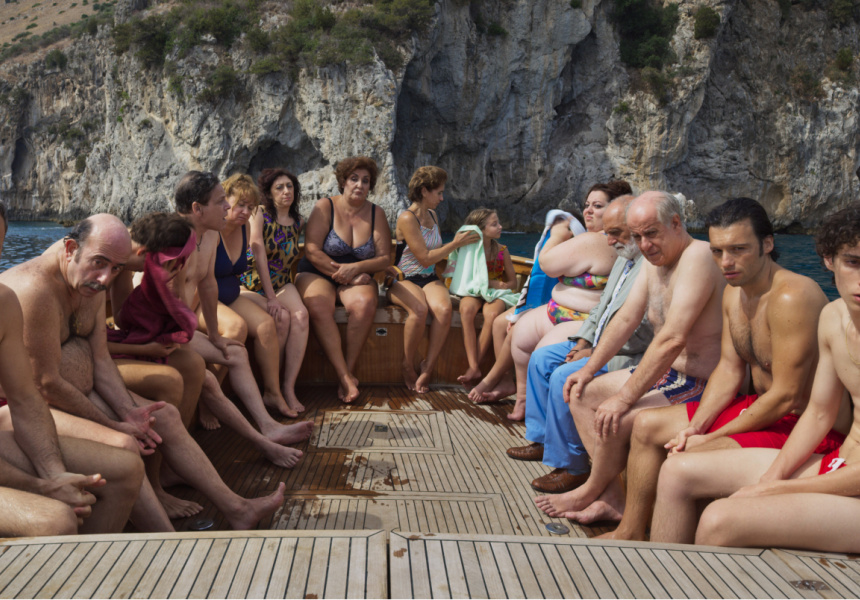 The Hand of God

After the drama of the 94th Academy Awards, it’s a good time to remind ourselves what we love about watching movies. And there are so many great ones to see right now – including, but not limited to, some award-winners. There’s also a gory comedy that’s anything but a Disney romance, Ben Stiller’s oddball TV series, a local music doco and a beautifully shot monochrome flick to lose yourself in.

For a poetic ride: Drive My Car
Scooping up awards across the globe, director Ryusuke Hamaguchi’s quiet, poetic and richly layered film Drive My Car was the first Japanese film to be nominated for Best Picture at the Academy Awards. It didn’t win that category, but it did take home Best International Feature. Former POTUS Barack Obama also gave it a shout-out on his favourite films of 2021 list – and we couldn’t think of higher praise. So what’s it about? It’s based on a Haruki Murakami short story of the same name. Two years after the death of his wife, a guy called Yusuke meets a young woman called Misaki. She’s appointed Yusuke’s driver, and as they spend more and more time together in his red Saab, they reveal more of themselves. It’s a meditative and absorbing film, but it’s also lengthy and slow. Settle in on a rainy arvo for this one. In cinemas.

For gorgeous, gorgeous gore: Fresh
Sebastian Stan (best known as Marvel’s Winter Soldier) and Daisy Edgar-Jones (Normal People) make a lovely couple. And if you only watch the first 30 minutes – before the credits roll – of this Disney+ thriller you’ll feel fulfilled and hopeful about the wild world of dating apps. But this is no Disney princess story. It’s a funny, frighteningly on-point thriller about harvesting human meat. And yes, we said “funny”. Written by Lauryn Kahn and directed by Mimi Cave (her first feature-length), the script seamlessly takes you from tense to choke-on-your-popcorn silly. The film premiered at Sundance Film Festival in January and it’ll reinvigorate your appetite for darkly comic horror, even if it turns you off dating. Stream it on Disney+.

For heartbreaking reality: Flee
Over about four years, filmmaker Jonas Poher Rasmussen interviewed his high-school classmate about being an Afghan refugee in Denmark. The Danish-French filmmaker asked his friend to close his eyes during the dozen interviews to recall what it was like to leave his childhood house, travel by boat and arrive in Moscow, later Denmark – seeking a place to call home. It’s beautifully animated so Amin (a pseudonym) can remain anonymous and also peppered with real news footage from the ’80s and ’90s. In it, Amin shares a heartbreaking secret he’s kept for 20 years. The documentary was nominated for three Oscars: Best International Feature Film, Best Documentary Feature and Best Animated Feature. Listen out for executive producers Riz Ahmed and Nikolaj Coster-Waldau, whose voices feature in the English-language version. In cinemas.

For gripping, bizarre TV: Severance
Who hasn’t wished the 9-to-5 drama would simply evaporate when they walk out of the office? For the employees on a specialist floor at Severance’s Lumon Industries, they live that so-called dream work-life balance. Every time they step into the elevator at work, their memories of the day disappear. The same goes for the memories of their non-working lives – they simply can’t access them during work. One of the most talked-about workplace dramas in recent times, Severance taps into our “always on” workplace anxieties and it adds a bit of existential spice. Apple TV+’s satirical thriller plays out over nine episodes, and though it has a slow start, the mind-boggling premise builds up over time. Directed by Ben Stiller and Aoife McArdle, the stellar cast includes Adam Scott, Patricia Arquette and Christopher Walken. Vogue called it “the Great Resignation thriller”, and we think that nails it. Stream on Apple TV+.

For baby-swap drama, Almodóvar style: Parallel Mothers
In Pedro Almodóvar’s 22nd feature-length film, Penélope Cruz plays a successful magazine photographer called Janis who becomes unexpectedly pregnant after a short affair with one of her subjects, anthropologist Arturo. After deciding to go it alone, she meets younger single mother Ana (Milena Smit) in the delivery room and months later they reunite. The lives of these mothers intertwine and they become lovers. In true Almodóvar fashion, there are secrets, high passions and plenty of vivid colour. It’s not the Spanish director’s high-octane style that you might expect from, say, Broken Embraces or his earlier films, but Parallel Mothers has that warm embrace of his visionary worlds – one that helps suspend disbelief in the baby-swap narrative, at least. It’s arguably more political than his usual style, and the film is all the better for it. Cruz’s performance was nominated for Actress in a Leading Role at the Oscars. In cinemas.

For Oscar-winning cuteness: CODA
Best Picture winner CODA, which stands for “child of deaf adults”, is one of last year’s streaming gems. It’s a comedy-drama that really hits you in the feels. It follows the story of 17-year-old Ruby (Emilia Jones), the only hearing person in her family. She and her high-school crush join the choir club and along the way she discovers a talent for singing. It’s a tearjerker – and if it sounds familiar, it’s because this is the English language remake of 2014 French film La Famille Bélier. Troy Kotsur was awarded Best Supporting Actor for his role as Frank Rossi, becoming the first deaf man to win one after co-star Marlee Matlin’s history-making win 35 years ago. Stream on Apple TV+.

For something charming: C’mon C’mon
Adult-child buddy movies can be sentimental, soppy or just short of the mark somehow, but C’mon C’mon starring Joaquin Phoenix and Bafta-nominated Woody Norman manages to hit the right tone of charming and affecting. Phoenix plays a journalist called Johnny who ends up caring for his nephew Jesse (Norman). The pair travel to New York and though things get off to a rocky start, they become increasingly connected. Writer-director Mike Mills chose to make the film black and white to give it a fable quality. He also said it’d help audiences take the kid more seriously. It certainly makes it a beautiful film to lose yourself in. The Telegraph UK called it a “big bear hug wrapped in celluloid”. In cinemas.

For Tilda Swinton and Richard Ayoade: The Souvenir Part II
The beauty of filmmaker Joanna Hogg’s autobiographical two-parter is that you don’t have to see the first one to appreciate the second. In fact, it’s completely different in tone. It also has a scene-stealing caricature played by Richard Ayoade, which is so OTT that it has you guessing who this character could possibly be based on in Hogg’s real life. The story follows Julie, played by Tilda Swinton’s daughter Honor Swinton Byrne, as she makes her graduate film. There are plenty of film student digs, which are welcome light relief from some of the more brooding scenes. It’s also a bit of a love letter to cinema. Tilda Swinton’s role as Julie’s mum gives it a lovely layer of familiarity. And as Tilda was also in Hogg’s graduate film in 1986, there’s also an added sheen of nostalgia. In cinemas.

For outstanding performances: Belfast
Some critics adored Kenneth Branagh’s sentimental black-and-white movie about his childhood in Northern Ireland. Others called it sugar-coated and not representative of the fraught history of the Troubles. Both sides agree it’s a tender film laced with feel-good vibes, and its cast is exceptional. First there’s Caitríona Balfe, who is mesmerising as little Buddy’s mum. Buddy is played by 11-year-old Jude Hill, who’s picked up several awards for his breakout performance. Jamie Dornan plays his Pa, who is offered work in England. Judi Dench and Ciaran Hinds are Buddy’s adorable grandparents. It’s a story of hope in a conflicted time, written during Covid lockdowns. It was awarded an Oscar for Best Original Screenplay. In cinemas.

For behind-the-scenes: Anonymous Club
Shot in 16-millimetre film and filmed over three years, documentary Anonymous Club takes us behind the scenes of singer-songwriter Courtney Barnett’s live tours before the pandemic. It’s been called a “quiet rock doco” in that we follow Barnett’s life on the road, but as you might expect from the Melbourne-based musician there aren’t many TVs being hurdled out of windows – it’s more candid and vulnerable than that. First-time feature director Danny Cohen shows her struggles with fame, loneliness and confidence in her chosen career. It’s also an intimate look at what life for a touring musician was like before we got hit by the big C. Read Broadsheet’s review. In cinemas.

For escaping to Naples: The Hand of God
This autobiographical film from writer-director Paolo Sorrentino (The Great Beauty) is anything but sentimental. It’s full of familial chaos – each person complete with their own flaws and quirks. It’s stunning – set in Naples in the 1980s. It’s packed with unexpected moments – a city celebrates as footballer Maradona scores a goal on TV. And there’s sadness too, which we won’t spoil. It won the Grand Jury Prize at the 78th Venice Film Festival, and it was nominated for Best International Feature at the Oscars. Press play on this one on a rainy afternoon to feel completely transported. Stream on Netflix.

Updated on Tuesday March 29 with the 2022 Academy Awards results.