Riding in Limos with Client Liaison 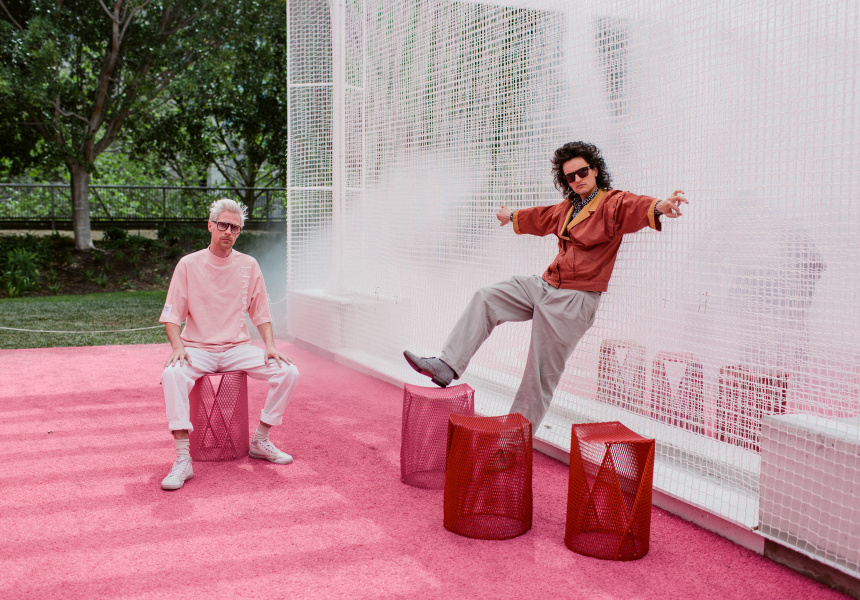 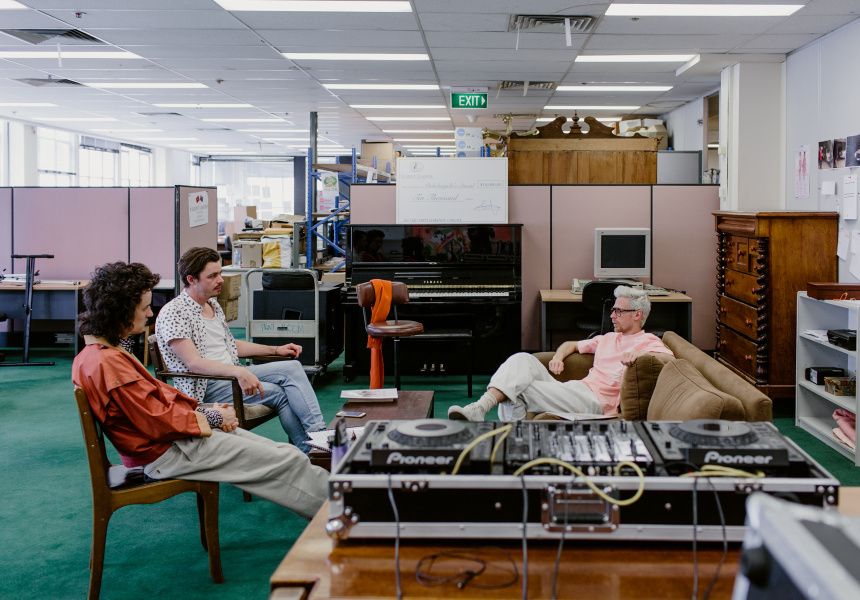 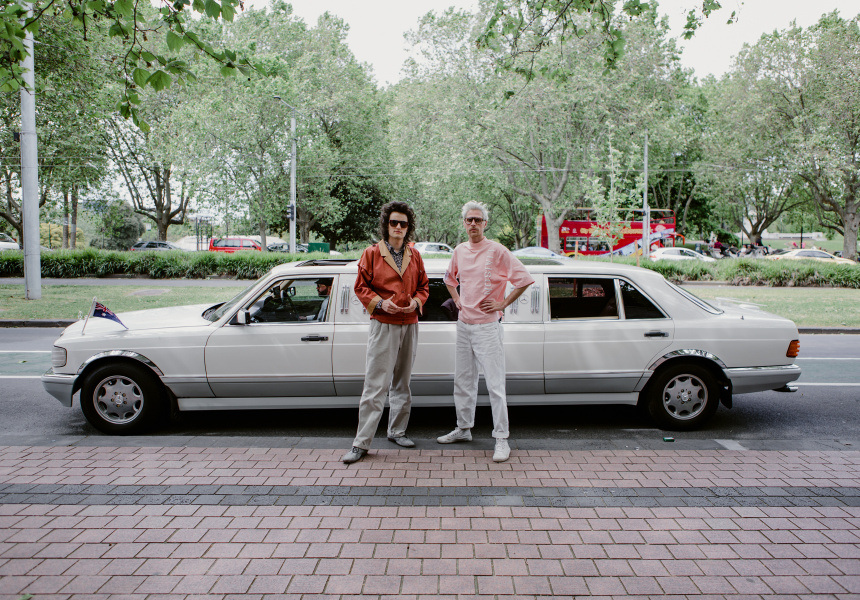 Client Liaison’s office is on the ninth floor of a heritage-listed Art Deco building on Collins Street.

Around the open-plan corporate headquarters, I spot a frosted-glass door emblazoned with “Client Liaison HQ”. There’s a piano, numerous keyboards, turntables. Also: a computer dating from the mid-’90s; fax machines; water coolers; a room-sized wardrobe filled with pastel suits and leather jackets; and boxes containing the Client Liaison designer clothing range, which will launch with the new album.

Client Liaison is all about detail. Everything fits together into one grand narrative in which bandmates Monte Morgan and Harvey Miller are joint CEOs of a successful, high-profile and possibly corrupt company. They’ve recently been granted diplomatic immunity overseas, and they plan to exploit that.

In real life, Morgan and Miller met in primary school and have been friends ever since. Client Liaison is their grand charade, a fantasy world into which they’ve poured themselves.

It’s what their favourite pop artists have done. They cite Prince, his purple aesthetic and his Paisley Park mansion. This office is their own lo-fi Paisley Park, in tune with Australia’s wilfully scrappy, upstart image.

The new album, Diplomatic Immunity, is shamelessly Australian. The first track, Canberra Won’t Be Calling Tonight, opens with a kookaburra’s cackle and samples some particularly rowdy parliament action. The third track has a guest spot from Tina Arena. There’s actually a copy of Arena’s memoir, Now I Can Dance, lying around at the band’s HQ.

“She’s our Beyoncé,” says Miller. “She’s our number one.”

“The song was already kind of an ode to her,” adds Morgan, “and the chorus was out of my register, so we asked Tina.”

Miller and Morgan often get asked about their fixation with Australiana.

“Australia’s a psychedelic, incredible place,” says Morgan. “We grew up in the cultural cringe, where we were constantly looking to America. So it’s new to us to talk about Australia directly.”

Miller adds: “Art tells us who we are as people. There’s a thirst amongst young Australians to celebrate Australia, but there’s this confusion because patriotism has been co-opted by things like the Cronulla riots.”

Being a sunny spring day, we decide to go for a drive. We take Client Liaison’s preferred mode of transportation: a recently acquired, off-white Mercedes limousine with a miniature Australian flag flying on the bonnet. They got a sweet deal on it. The previous owner sold his whole fleet of limousines to fund his move into the sensory-deprivation-tank business.

The inside the limo is all cream leather and wood panelling. There’s talk of “retro-fitting” it: replacing the LCD screen with an old tube television, and installing a hot-towelette machine. “So we can freshen up,” says Miller. “Once it’s done up we can hire it out to our fans. They’ve got a lot of balls and formals to go to.”

Morgan turns to the driver as we take off. “Nice and smooth, please Chris,” he says.

I proceed to the hardball questions. What’s your perfect pop song?

“We’d like to engage more with the Smooth FM audience,” says Miller. “I’m really interested in getting our songs under three minutes.”

Morgan agrees. “All our songs are four minutes and thirty-nine seconds,” he says.

Are there rules for pop songs? Do they need to be short?

“Pop just means whatever’s popular,” says Morgan. “Right now we’re too underground to be pop and too pop to be underground. But we like the idea of being a cult band.”

So who’d play you in a biopic, I ask. (Now they’re posing in the NGV’s hot-pink car wash, where we’ve stopped for a photo opp.)

“We’re working on a film right now,” says Miller. “So we’d play ourselves.”

They’re not sure what format it will take yet, but they’re looking to Prince’s movies Purple Rain and Graffiti Bridge, and also Ozploitation classics such as Les Patterson Saves the World. “A great film,” says Miller.

“His dad directed it,” Morgan points out.

We get back to Collins Street and the Client Liaison limousine pulls up right next to my bike. Morgan and Miller have work to do: they’re launching an album and a fashion line and preparing for a summer tour. They have long-term plans to make it big in either Japan or a small Baltic country. But for now their business is here.

The Australian flag on the limo bonnet waves patriotically in the breeze.

Client Liaison’s new album Diplomatic Immunity is out Friday November 4. A new limited edition Client Liaison Designer Line of clothing and accessories for men and women is available from November 10 on the Client Liaison website and at their pop up concept stores in Melbourne and Sydney.