Following a two-year period of cancellation and controversy, the Tasmanian winter festival delivered a “safer” event of art, music and futuristic sex machines that still outdoes its peers. It’s probably not uncommon to get a little emotional at the burning of the Ogoh Ogoh. The annual torching of the flammable sculpture on the last weekend of Dark Mofo invites you to literally incinerate your fears. To write them on a piece of paper which is then placed inside the thing – this year a striking Tasmanian masked owl dubbed Olivia – along with thousands of others. Then at the festival’s end, the Ogoh Ogoh is paraded through the streets, before being engulfed in flames on the lawns of the Regatta Grounds as kids on shoulders look on glassy-eyed and – as overheard on Sunday night – mewl spooky things like: “It leads the bad spells away till they can’t find us.” Watching the ash spiral in a plume of orange smoke over this year’s scene, I thought about the fear I’d written down: Anchovies filling my mouth. Just kidding. It was something about the people I love coming to harm. You think I'd challenge the spirits now? In my darkest hour?

In short, Dark Mofo 2022 was great. The week I was there saw sold out shows, rammed gigs (official and not), parties to get lost in, a full Winter Feast and a hot artisanal doughnut stand that could not slap up its “sold out” signs quick enough. All this despite a cancelled 2020 and a deeply compromised 2021 (Victorians weren’t allowed to go), which hinged on the furore around Spanish artist Santiago Sierra requesting First Nations peoples from colonised countries and territories donate their blood to a new artwork – an ugly episode revisited last week by Broadsheet writer Will Cox, in a discussion of Mona’s newest exhibitions.

Reparations for this self-own "mistake" will ripple on long beyond 2022. But they're already being felt on ground – be it in the festival’s bumper opening weekend of Indigenous artists and the Reclamation Walk, the sound of First Nations’ performers providing the majority of entertainment (and some of the food) at the Winter Feast, the work behind the scenes still being done, or snarky text messages from friends in Melbourne asking if the festival was “still racist?”

So no coincidence controversy was in short supply this year. (Thanks to the Archdiocese of Hobart’s concurrent exhibition at the Waterside Pavilion, promising to show “bread literally turned to Jesus’ flesh”, arguably the most controversial exhibition in town wasn’t even Mofo’s.) No penis-laden shrine to celebrity; white men being entombed under a road to draw attention to Tasmania’s Black War; liberal use of dead animal parts; or angry letters about upside-down crosses. Creative director Leigh Carmichael himself told the Australian this year’s event just felt “safer”.

But that's true only when referenced against itself. Marianna Simnett: Blood in my Milk

Because this year between hot scones and teaching the kids to make candles, you could step into a disused shop and witness Marianna Simnett’s Blood in My Milk, a five-screen video “exploration of organs, body parts, and infection through visceral imagery of medical treatment and procedures”, which held an unnerving, trance-like pull – despite some walk-ins being unable to stomach images of scalpels slicing through cow teats or rattling close-ups of nasal operations. This in the same festival featuring noise provocateur David Watson playing a screeching set of bagpipe drones as audience members fled; Celestial Bed, a futuristic reimagining of a 1700s fertility machine by Michael Candy, Georgie Mattingley and AGF Hydra that “receives” sperm from human users and then inserts the sperm into others, accompanied by NSFW video footage showing it very much in use; the devastating Angels of Testimony by Meiro Koizumi, a three-part video of a Japanese war veteran tearily confessing to brutal war crimes overlapped by young actors invoking some of his confessions. “The whole city feels heavy,” said a woman leaving the grim exhibit. But having just arrived from Melbourne’s long-gestating Rising festival, where lonesome fire pits were cordoned off by steel fences and signs warning the fire was hot, the idea of being emotionally charred at Dark Mofo felt, at the very least, gloriously autonomous. 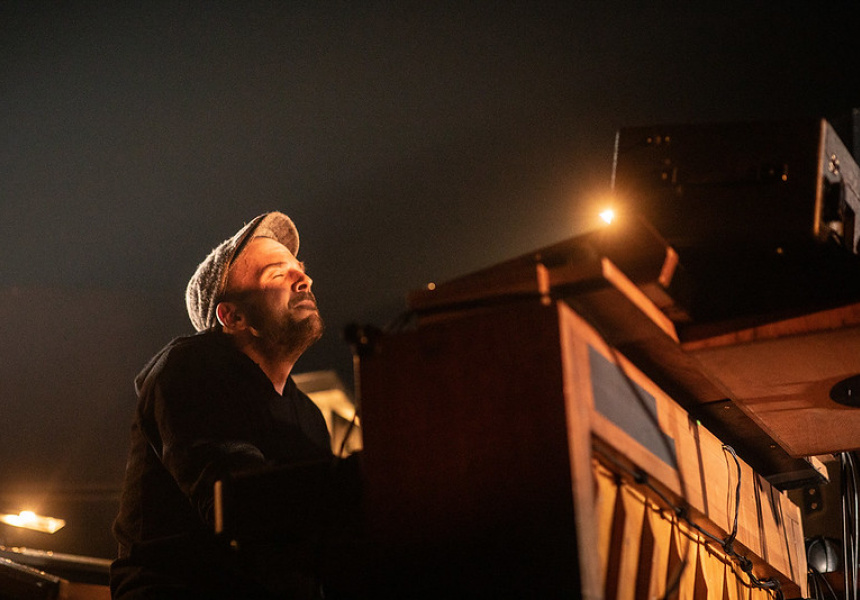 Other moments were much clearer in their gifts. It feels disingenuous to call Nils Frahm an electronic musician considering his skill is bending the analogue to his whim, but the German’s mesmerising set on Monday night had him master a clump of pianos, synths, glass harmonica (theatrically played with gloves dipped in water) and reverb to weave a cascading sequence of moods both deeply moving and danceable. I saw him at the airport the following morning buying licorice – even he agreed it was a good one.

The ever-cool Kim Gordon may have only sung occasionally while playing bass in Sonic Youth for 30 years, but on Saturday night at the Odeon she took to the stage with a singular intensity and ripping drawl that for an hour put her old band in the shade. Over at the experimental Borderlands II program in the dimly lit Theatre Royal, US musician Claire Rousay eked out an affecting set of found sounds sprinkled with piano and field recordings – including the voices of audience members she recorded live on her phone in the crowd. At the excellent Night Mass on Friday night, Perth musician Kučka played a thundering, hyper set to a heaving crowd that literally had the sweat-covered walls shaking, echoing Indonesian duo Raja Kirik’s nuts electro dance party with traditional instruments at Borderlands the night before. And on Monday afternoon down at Ben Salter’s Import Export exhibit inside Mona, local electronic musician and pop absurdist SPOD veered between boneheaded humour, keen observation and thinly veiled self-loathing for one of the funniest, most joyous makeshift sets I’ve ever seen – and within 10 feet of a lovely $35 million Renoir painting. 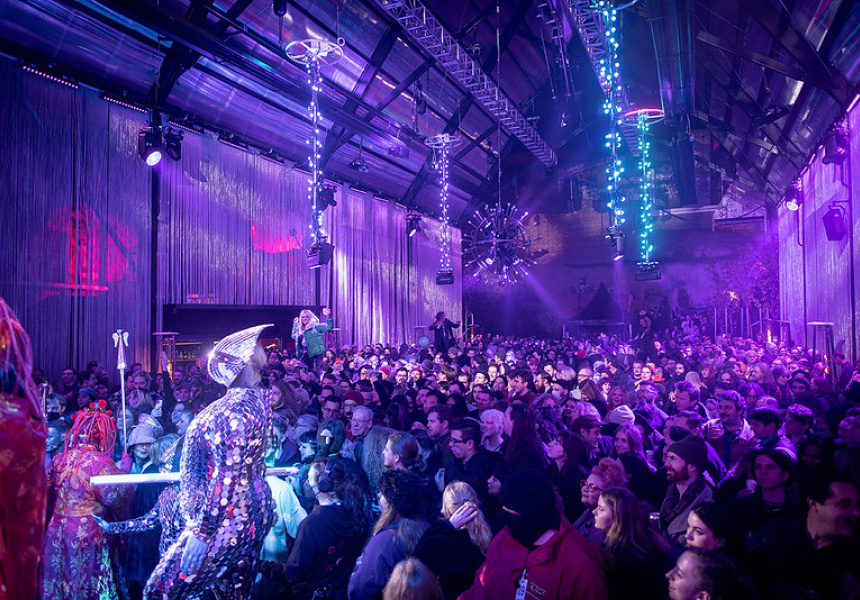 Ping around Hobart for a bit during Dark Mofo and these brief moments start working in concert with each other. You might trace a line between ace Welsh musician Cate Le Bon’s deconstructed pop, which on Saturday night saw her taut band sculpt dislocated ’80s touchstones into crisp new shapes for a thrilled crowd, and the haunting Mona exhibition Phase Shifting by Berlin-based Canadian artist Jeremy Shaw: a seven-channel video work that documents dance cults from different eras, until they unexpectedly – and profoundly – merge into an entirely new space and time. While watching Jason Pierce of space-rock gospel band Spiritualized sit on a chair in the cavernous Mac 2 and speak-sing his earnest declarations of post-drug survival over slashing walls of eclectic guitar pomp, I kept picturing the reversed video of performer Norman Scott being cleansed from a torrent of foul-looking liquid in Bill Viola’s Inverted Birth. And while the decadent produce at the Winter Feast was again without peer, at 6am one morning I still marvelled at the ability of McDonald’s fries to heat their owner’s entire body on an icy walk back to the hotel – though they couldn’t dull the pain of a hotel fire alarm going off three hours later. The things we understand only through rude confrontation. It wasn’t all sliced teats and fun this year, though. Artist Hiromi Tango’s Rainbow Dream: Moon Rainbow installation at Melville Street car park was popular with parents and people with cameras in their phones, and honourable in its intent – to create a space where playfulness, relaxation and joy can emerge. But its execution felt overly simplistic and shallow, particularly against the dark backdrop of the festival. The nearby Anthropoid by Joel Croswell almost seemed to lampoon that carefully cultivated backdrop, with its moody landscape of mannequin apes clutching discarded technology unable to conjure more than a goofy surface reference to Planet of the Apes. Meanwhile both gothic experimentalist Lingua Ignota and post-rock hardcore unit Deafheaven cancelled their shows thanks to Covid-19. Bummer.

But flux is Dark Mofo’s resting state. For every absent headliner, a fresh discovery. For every artistic whiff, an unexpected image bored deep into your memory. For every hole in my glove, a delightful chat with the lady at the Country Women's Association on Elizabeth Street about optimal knitting solutions. For a decade organisers have been saying they don’t know what’s happening next year, and for a decade they’ve consistently delivered the most eclectic, bright spot on the calendar. Once again this year’s festival proved if the red light is on, so are we.