"Dark Mofo is the gangplank between light and dark, conscious and the unconscious, muesli for breakfast and 22 oysters for lunch." 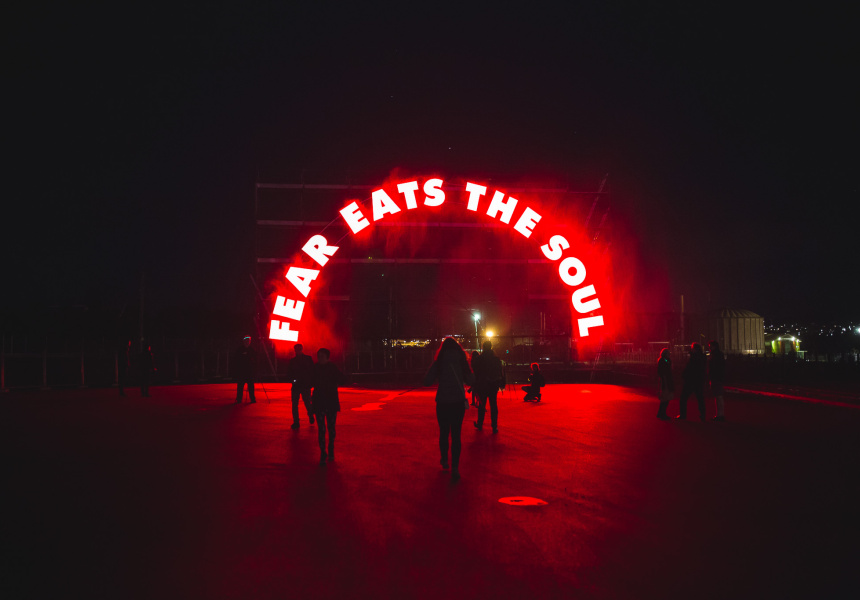 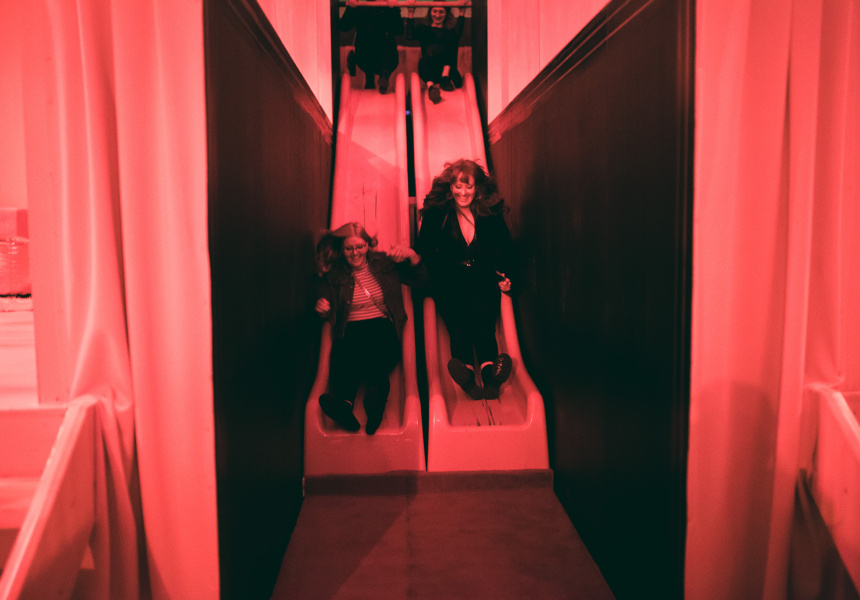 The slide at Blacklist The letter in my hotel room, from Greg Illingworth, general manager:

“We know there are a lot of guests in Hobart to specifically attend the wonderful Dark Mofo events that bring the city to life over winter. We hope the events at the City Hall will not impact too much upon you.”

Which events at City Hall, adjacent to the hotel, was Greg referring to? The face made of red lips and two anuses for eyes plastered at the entry for the Blacklist party? The prism hidden behind the main stage, featuring – when we looked in – a naked woman fumbling with a ball of red wool? Was it the slides that ejected punters directly onto the dancefloor, or the guy in the toilets trying to wash gold glitter from his eyeballs?

Maybe Greg meant the events in Joe’s Garage, an ex-mechanics-turned-oil-and-racing-car bar included in Blacklist this year, where an athletic display of bearded ladies and elastic men contorted themselves for our pleasure? Or Itchy-O, the masked 32-piece electronic marching band from Denver that pounded its way through the party with the subtlety of a Viking longboat crew on an end-of-season footy trip? Or was it Blacklist in general being the seething fulcrum of debauchery so tethered to this wonderful festival?

“As we do not know the full extent of the activities that may occur in our neighbourhood, we are taking some precautions by offering our guests earplugs that are available at reception. We do apologise in advance as we have no control over the locations for this year’s festival and indeed all of central Hobart will be experiencing elevated levels of noise.”

We do not know the full extent of activities. No control. Elevated. Illingworth, you sage.

Now in its fourth year, Dark Mofo is a kind of citywide experiential hinge – the gangplank between light and dark, conscious and the unconscious, muesli for breakfast and 22 oysters for lunch. Organisers have dragged the outsized impact of the event’s 2013 debut through the growing pains (and queues) of 2014, the escalation of 2015 – which cunningly introduced the Dark Park precinct and larger Blacklist – through to a 2016 event that teetered on feel-good. Though an outraged reader in The Mercury lamented, “Parents are subjecting their children at Dark Mofo to a demonic and satanic culture that existed in the Dark Ages”, Mofo now seems settled into a warm embrace from the state and tourists alike. This year more than 275,000 people attended the festival’s events in and around Hobart, and during a fortnight that averaged around eight degrees. Dark.

My disorientating entry point this year was Tim Hecker’s “gig” in the MAC2 precinct on Wednesday night. Inside a fog-drenched room ringed by eye-level purple lights there was nothing to see. Certainly no Tim Hecker, though an oscillating hum of escalating drones suggested he was around. Such was the shroud of mist that what began as a nervy bore soon unspooled into a profound personal meditation, the lights transitioning to show us punters in silhouette gazing in all directions at the foggy maw. We might have been staring at the moon, or a mountain, or a musician from LA unable to see if anyone came to his gig. Nothing was certain. Upon exiting, a common emotion inspired by Dark Mofo took root for the first of many times: re-entering the real world felt alarmingly disappointing.

That was compounded by music-program saviour Eddy Current Suppression Ring, which stepped in on Saturday night to cover for Savages’ last-minute scratching. It was a checkmate move. Where the spiky UK post-punks would have been on-brand and confronting, the mythical Melbourne band reduced all to a plain, naive joy. Even when Brendan Suppression – in his daggy white jeans, ripped T-shirt and golf gloves – scaled the balcony of the Odeon Theatre mid-song to look down on the adoring crowd, it still somehow scanned as an act of calling attention to ourselves. How he and his band divine that remains a puzzle.

King Gizzard and the Lizard Wizard earlier played the opposite of ECSR – submitting us to its vortex of Kraut-ish propulsion and endless musical trapdoors. It performed again at Blacklist later the same night, and even there, surrounded by a battalion of half-naked dancers, its oversize-vulture-head prop, and a hail of confetti cannons, the seven-piece unit’s tight-knight, perpetual escalation was more dazzling than anything in its orbit.

Out at MONA, Cameron Robbins’s remarkable Field Lines exhibition exalted a series of self-made machines making art “based on interaction with natural forces and the elements”. (Visitors might remember his wind-drawing instrument, Wind Section Instrumental, at MONA since 2013.)

Robbins’ work is an elegant marriage between the complex maths of nature and rudimentary attempts at representing it. His sculptural kits include an enormous steel drum that is drawn on according to the tides of the river outside MONA, and a series of tripod-like, light-drawing instruments that scrawl with the wind. I couldn’t help see in the photographs that make up Robbins’s Mt Jim Anomaly, Star Maps series – which use long-exposure photography to capture the path of a light being moved around the edge of a geomagnetic anomaly located in the rocky Victorian high country – lines mirrored in the squiggly decoration pasted on the amps of Swedish death metal band, Tribulation, which had minced around on a theatrical metal-bill the previous night.

Submit to Dark Mofo long enough and these kinds of private patterns emerge. Watching soprano Alison Bell perform with a string trio in St. David’s Cathedral on the longest night of the year, I saw the ancient parquet floor arranged in the same ×+ of MONA’s logo. The cathedral’s lights gently swung to an unseen breeze, recalling the startling effect of United Visual Artists’ Our Time installation at Dark Park, where in a large warehouse, a grid of enormous pendulum lights moved in silent formation, as if tracing Mofo’s own unsettling geomagnetic anomaly.

In MONA I watched a lady accidentally lean her head – her hair – against a plaster cast of a hairless vagina. Also there, a man patiently took an iPad photo of Tattoo Tim, an artist who has sold the tattooed skin on his back to MONA, despite still wearing it; the snapper’s act arguably rendering Tim’s hopeful quote on the MONA O device – “If the project finishes the way it should and the skin is removed and properly framed, then I will exist forever,” – redundant.

On Thursday night I decorated my own body with a gold suit jacket and mild peppermint deodorant and cabbed to The Funeral Party ball, at Turnbull Family Funerals in North Hobart. The grand parlour and crematorium (allegedly still functioning as recently as very ) was decked out like Prince’s fever-dream of the Gatsby mansion. As we laid flowers on a gravestone marked with today’s date, an ashen-faced string quartet made way for DJs, and soon the place was heaving with a wild assortment of the as-yet-un-dead, dressed as mourners, S&M debutantes, goths, or not at all.

As in life, it was the dark corners that attracted. Upstairs rooms hid a labyrinth of vivid happenings: a nude figure resting under a bejewelled shroud; artists sketching portraits of party-goers’ deceased pets (everyone seemed to have a pic or two on their phone); two perpetually harrowed looking nude dancers throwing themselves around a strobing room. One lushly carpeted room simply played Prince on loop.

It was exiting this with a plump purple sweet and “Dearly beloved, we are gathered here today…” looping in my head, that a bald woman in a ballgown asked if I’d like to go “spend some time alone”. “Yes” being the festival-wide safe word, my buddy and I found ourselves being led out of the fracas and across the bitterly cold funeral-home grounds into a sombre shed housing two hearses. “Get in,” said the woman.

Crawling in to stare up at the upholstered ceiling no one gets to see, a pair of headphones began playing music. A voice soon asked me to shut my eyes and imagine who would be outside this very car at my own funeral. Friends? Forgotten ones? What would I say to them? I thought and drifted and then spoke into a small microphone. I looked out the window at my friend laying in the hearse next to me, and wondered what got us. Gluttony? Did we gorge too long at the Winter Feast? Afterwards we lingered outside, wanting to sit with the feeling before heading back. Recalibrated.

The problem with so hedonistically celebrating life in the shadow of death is not wanting to return to real life. Real life isn’t set up for such focus. Dark Mofo is. If the Funeral Party was the kind of funeral we’d want, and we had it, where to now?

Mike Parr’s Asylum installation toyed with one grim path. A 45-minute drive under heavy skies took us out to New Norfolk and Willow Court – once the oldest, continuously run asylum in Tasmania. Parr himself had been here the weekend prior, making drawings in the Woman’s Wing, but now his presence was in artwork strewn through the distressed grounds and video installations that included shots of having his face sewn shut and copious amounts of retching. Against the Brutalist concrete walls, possum shit, broken ceilings, thousands of mirrors people had brought along and placed somewhere in the grounds as admission, and the heavy psychic gloom of a barren exercise yard, with concrete walls so high they confiscated any horizon line, Asylum left a powerfully sour tang on the heart.

“Who was that nude girl covered in gold?” my friend finally said into the silence on the drive home. What? “At Blacklist last night. With the chair?” Oh good. He was reverting us to present day.

Days, nights, parties and pulled-pork share-plates later, at 7am on the final morning of Dark Mofo, I stood in the rain at Long Beach, watching 670 people strip off their clothes and run shrieking into the icy waters of the Derwent River. And I, with my thermals, gloves, umbrella, phone, costume on, thinking about something I mashed into my phone at some point in the early hours: “It’s only too late if you don’t do it now.” Six-hundred-and-seventy fleshy people giddily hugged each other on the wet sand having gallantly crossed that line together, rudely reborn. Some ran to fires on the beach, others lolled in the water chatting to lifeguards sat on paddleboards in the drizzle. I thought back to the previous night’s ritualistic parading and burning of the Ogoh-Ogoh at Dark Park, a creature stuffed with the hand-written fears of anyone of us seeking exorcism at Dark Mofo – this compulsory, compulsive ritual. I envied them all.