Mystify, directed by a close friend of the late rock star, looks past the hits and tabloids to find the real Michael Hutchence. Friends, family and Kylie all pour their hearts out. 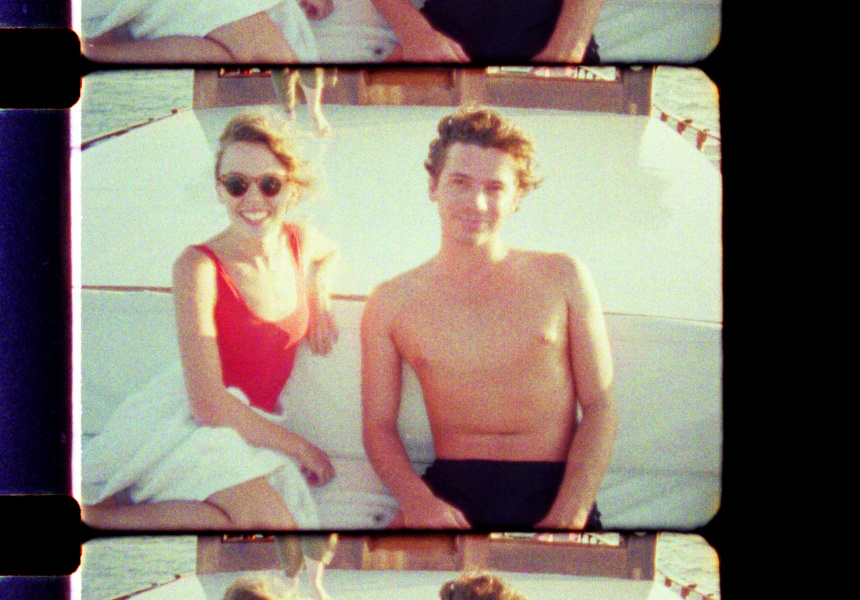 Photography: Photos courtesy of Madman Entertainment
1/6
by Will Cox
Share

In the St Kilda office of film production company Ghost Pictures, a small team is putting the finishing edits on a new documentary, Mystify: Michael Hutchence. A monitor shows a freeze-frame of Hutchence on stage in his late-’80s prime: shirtless, wearing white pants, his hair wild, his body coiled and ready to spring into his signature swagger. He’s beautiful and disarming.

“He certainly had charisma on screen,” says filmmaker Richard Lowenstein. “Whether he was miming or just standing against a wall, he had that magnetism.”

Lowenstein’s spent the past decade looking at footage of Hutchence, compiling this film. Long before that, he counted him as a friend.

The filmmaker’s had a camera trained on the Australian music scene for four decades. In the late ’70s he frequented Melbourne’s Crystal Ballroom in St Kilda, known for hosting seminal Australian bands such as the Go-Betweens and the Birthday Party early in their careers, and big international acts such as the Cure, Iggy Pop and the Dead Kennedys. With co-director Lynn-Maree Milburn, Lowenstein made early video clips for Hunters & Collectors, the Church and Cold Chisel. And he directed documentaries such as We’re Livin’ On Dog Food, about Melbourne’s post-punk scene, and Autoluminescent, about cult musician Rowland S Howard. He also directed Dogs In Space, the quintessential ’80s Melbourne counterculture film in which Hutchence was the lead.

When Lowenstein was asked to direct the video for INXS’s single Burn For You in 1984, he was sceptical about working with Sydney rockers. The band seemed to him too clean-cut. But when he arrived on set in Mackay, everything changed.

“They were these bronzed Sydney boys,” says Lowenstein. “I remember Michael standing amidst these banana lounges, with his mullet and without all the Melbourne bullshit, the pretension. He shook my hand and said, ‘Hi, I’m Michael’. Next thing I know we’re best friends, partying, snorkelling off the barrier reef.”

“I thought, ‘This is alright, snorkelling’,” says Lowenstein. “Melbourne punks do not go snorkelling.”

It became a long friendship and a fruitful creative collaboration, and many more music videos followed. Mystify is brimming with Lowenstein’s obvious affection for his leading man, and Hutchence’s friends, lovers and family are unusually candid. While it hits all the rock-doc notes – the heroic band on the long walk to the stage, screaming fans, partying – it’s more like a personal portrait. Hutchence comes across as charming, sensitive and hard not to love. Various partners, including film producer Michele Bennett, model Helena Christensen and Kylie Minogue, feature prominently and give frank and affectionate accounts of the man they knew.

Hutchence lived for sensual pleasure – food, wine, sex. Then tragedy struck. After being assaulted by a taxi driver in Copenhagen in 1992, Hutchence suffered a fractured skull and lost his sense of smell and taste. His life was never the same again.

Initially Lowenstein was going to make a biographical drama. “I found it the weirdest, most intriguing story,” he says. “It’s like a Greek tragedy. The backstory, the young love, the assault that took away his pleasure in life … But then I thought, who better to play Michael than Michael himself?”

Lowenstein says he gained the trust of people like Minogue, Hutchence's daughter Tiger Lily and INXS bandmates because he was a friend, and he wasn’t interested in gossip. “Understandably the band were a little nervous,” he says. “It wasn’t just them, they were worried about Tiger, about how Paula [Yates, Tiger’s mother, who died in 2000] would be portrayed. She’d been vilified by the press, which was not an honest portrayal. They were worried it would upset a lot of people.”

Lowenstein did audio-only interviews to make people as comfortable as possible. “It was like therapy,” he says. “We tended to forget we were being recorded. A lot of the time we hadn’t seen each other for a long time, and we reconnected.” Hutchence’s brother Rhett provided private footage and images from family Christmases, and Minogue shared very personal footage from a holiday with Hutchence in Europe, the couple gazing lovingly into each other’s eyes. It’s often disarmingly intimate.

Lowenstein tells me about Hutchence’s excitement at being introduced to Nick Cave, and being thrilled when Cave just sneered dismissively at him (they later became mates). He tells me about the time Hutchence was arrested for drunkenly trying to break into someone’s house (long story), and how he wrote the cops an IOU for unpaid speeding fines and signed a few autographs while he was at it.

“He used to tell Kylie about the ego suit you put on when you go on stage and pretend to be a rock star,” he says, “flouncing around and dancing like no-one’s watching. David Bowie, Bono, Elton John … they’re not even their real names. Those are masks. Bono told me once he’s terrified that someone will see behind the mask and see the little Irish schoolboy who can’t believe he’s playing with BB King.

“But Michael didn’t do that,” says Lowenstein. “There was no protection. Just him.”