A Message from Manus Island

A podcast about a man’s life in Australian immigration detention is being listened to all over the world, winning Walkleys and awards in New York. 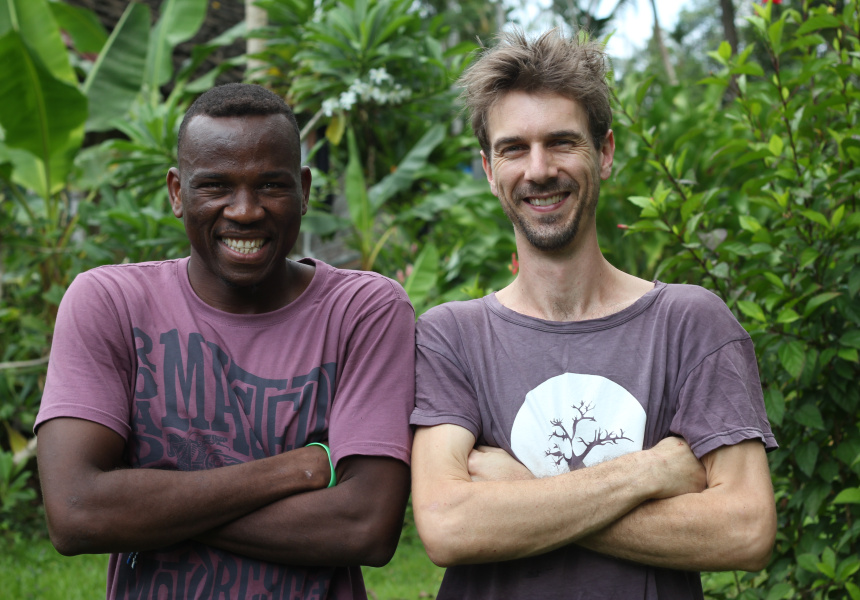 For a year and a half, Melbourne-based journalist Michael Green has been in touch with a man in Australia’s offshore – and notoriously off-bounds – immigration detention centre on Manus Island, Papua New Guinea. The man is Abdul Aziz Muhamat (Green calls him Aziz), and The Messenger is a podcast about his life in detention.

It’s also much more than that.

The podcast is based on thousands of WhatsApp audio messages the men have exchanged via Muhamat’s smuggled mobile phone (obtained via a prison-like system whereby detainees use cigarettes as currency and work with some guards to swap them on the outside for phones and other necessities). The signal isn’t strong enough for the two to speak very often, but their voice messages upload whenever Muhamat moves into range.

When Green first contacted Muhamat in February 2016, he had already been in detention for 864 days.

“Aziz is really eloquent when he talks about what it’s like for a person psychologically and physically to be in that space,” Green says. “And I do think he’s reporting something very important. But he’s also just a really charming guy. He’s got this infectious enthusiasm and he’s a really nice person to speak to. So I feel it’s been a privilege in that sense.”

The podcast (10 episodes in all) is a joint initiative by Behind The Wire – an oral-history project telling the stories of people seeking asylum here who have been detained by the Australian Government – and The Wheeler Centre. (Behind the Wire is how Green was put in touch with Muhamat in the first place.) It was recently named one of three Grand Award winners at the New York Festival's International Radio Program Awards. The Grand Award is the competition's highest honour, and past winners include Radiolab and the BBC.

The Manus Island detention centre is a place most people know very little about. Even for Green – with his experience working on Behind The Wire – who’s there and what goes on behind its fence was a mystery.

Until recently it was illegal for people who worked at the detention centre (guards, medical professionals and public servants) to talk openly about it – the penalty was jail. This changed for medical practitioners in October 2016 (during the making of The Messenger). And the legal implications for other “whistle blowers” is still murky. It has been infamously hard for journalists to access the centre and its inhabitants.

What makes The Messenger so compelling is it’s as much about friendship and human connection as it is an exposé. Its intertwining of the personal and the political is perhaps exactly what the debate and policy around detention – and maybe immigration as a whole – needs.

“Right from the first day we spoke it was like this mix of where does he get his coffee, and what’s the long-term impact of indefinite detention,” says Green. “It’s definitely not a standard journalistic project. It’s been very intensive, he’s my friend now. I have a very strong commitment to him.”

Woven into the quotidian rituals of Muhamet’s daily life on Manus is his story of leaving Sudan, hiding in Indonesia and arriving on Christmas Island by boat, alongside background on the history of Australia’s immigration detention policy. Green also speaks with a psychologist who treated men on Manus Island, including Muhamat, an expert on the Sudanese conflict, and the former director of offshore processing for the Department of Immigration, Greg Lake. Lake resigned when he couldn’t abide seeing people intentionally broken by a government-sanctioned system he describes as being set up to remove their sense of hope and purpose.

We hear about incidents we may have already heard about on the news, but from Muhamat’s perspective. When the Papua New Guinea Supreme Court rules that the detention centre is illegal, you can actually hear men cheering in the background, and Green also talks to Muhamat about the death of fellow inmate Reza Barati during a riot in February 2014.

“Aziz is able to forge on despite things being set up in a way to remove that energy that he has,” Green says. “He’s an amazing guy. But also, it’s a hard struggle, and I hope that that comes across, too.”

Despite the situation, there are moments of lightness between the men. Muhamat is philosophical and can be upbeat and funny. Their conversation swerves into chitchat about Muhamat’s soccer games and Green’s basketball team’s losses. “This isn’t an angry, dogmatic show, this is something that is really funny and sweet and moving,” says Green.

Episode eight – when Green and Muhamat finally meet – came out in early October. “I think it’s going to be a bit of a surprise for people,” says Green. “It was for me. In what happened and how it unfolded – I really didn’t know what to expect and how I would be.

“For me what’s been powerful is to get to know Aziz and what kind of person he is. He’s said that this [podcast] is something he really wants to do because he wants to be heard and he wants to have this role of being a messenger.”

November 30 UPDATE: Last night, The Messenger was named best radio/audio feature at the 62nd Walkley Awards, held in Brisbane. The Walkley Awards are the highest honour in Australian journalism.

Listen to The Messenger here.