Listen to This: Camp Cope

Melbourne band Camp Cope is on the verge of big things. Lead singer Georgia Maq tells us how their debut album reminds her of her tattoos. 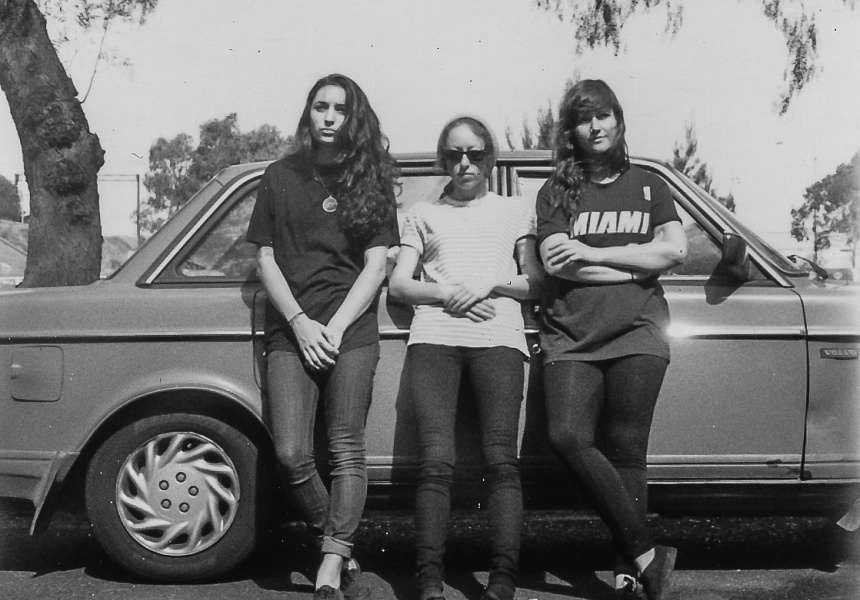 Georgia Maq channels her experiences with depression into something full of heart and energy. She and bandmates Kelly-Dawn Hellmrich (bass) and Sarah Thompson (drums) make raw, punchy music that taps into the Courtney Barnett style of anecdotal speak-sing. But Camp Cope feels more confessional, closer to the bone.

Their self-titled debut album hit number 36 in the ARIA chart in 2016: impressive for a band still in their infancy.

Broadsheet: What musical influences united you as a band?
Georgia Maq: We all had quite different musical backgrounds. I was quite angsty, emo and folky when I played solo. Kelly is a shredder and has played in shoegaze and skramz bands. Thomo is just a solid drummer who knew all my songs really well because she'd be at heaps of my solo shows. The songs I had written that were turned into Camp Cope songs grew into something beautiful because of our differences.

BS: Can you tell us about the process of recording your album?
GM: We practiced heaps for a week, and then went into the studio for two days and smashed them out. We recorded all the instruments live together, and then I recorded the vocals the next day, with a few guest appearances from our friends. We wanted the album to sound rough and youthful. Kind of like how all my tattoos have something a little bit wrong with them. It represents to me that people are just people and we all make mistakes and have flaws, and we should embrace that. I really like that about the album.

BS: And what inspires your lyrics?
GM: My lyrics are kind of like a diary, I write about my personal experiences. It has to be truthful or I wouldn't be able to express the emotion fully, music is my outlet. I'm a person living with depression. I was diagnosed when I was 12 years old. I always knew there was something a bit wrong with me, so I feel really lucky to be able to play music and write as my catharsis, so it's not brewing inside my head.

BS: Fantasy support slot – any era, any artist, anywhere?
GM: It would be my dream to support Hop Along, anywhere, anytime.

BS: What can we expect from your live shows?
GM: My guitar will probably be out of tune.

Melbourne
NGV Summer Sundays on Feb 26 (free and all ages)