Her work is controversial, although she’s not sure why. Being female while using the internet can be brutal – and Lindy West knows that better than most. “I’m a writer and a woman and a feminist, and I write about big, fat, bitchy things that make people uncomfortable,” the US critic, humourist and journalist writes in her weekly column for the Guardian.

That column has also covered topics such as: How not to write about women’s achievements at the Olympics (“Don’t spend more time discussing female athletes’ make-up, hairdos, very small shorts, hijabs, bitchy resting faces, voice pitch, thigh circumference, marital status and age than you spend analysing the incredible feats of strength and skill … ”), public toilets (“ … claims that letting trans people use the toilet is somehow a ‘safety’ issue are founded on literally nothing”) and her decision to leave Twitter.

She is touring Australia in February and March, beginning in Melbourne before travelling to Brisbane, Sydney (for the All About Women Festival) and finishing in Adelaide during Adelaide Writers’ Week.

As a writer (also for Jezebel.com, GQ and others), West has a straight-shooting approach to critiquing everything from fat (“When you … keep us shackled by shame and hunger, obsessing over our flaws, rather than our power and potential; when you leverage all of that to sap our money and our time – that moves the rudder of the world.”); rape jokes; Disney’s Moana; and Batman Vs Superman (“153 minutes of a grown man whacking two dolls together”), to Donald Trump and US gun control. When she lampoons systems that sideline marginalised groups she does it with wit, intelligence and a fullness of heart that comes from a belief that good writing and comedy can change the world for the better.

For her efforts she is abused relentlessly online (as well as applauded; in 2013, she won a Social Media Award from NYC's Women's Media Center). She generally views it now as a fact of life, but when one “troll” created a fake Twitter account and posed as her late father, West – after her initial devastation – couldn’t let it slide. The story of how she confronted him is the subject of an episode of radio show This American Life.

Now she has written about her experiences on and off the internet in a book of personal essays called Shrill: Notes from a Loud Woman.

In her own words, here is Lindy West:

One thing I’m always trying to do with my work is to normalise things that have been stigmatised. For a long time it wasn’t cool to be a feminist, and there is still a huge backlash against feminism, when, really, believing that women deserve equal rights, and do not currently have them, should not be a controversial stance.

It’s easy to oversimplify who you think they are. Like, “They’re all teenage boys living in their parents’ basements”. I think the reality is much more alarming and a lot of internet trolls – actually, I don’t even want to say “internet trolls” – a lot of people that engage in vicious online harassment and stalking are “normal people”. That’s how prevalent racism and misogyny are in our culture. So [with the This American Life episode] I wanted to get to the bottom of it and nail down one person who did this incredibly emotionally violent and egregious thing. And look them in the face and see who they are. And it turned out it wasn’t a teenage boy, it was an adult man ... Thinking of online harassment and sexism and racism and transphobia and homophobia as these aberrant behaviours that only outliers exhibit is dangerous because it’s not true and it lets a lot of people off the hook.

On explaining the obvious

Every single time I have to write the same article again explaining some non-controversial aspect of feminism, or just women’s experiences or my own experience … it perpetuates this idea that feminism, or women’s equality – or racial equality or any of these social-justice movements – are one side of a debate. If you have a feminist on your TV show, you don’t also have to have a violent, rabid anti-feminist who believes that women belong in the kitchen and shouldn’t vote. There’s no debate. It’s been settled. We don’t have to entertain the bad ideas of people who think that I’m not a full human being or that people of colour, or trans people or gay people, or fat people or sex workers are not full human beings.

There’s nothing more satisfying that reclaiming a term that’s been used to hurt you. It’s great to say: “I’m shrill and there’s nothing wrong with that.” It’s just another aesthetic constraint we put on women – it’s entirely gendered, we don’t call men shrill. It’s saying to women: “Your voice is not pleasing to me”. Well who cares? I don’t care. I’m not going to be quiet because you have some weird, antiquated notion about women being gentle flowers.

On “coming out” as fat

[Calling myself fat] took a long time. It was a long, slow process. It was something I had to do in order to live a complete life, in order to be happy, and not live everyday punishing myself and feeling anxious and ashamed. I think women waste so much time and money trying to conform to this really specific ideal and I think that to some degree it’s a deliberate way to put limits on women’s power and potential. And I don’t want to be part of that system anymore. So it was important to me on a personal level and on a political level.

What I think is important – especially for privileged people like myself; as a straight, white woman who’s financially stable – is to seek out and read the perspectives of people who have been marginalised and silenced and whose voices are not represented in mainstream media. I’m trying to talk less and listen more.

On writing a book

It’s actually much easier to write really personal things in a book than it is on a blog because writing a book is so solitary ... the idea of anyone else reading it is an abstraction. So I think that ended up making the book a lot more personal than it would have been writing for a column or a blog. When I’m writing something that’s going to go up online the next day, I’m hyper aware of every single thing I’m putting in it and how it’s going to be perceived and how I’m going to be treated. And I think that served the book well – not having that anxiety. And feeling like I could really be free to be vulnerable and not second-guess myself.

Sunday March 5 – Sydney Opera House (as part of the All About Women Festival).
Book tickets here. 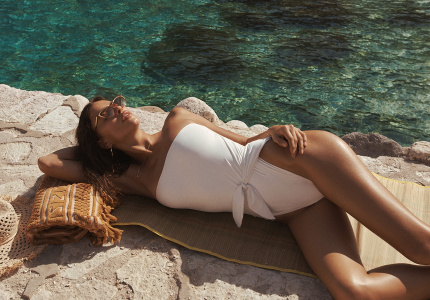