The Lifted Brow Reaches a Milestone

In an uncertain time for the arts in Australia The Lifted Brow has been publishing some of Australia’s most interesting new writing for almost a decade. As the internationally celebrated magazine launches its 30th issue, its incoming editors (Annabel Brady-Brown and Zoe Dzunko) pay tribute to those who came before. Ellena Savage at a recent launch for The Lifted Brow. The longest-serving editor of the magazine to date, Savage and co-editor Gillian Terzis have made way for new editors Annabel Brady-Brown and Zoe Dzunko. 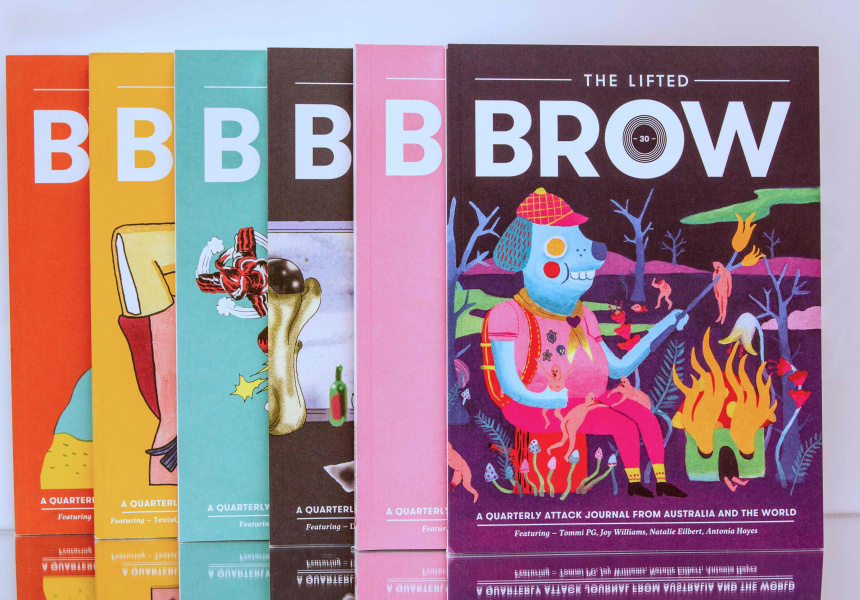 The Lifted Brow launches its new magazine this Saturday. It’s the 30th issue since the 2007 inception of the Australian “attack journal”, and marks something of a swansong for Ellena Savage and Gillian Terzis, who have co-edited the magazine since its makeover as a quarterly in early 2015.

As Brow staff since 2014, we’ve been fortunate to witness firsthand their formidable talent, and share in the generous, supportive culture they cemented. As incoming co-editors preparing to fill their shoes, we quizzed Savage and Terzis on their time at the magazine that we and many others gratefully pour our lives into.

Let’s start at the beginning. How did you both get involved with the “Brow”?
Ellena Savage: It was in 2011, just after I had finished my BA. I had spent the previous year editing Farrago (Melbourne University’s student magazine) and had this idea in my head that after uni I would just, like, be a writer and write all the time (laughs). Of course that doesn’t happen. Ronnie Scott (who ran the Brow at that time) put a call out for an arts editor position and I answered. That ended up being the editor job of Middlebrow (the arts and culture lift-out section of the magazine in 2011–14), which I did for three and a half years.

Gillian Terzis: I think my first contact at the Brow was through Savage, maybe in 2011? I was working these really torturous journalism jobs and it took me a little while to work out that wasn’t what I wanted to do, I wanted to do more exciting writing. So I wrote a money column: it was about the economics of everyday life but also just, oh this sounds so wanky saying this, but capitalism! I think I was actually a really terrible columnist. (Laughs). I was always missing my deadlines, and you were so patient with me, Ellena.

Four years later, the magazine relaunched and you were co-editors, along with Stephanie Van Schilt.
ES: I heard Geoff Lemon (editor of Going Down Swinging ) once say the existence of literary journals is predicated on the strong-arming of writers into editorial positions that they don’t want, which they do with time they don’t have. That’s sort of true, but doing Middlebrow was such an opportunity for me to exist in a space of other writers and be part of their work – not just my room.

GT: Definitely. I really understated the importance of being connected to other people early on in my career. I was very content, I thought, to be isolated and to be beavering away in my apartment. Getting involved with the Brow and other journals opened me up to this space where people could talk and exchange ideas and just have that camaraderie and support. That’s really important for writers, and editors.

Looking back, what are the highlights from the work you’ve published? Is there any piece you’re most proud of?
ES: This is such a hard question! I’m really proud of the longstanding column of Jana Perkovic’s, The Critic. I haven’t seen that kind of criticism with that continuity in any other literary space in Australia. I think her voice, and the form that was available to her because of The Lifted Brow, ended up producing and will continue to produce a really outstanding body of work. I’m proud to be part of a space that made her reach that audience.

GT: I don’t know if pride is the right word because I don’t want to claim ownership for someone else’s writing, but I was exceptionally pleased with the way Shaun Prescott’s piece on the death metal band Sadistik Execution turned out. It was a last-minute commission, someone had dropped out, and I’d been wanting him to write for us: he came back with this idea and I was like, “Yeah, this could be interesting,” but I didn’t expect it to be so politically switched on – though, of course, it was always going to be that way because he’s such a smart, funny writer. It came at the right time; the lockouts in Sydney were getting a lot of press and there were attacks on youth more generally by conservative governments around Australia. It shows how the Brow can, in its way, contribute to public debate, without sort of clickbait-y op-eds. We have our own way of dissecting what happens in public and cultural life. So yeah, that was one of my moments.

Following the recent defunding of “Voiceworks”, Anwen Crawford wrote in her “Monthly” blog, “It takes a certain kind of young person to want to volunteer weeknights and half their weekends to the running of a literary magazine.” What drives you?
GT: I’m interested in art primarily as a political project, but I’m also very compelled to write and to edit and to be part of a lively community of writers. Being part of a project that’s bigger than myself – that’s something that’s political but also very personal. I didn’t realise when I started with the Brow how attached to the publication I would become. I thought, “Oh, I’ll squeeze it in between everything else that I’m doing.” It soon became obvious that it would just consume all my time. It’s a rare thing to be in the company of people who are as passionate about a project as you are. Everyone is working for free. Everyone is dedicating their time, doing the best they can, and that’s inspiring. That’s why I stuck around.

ES: It’s the like-minded people who are devoting their time to this project. And also knowing we have this space to do whatever the fuck we want is so liberating and so rare in Australia. The Brow is completely independent; we occasionally get a grant here and there, but having that independence, I think, is what makes it as good as it is.

GT: This idea of being an artist in the marketplace – it’s a constant tension between how to survive and how to meet certain imperatives, and we’re very lucky that we don’t have the same set of concerns: we don’t have to meet an advertising agenda or sell a bunch of copies. I mean, obviously we want to – and I think you say this in the last editorial, Ellena – “shift units”, but it’s not just about shifting units. We have a lot of freedom.

Issue 30 of The Lifted Brow launches this Saturday June 11 at Hugs and Kisses, with music from Two Steps on the Water, Jessica Says and Pillow Pro.

This interview has been edited and condensed.