Hugo Weaving’s Latest Film, Hearts and Bones, Is an Uplifting Story About What It Means to Be Australian Today

The beautiful film, set in western Sydney, made its debut at the Sydney Film Festival but has been fast-tracked for a digital release. “[It’s] a very positive piece about who this country is now; we need those stories about community, particularly when we’re all isolated.” 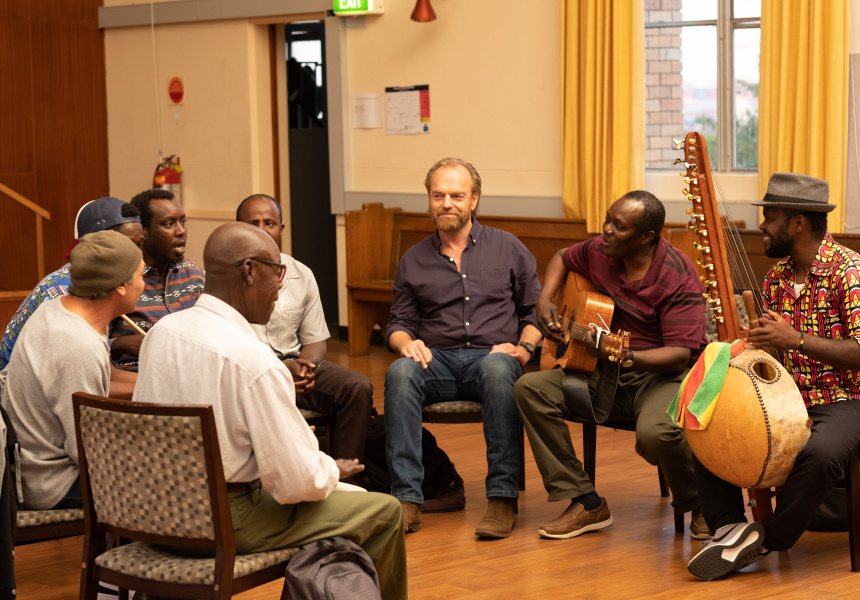 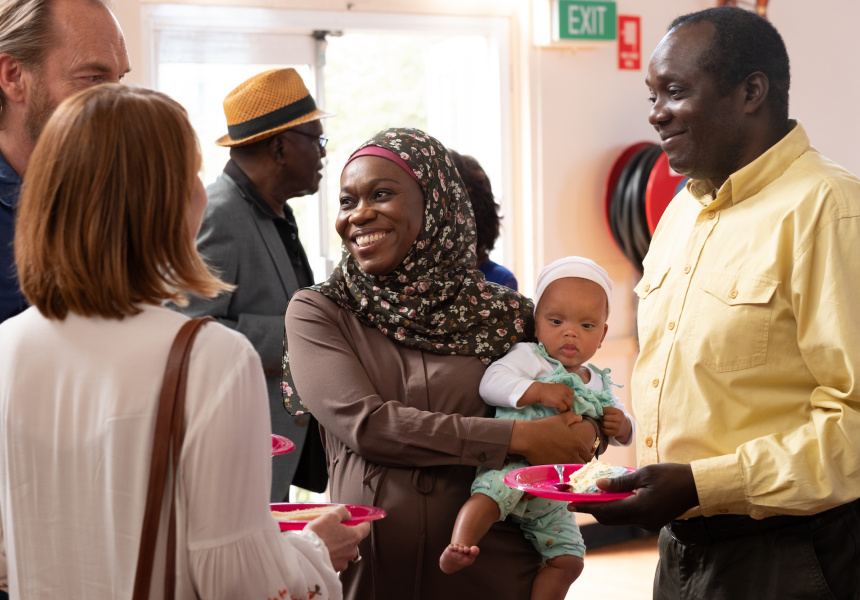 It’s a mark of Hugo Weaving’s character that when he learned many of the people cast in his new feature film Hearts and Bones weren’t actors, he was concerned that he may prove a headache for director Ben Lawrence.

“I actually thought I was going to be much more of a problem for Ben in a way,” Weaving, a multi-award-winning stage and screen actor known for his roles in Lord of the Rings, The Dressmaker and The Matrix trilogy, tells Broadsheet. “I was very mindful that I’d been cast because Ben likes what I do, but there’s a particular aesthetic he wants and needs and is required for the film, so I had to bury any inflection or performative aspect. For this film there can be no visible performance [because] the camera is like a fly on the wall.”

He needn’t have been concerned. The Hearts and Bones cast – which includes Weaving and fellow seasoned actors Hayley McElhinney (Doctor Doctor, The Babadook) and Alan Dukes (The Little Death, Last Cab to Darwin) alongside newcomer Andrew Luri and Nigerian-born American actress Bolude Watson – is faultless in this raw, engrossing feature.

Originally intended for national and international cinematic release following positive receptions at the Toronto, Sydney and Melbourne film festivals, the Australian feature will now be released digitally due to the temporary closure of cinemas.

Filmed and set in western Sydney, Hearts and Bones details the unlikely friendship that develops when Sudanese taxi driver Sebastian Amad (Luri) tracks down acclaimed photojournalist Daniel Fisher (Weaving) and begs him not to go ahead with a photographic exhibition featuring images from a massacre 15 years earlier in his South Sudanese town. The photos threaten to destroy the happy life Amad has created in Sydney with his pregnant wife (Watson) and their daughter, who know nothing of his past traumas. Fisher is barely coping with the increasing physical and mental toll brought on by decades working in war-torn countries, on top of trying to heal a troubled relationship with his loving partner Josie (McElhinney).

Following its Sydney Film Festival debut, Variety noted Hearts and Bones was “a heart-wrenching but ultimately uplifting story of friendship [that] explores issues of personal identity, the ties of family, friendship, masculinity and fatherhood, all set against Sydney’s diverse and expanding cultural divide”.

The film is the debut feature from writer-director Ben Lawrence, who co-wrote the screenplay with Beatrix Christian (2018’s Picnic at Hanging Rock and Jindabyne). Weaving first read a draft of the script in 2002 and quickly agreed to come on board.

“It’s a great story about serious issues and trauma on a global stage, but played out in a very domestic, suburban Sydney setting, and I liked that,” says Weaving. “I like the fact the central characters are two couples dealing with childbirth and building houses and living together, and the different experiences they have of that. But [also] how they’re negotiating trauma in their own lives and how that brings them together.”

The friendship that developed between Weaving and the cast is palpable on screen, particularly with Luri, a Sudanese-Australian who was driving a garbage truck in Melbourne at the time of the audition. Other members of the cast bring their own real experiences to the characters, resulting in an honest and heartfelt portrayal.

Knowing many of the cast members were drawing on lived experiences, Weaving threw himself into researching documentary photographers such as American James Nachtwey and Brazilian Sebastião Salgado, although photography is an area that has long fascinated him.

“I have a massive bookcase full of wonderful books of photographers from around the world,” he says. “A picture captured by a journalist from a war zone where many people can’t go tells you a story nothing else can tell. They’re fundamental to journalism and to information and to how we understand the world we live in. [But] it’s a terrible profession to be in; many are killed. There’s an inherent danger having a camera on the frontline.”

At its heart, the film is an exploration of community and what it means to be Australian today. But Weaving is deeply concerned local stories like these will be lost following the government’s recent suspension of local-content quotas for Australia’s television channels. He implores the government to introduce local-content quotas for digital giants such as Netflix and Amazon Prime.

“If the government is serious about creating jobs in this country, the best thing that could happen is the digital platforms be obliged to make local content,” he says.

Despite being constantly in demand overseas, Weaving chooses to remain in Australia, telling Australian stories. “The Australia that works best is an inclusive, patient, respectful one where we celebrate cultural differences,” he says. “Hearts and Bones is a very positive piece about who this country is now; we need those stories about community, particularly when we’re all isolated.”

Hearts and Bones will be released digitally on May 6 on iTunes, Google Play, YouTube, Sony Playstation, Telstra and Fetch TV, with DVD release following on June 3. There's also a free virtual Q&A on May 15 with Hugo Weaving, Andrew Luri and Ben Lawrence, moderated by Sydney Film Festival Director Nashen Moodley. You need to register here.