This time around there are house parties in secret locations, installations on highways, Mo’Ju, Hobart’s skyline awash with lasers and an aerial artist performing for eight hours a day on top of a melting ice block above Cataract Gorge. Plus lots more. 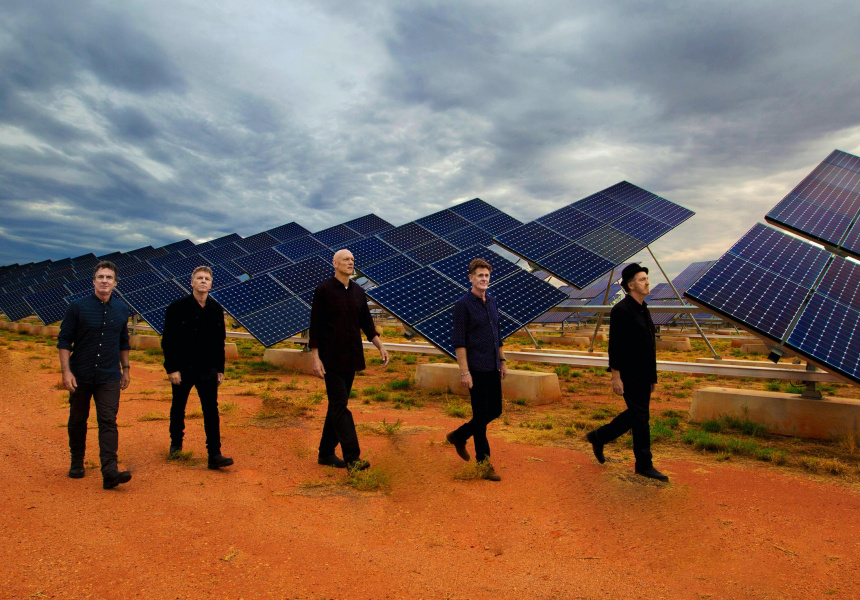 Tassie’s eclectic summer festival, Mona Foma, has announced its extensive list of performers and artists, with a big focus on local Tassie performers. The dual-city affair will roll out over two weekends, first in Launceston (Friday 21–Sunday 23) then in Hobart (Friday 28–Sunday 30).

One of the headliners is not from Tassie but is performing its final tour. Legendary Aussie band Midnight Oil will play concerts in both cities with a playlist that includes include tracks from its forthcoming album, plus classics and recent music from the Makarrata Project (inspired by the Uluru Statement from the Heart).

Both cities will also host some of the usual festival events, such as Mofo Sessions – an evening of concerts with lots of bars and food. The line-up includes Gwenno, Mo’Ju, The Chills, Danny Healy Quartet, the Jason Whatley Quartet and more. There are also other faves like Morning Meditations and Faux Mo, the latter inviting punters to take part in a curated house party experience in secret locations in each city.

Filipino/Wiradjuri artist Mo’Ju will be joined by the Tasmanian Symphony Orchestra and Orchestra Victoria in Hobart and play with her band in Launceston. Also in Hobart and Launceston, giant cement mixers will be transformed and then roam the streets throughout the fest for Monster Trucks.

If you’re into performative performances, book tickets to Fertile Ground. Mona Foma says it’s “a ground-breaking participatory performance, as two dancers and the audience engage with a brutalist pile of concrete over four hours”.

Launceston’s stunning Cataract Gorge will once again be a festival host. For Thaw, a lone aerial artist from renowned physical theatre company Legs on the Wall will perform for eight hours each day while harnessed to the top of a sculpted 2.4 tonne block of ice. It will slowly melt as it hangs over the gorge. As you explore, musicians Karlin Love and Jon Addison will serenade you with music inspired by the area.

If you’re driving along the Midland Highway (it joins Tassie’s two largest cities), Trawlwoolway artist Julie Gough will be posting four silhouettes inspired by the 1830s government propaganda known as “Governor Arthur's Proclamation to the Aborigines”. They join the 16 existing colonial silhouettes and are said to provide a more truthful account of the history of invasion.

Quandamooka artist Megan Cope is going to create sonic sculptures from discarded mining relics and piano strings and more, and then musicians will play them.

And exclusive to Hobart is Beacon by acclaimed international artist Robin Fox. Fox will use technology to project powerful lasers above the city, while an accompanying app will share stories of the mountain from artists Sharnie Read and Theresa Sainty. Dozens of ’70s-era organs have also been rescued from the tip and will be played for the premiere of Organ Donor.

Mona Foma will require proof of vaccination for all ticketed events and masks may be required in some settings.