This Must-See Play Spotlights Cultural Appropriation, Queerness and Friendship (Plus Much More)

“Any young, black or brown woman that watches this show, they absolutely inherently understand the experiences,” says co-director Zindzi Okenyo. 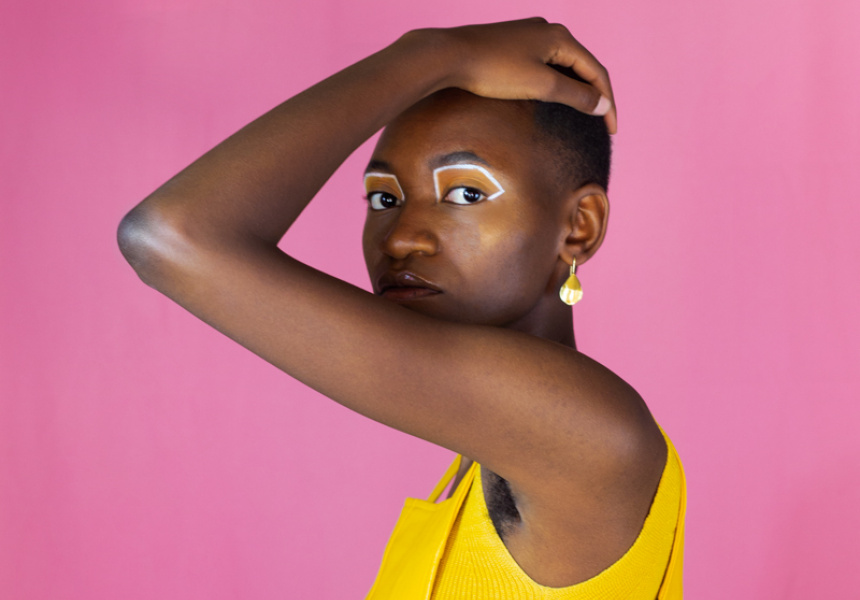 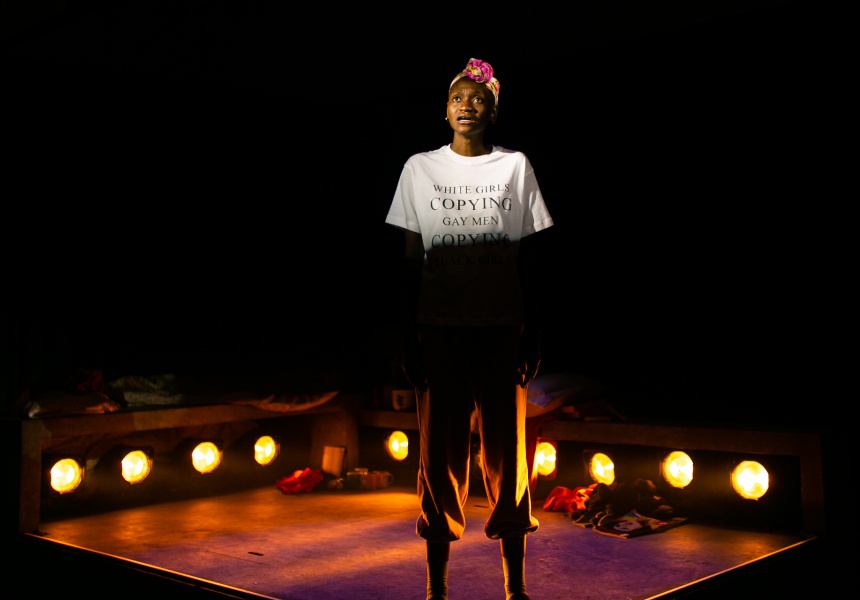 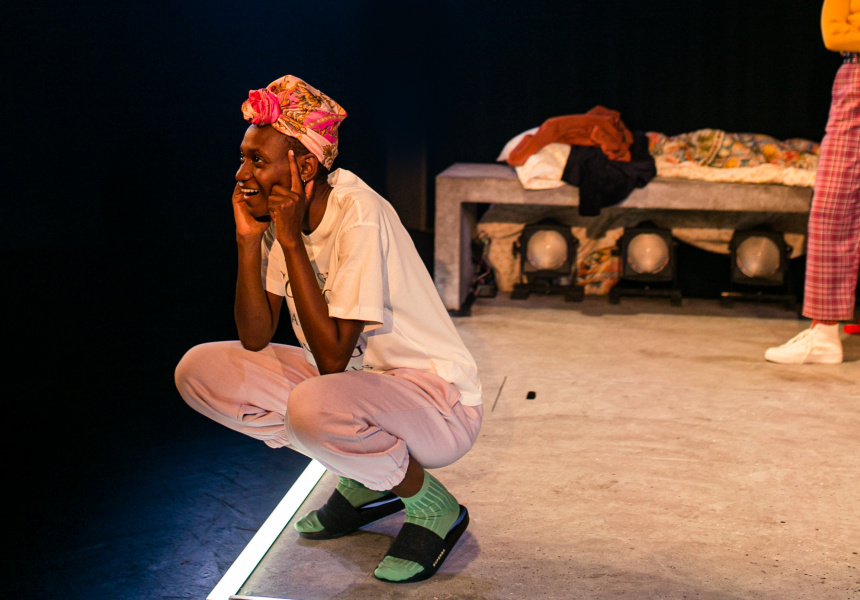 Seven Methods of Killing Kylie Jenner, the whip-smart debut production from young British playwright Jasmine Lee-Jones, journeys through blistering, rhythmic dialogue about the commodification of Black bodies, colourism, friendship and queerness. It made its debut at London’s Royal Court Theatre in 2019, and last year the Australian production, starring Moreblessing Maturure and Vivienne Awosoga, received accolades from audiences and critics alike. This year the play returns to Sydney for a second run, before heading to Brisbane’s La Boite and Melbourne’s Malthouse Theatre in February and July respectively.

“I was reading it on the freshly opened Northwest Metro under my mask, and my cheeks were sore from reading it,” says Zimbabwean-Australian actor and interdisciplinary artist Maturure. “I was like, ‘This play is wild – there’s the internet on here! Plays don’t do this,’” she recalls.

Only two years ago Maturure came to the realisation that, as both she and friend Gemma Bird Matheson were women of colour, it was unlikely they’d ever be cast in an Australian play together. It was a disheartening thought, but it drove Maturure to focus on finding plays where two women of colour could not only be on the same stage, but could lead, direct, produce and represent themselves in a way that no other plays in the country were doing at the time.

The first Australian season of Seven Methods, in April 2021, was a sell-out success. Actor Tessa Thompson and singer Rita Ora were reportedly among the audience members at Darlinghurst Theatre.

Nuanced, funny and heartfelt, the powerfully modern play ignites political debate. It opens on a darkly funny note, with Cleo (Maturure) and Kara (Awosoga) dragging a body across the stage and hiding it beneath a bedroom floor. Then, a real-life tweet by Forbes magazine spreads across a large screen above the bedroom, announcing that Kylie Jenner has become the “youngest self-made billionaire ever”.

The headstrong, 20-something-year-old Cleo has plenty to say in response to this tweet. For her, Jenner is not “self-made” but born into wealth and unashamedly profiting from the appropriation and commodification of Black women. She starts an ironic thread outlining the many potential deaths that could befall Jenner. A tweetstorm ensues – with gifs, memes, internet slang and emojis displaying on the screen overhead, while, offline, Cleo and Kara navigate issues of colourism and queer identity.

The whole 2021 production – directors, designers, writers and cast – were predominantly women of colour. Co-director Zindzi Okenyo tells Broadsheet, “I think I can speak for all of us and say that we’re so proud of what we’ve achieved. It’s not like we didn’t come up against problems.

“We made this work in such a short time, with so little funding, and for most of us it was the first time we were in this environment – either in an all-people-of-colour play or, for some of the crew members, they’d literally just come out of drama school. We did what most companies cannot be bothered doing, which is to make work with empathy,” she says. “It was also really exciting to work with a group of creatives that are really thinking on the forefront of changing structures and thinking of new ways to make work.”

Bardi, Jabirr-Jabirr woman Shari Sebbens (Top End Wedding) made her theatre-directing debut with Seven Methods, working alongside Okenyo. When the stage and screen actor and Sydney Theatre Company resident director first spoke to Lee-Jones about taking the play from British to Australian audiences, the playwright said she was surprised there was interest in Australia.

“She mentioned the play had been shopped around to Australia and the US and that no one was biting, which was shocking. But it’s about to have its first American season, which is exciting.”

Okenyo adds, “Even though it’s so specifically South London, the politics in it are so relatable to so many people for so many reasons. We saw this with the success of the first season. And for those who aren’t black or brown, there’s so much for them to learn.”

Together with Green Door Theatre Company, the Seven Methods team in Australia has created a strategy to help engage new audiences and foster a community around the show. This includes bringing in live music and DJ sets on select show nights, commissioning a special edition of Flex Mami’s conversation starter cards, and hosting discussions, as well as introducing a pay-it-forward initiative that allows audiences to add a donation with each online ticket purchase, so the company can offer more pay-what-you-can tickets.

As the production comes to Melbourne and Brisbane, Maturure tells Broadsheet, “It’ll be a chance for us to experience each Black community in each city. I’m really excited to see how it’ll evolve. “We will also be able to hold the companies we are working with to account,” she adds. “We are calling the theatres to task – where are your relationships? It also makes it easier to not try to ask us if we know the Black people that live over there.”

Okenyo says, “On a non-serious level, theatre is fun. It can be fun. Right now, [theatre] is actually not accessible. It can be such an elitist space,” she says. “With Seven Methods, you saw that people were going to dinner, seeing the play, sparking conversations over drinks and, on a very basic level, just being together and having fun and being joyous and feeling heard – that’s what culture and society is about.”

Engagement and involvement of communities is a key component of the Seven Methods journey, but even more important, the directors say, is convincing the industry of the need for genuine diversity in casting and productions. “What we found is that it’s not that hard to do. Companies just have to be willing,” explains Okenyo.

For the 2022 season, the team put together an open casting call for the role of Kara.

“We saw so many incredible people from lots of different levels of where they’re at in their lives,” says Okenyo. “But the best thing with Seven Methods is that any young, black or brown woman that watches this show, they absolutely inherently understand the experiences. So everybody that came in just had such a connection with the work.”

This time around, Kara will be played by second-year NIDA student Iolanthe (who goes by one name), an actor of Afro-Caribbean, British and Norwegian descent. She’ll be finishing her third year of studies on the road as the show goes on tour.

As NIDA grads themselves, Okenyo and Sebbens are excited for Iolanthe to be fully immersed in this unique training ground. “It’s great to see [acting] institutions realise that there are absolutely opportunities and experiences that they need to tailor to students in order to address the inequity in this industry,” says Sebbens.

For Maturure, who is stepping into the role of Cleo once again, the new season is a chance to revisit some of those big questions posed by her character.

“None of the big flames that sparked in Seven Methods ever die down,” she says. “There are always embers burning. And yet there is always a part of me, when playing Cleo, saying the exact same words in the exact same order, that thinks I may find the answer.

“But mostly, I’m excited this time to find a different font or italic version of Cleo.”

Seven Methods of Killing Kylie Jenner was originally part of the Sydney Festival 2022 program. The team released a statement of withdrawal from the event as part of a wider boycott. The Darlinghurst Theatre shows are going ahead on the dates above; the previously announced Parramatta dates are cancelled.