We asked an Aussie game designer for his faves. There are brand-new games; cheeky updates on classics (including an extreme version of Guess Who with a table-tennis ball and no guessing); and free – actually fun – games you can play with mates online. 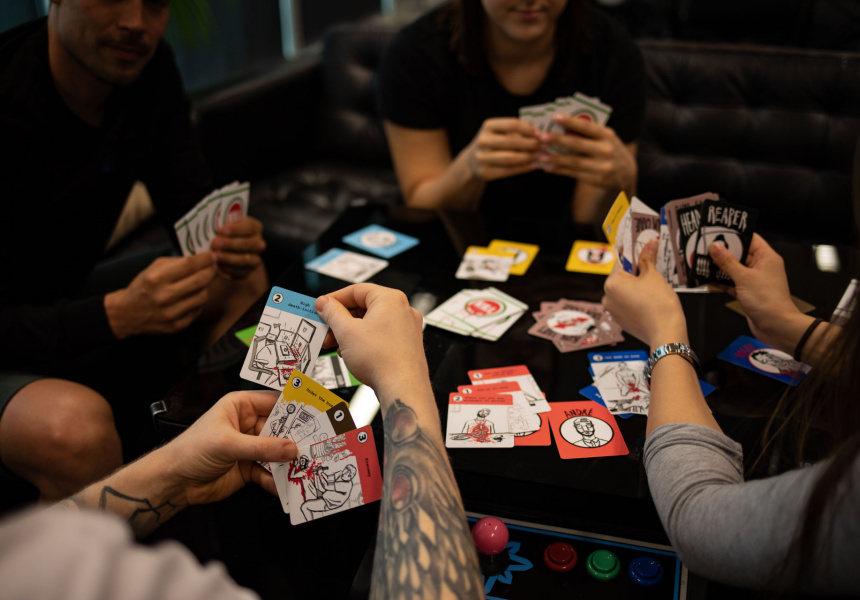 Photography: Courtesy of Kill Your Friends
1/3 Melbourne designer turned game-maker Leigh Ryan is the co-creator of Kill Your Friends, a cheeky card game about offing your fellow competitors in hilariously gut-churning ways.

With lockdowns easing, we asked him to suggest the best zero-contact games to play at your next dinner party, so you can have fun with your mates while maintaining a safe social distance. Here are his picks.

Monikers
Monikers is like Taboo meets Charades, according to Ryan. “[It has] simple set-up with a large laugh factor,” he says.

One player draws a card from the pack with a word or concept on it and gives a clue, while the others try to guess what it is over three rounds.

In the first round, you can say anything other than what’s on the card (the premise of Taboo). In the second round, you can only say one word, and the final round is silent (hence the comparison to Charades).

“The game’s strength lies in the absurdity of the cards,” Ryan says. “It’s impossible not to laugh watching your friends or family trying to act out or explain in one word ‘meat sweats’, ‘an underwear vending machine’ or a ‘Drunk Jeff Goldblum’.”

If you’re looking for a game to play on Zoom, this is a good option. “It can be played with only one person touching the deck or even via group video chat, with the game owner showing the card to one player whilst the others look away,” says Ryan.

Triple Agent
You need five to nine players for Triple Agent, which Ryan describes as a free, “app-based party game about deception and espionage”.

Each player is secretly assigned a role as either a secret or double agent for an organisation called Virus. You find out more about your competitors as the game progresses, and the goal is to uncover who’s who and capture the opposing side.

“Let the blame game begin,” says Ryan. “Best of all it’s run off a phone, so physical interaction is at a minimum.”

Operation
“Get the rubber gloves out, make some homemade face masks and scrubs, and give this kids’ classic a go,” says Ryan.

If you mastered the game as a nine-year-old and want a challenge, why not give it a grown-up twist?

Ryan suggests adding some alcohol to increase the difficulty level. “Your dexterity is really tested after a few drinks,” he says. You could also up the difficulty by playing with your non-dominant hand.

First, players sit facing each other two metres apart with their boards set up.

“Then, each player takes turns throwing the [table-tennis] ball at the other player’s board, attempting to knock down the faces,” says Ryan.

“First player to knock down all the faces on their opponent’s board wins. No guessing required.”

Pandemic
“Pandemic is a very relevant cooperative role-playing game where each player chooses a role such as scientist, operations expert or medic,” says Ryan. “Then all players have to work together to find a cure before it’s too late.”

The updated 2013 version of this board game even has a “quarantine expert” role, if that’s not too on the nose for you.

Words With Friends
The free smartphone version of Scrabble is especially good for those isolating solo.

“The beauty of [it is] games can last for hours, or even days if you just want to chime in when you and your friend have the opportunity,” says Ryan. “Nothing like a bit of one-on-one rivalry too.”

Houseparty
Houseparty functions primarily as a video hangout app, but it’s also got a bunch of games that can be played remotely.

“Houseparty is seeing a resurgence for obvious reasons,” says Ryan. “It also incorporates trivia and other games you can play with friends online.”

Heads Up (like digital Celebrity Heads) has tons of special-interest categories, including Game of Thrones, ’90s nostalgia and politics.

There’s also a word-association game called Chips and Guac, a Pictionary-style game where you draw a picture in the app, and more. Bonus: it’s free to download and play.

Kill Your Friends
If you’re feeling less fond of your nearest and dearest post-lockdown, you can “blow off some steam by killing them in the funniest way possible,” says Ryan. (Not literally.)

The goal of Kill Your Friends is to outlive the other players, either by dodging their attacks or by inflicting imaginary violence on them.

“[Rounds] are quick and are very replayable, allowing everyone a chance at revenge,” says Ryan. “It plays like an aggressive version of Uno crossed with Survivor.