When the premier Hobart winter festival turns on the red light, we go. A first week account of Dark Mofo and its many folds. 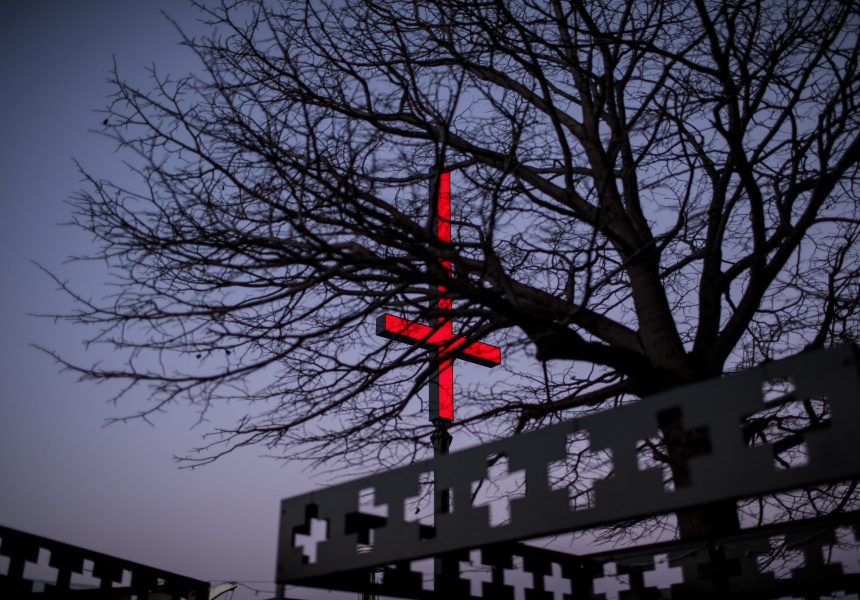 The main event at this year’s Dark Mofo festival wasn’t there. Mike Parr’s UNDERNEATH THE BITUMEN THE ARTIST was an artwork you couldn’t see, interact or engage with. On a cold and drizzly Sunday night in Hobart, when the 73-year old artist emerged from three days spent entombed in a 25-square-foot metal container – buried under Macquarie Street in the centre of the city – with nothing but air, water, a bed, a chair, books and drawing materials for company, he appeared in rude health. At 9.36pm, following careful excavation by a team of hi-vis workers to remove the lid of road that sealed him in, Parr passed up his belongings, climbed a ladder, shook hands and walked wordlessly into the nearby Mercury Building.

“Nothing to see here,” ran the Mercury newspaper’s headline the following day. Which was the point. Parr’s party trick was intended to symbolise the “burying” of Australia’s violent history, both that inflicted upon the convict masses shipped to Australia in the 19th century and the subsequent genocide of the state’s Indigenous population. But for all the history lectures, technical specifications and “what the fuck?” around the artist’s interring, its real success was its inflicting of heavy, primal emotions on the city’s inhabitants – worry, anxiety, empathy, fear and ultimately relief. Mike Parr’s UNDERNEATH THE BITUMEN THE ARTIST

It reminded me of the first Dark Mofo in 2013 when Ryoji Ikeda’s spectra beam dominated the night sky over Hobart. (Which is conveniently being resurrected out at Mona during the final weekend of this year’s festival – a bookend.) Ikeda’s column of light stood like a giant pin upon Hobart – an all-hours navigational tool as well as a late-night meeting point for anyone awake enough. Parr’s piece was its drowsy inverse. In place of the central, jubilant beauty of Ikeda’s celebration, Parr’s absence turned everything he left behind into the artwork. The connection to its colonial atrocities was knowing he was down there at all times – us while seeing shows, dancing, drinking, feasting – and yet also completely forgetting about it.

Or most did. In 2013 anyone visiting spectra at 2am was there to warm their hands and literally stare into space. In 2018 it was to time your run between traffic lights and jump on the bitumen above Parr’s head. (Which he could hear, by the way.) “If anything had’ve gone wrong,” said festival creative director Leigh Carmichael the night of Parr’s unboxing, “that’s it, the festival’s over.”

Six years in, Dark Mofo is still as good and unwieldy as everyone says it is. Being here – and writing about it – is still a Scrabble-bag of chance encounters. I stood by the 20-foot neon inverted cross towering above a car park at the afterparty, when a life-size velociraptor strode by. “Did you guys see that?” I said to friends. None did. The following night, a guy at the bar of Hadley’s Orient Hotel – where pink fluoro lights were stuffed in chandeliers and a faux-garden seemed to grow each time I looked – announced, “I was the dinosaur,” before chatting to Lou Reed’s guitar tech. Members of German industrial band Einstürzende Neubauten were trying to cajole others into joining them in their hotel room to watch Germany play Mexico in the World Cup. The theme for this year’s Dark Mofo is “time” and “incarceration” – here you give over the former to embrace the neon-red event’s version of the latter.

On Thursday night Kiwi singer Marlon Williams sashayed through a set at the Odeon Theatre that soared whenever he and his crack four-piece went dark, weird or sad – as in set highlights Dark Child, Can I Call You and a stunning cover of Screamin’ Jay Hawkins’s Portrait of a Man. Those swaggering numbers seemed to allow Williams to flex outside his tremulous croon and country influences. Seeing him on a packed dancefloor in the early AM the following night/day, bouncing in bright blue jodhpurs with a dangly earring – this take seemed closer to the guy, too.

On Friday I trooped out to North Hobart to watch James Hewitt’s 60-minute film, I Go Under Further, screening as part of his exhibition, Delay. The exhibition “ponders the perils and possibilities of escape, isolation and heading south”, a theme familiar to anyone who looks forward to Dark Mofo every June. Based on a true story, it follows a young girl delivered by a fisherman to a small island south of Tasmania where she plans to live alone. The beautiful-looking film proved a quiet meditation on the lengths people will go to for some alone time, as well as how difficult it is to actually find it.

On some days the success of Dark Mofo’s programming might be attributed solely to the incredible buildings it continues to unearth around Hobart. This year the Avalon is that find, a theatre clipped from 1920s Paris and thus far unused for any Mofos. In there on Friday Blixa Bargeld, the charismatic frontman for Einstürzende Neubauten, took a sold-out crowd through his singular universe of outlandish storytelling and sonic gymnastics. He created tunes about the solar system using nothing but looped vocals, and spent time ruminating on his Apple watch and genetic experiments, all with a dripping dry cool that showed him to be as much laconic comedian as noise-god. Running from Blixa to St. Vincent wasn’t kind to St. Vincent. Where Bargeld’s universe seemed to spring from sonic curiosities and the scars of his actions and experiments, St. Vincent’s icy pop-persona scans like artifice without proof of why it exists. Appearing alone on stage with just a guitar and backdrop for props, Annie Clark is awesome but St. Vincent’s overcooked pop music is the weakest link. Her show felt like watching an exotic fish swimming around a tank that’s slowly leaking.

That sense was compounded by the weekend’s other musical headliners doing big business. On the freezing waterfront, Jagwar Ma turned the Mac1 shed into a swampy, loved-up club. In the thick soup of a full house losing its cool, the trio’s Madchester qualities were reduced to massive melodies stuck on swaggering mid-tempo electronica. Every so often they steered into sticky arpeggiated techno – the kind of thing to make you forget it was pissing down outside – or that Mike Parr was still out there under the road. Of course then there was Night Mass. The festival’s annual afterparty shifts from precinct to precinct most years, and as with some of those moves the first night was not easy. “I feel like they should just make it more fun,” said one friend after basing where we might go on where the shortest line to get in to one of the four venues might be. It meant missing out on the bunker-like techno club in a decaying cinema, and the picture-perfect David Lynch-themed multi-level Bang Bang Bar, a deep world-unto-itself. But with the Grand Poobah offering pussy painting, a heaving dancefloor and general nudity over in the Grand Poobah, and legit bloodsoaked hardcore wrestling in the Odeon on Saturday night, the sense something else is happening around the corner is a necessary evil of Dark Mofo. Another week should do it.