These are the tools and tactics that Kim Nguyen, vice president of the Australian Jigsaw Puzzle Association, uses to train for the World Jigsaw Puzzle Championship in Spain, where she’ll be representing Australia. 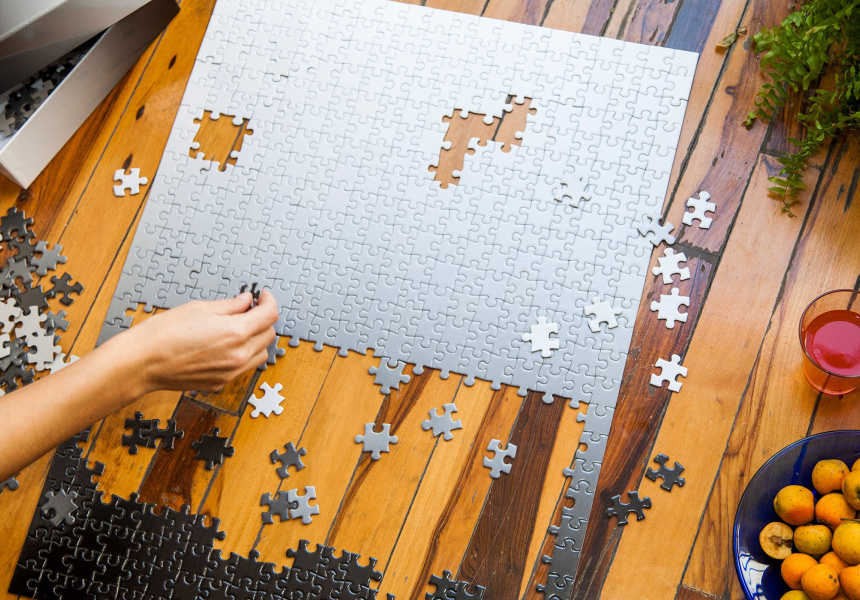 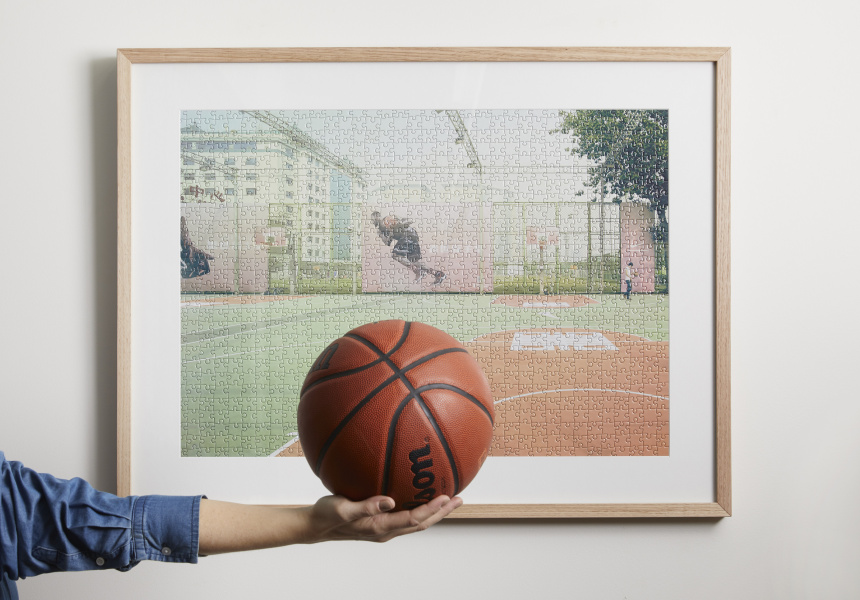 Every year in September the best jigsaw puzzlers in the world descend on Valladolid, a mid-sized city in north-west Spain. They’re there to compete in the World Jigsaw Puzzle Championship (WJPC) (which we’d never heard of either), and last year an Australian – D’arne Healy – took part for the first time.

Back in Australia, fellow jigsaw fanatic Kim Nguyen was looking to start a competitive puzzle association. Nguyen’s well qualified: she can finish a 500-piece puzzle – the standard competition piece-count – in just over an hour (last year’s world champion did it in 46 minutes). She got in touch with the WJPC, who told her that D’arne was also interested in founding a club for Aussie puzzlers of all skill levels. At the end of 2019 the Australian Jigsaw Puzzle Association (AJPA) was born.

Then something strange happened. The coronavirus pandemic changed the world. Twenty per cent of the world’s population went into lockdown and began to cook sourdough, learn embroidery and otherwise find time-killing distractions for isolation. Our prime minister even named jigsaw puzzles an essential item.

Since March, interest in jigsaw puzzles has spiked and sales have skyrocketed. Now completing jigsaw puzzles – a hitherto niche activity, confined to rainy days, blackouts and lazy school holidays – has become a mainstream, even aspirational, pastime.

But puzzling isn’t as easy as it looks. Many of us have purchased jigsaws of ambitious piece-counts (1000 is not a good place to start) only to find ourselves stumped. So we asked Nguyen, now AJPA’s vice president, for a competitive puzzler’s top tricks and strategies for conquering puzzles at home.

Even if you really like the image on a puzzle (let’s face it, that’s how most of us pick them), make sure to factor in piece-count.

“It’s deceiving, because when you look at a picture you’re like, ‘That is such a pretty picture, let’s do that one.’ But when you actually get started it’s so overwhelming,” Nguyen says.

So what’s the ideal piece-count for a beginner? “Definitely 500 pieces, because it’s not too little, not too big.” It’s the Goldilocks-zone: 250 will make you feel like a child, but 1000 is too ambitious by far. (And 500 pieces is the WJPC standard.)

Don’t worry if you’ve bitten off more than you can chew – even the pros do it sometimes.

It recently took Nguyen, for example, about 72 hours to finish a jigsaw – her biggest ever – while in isolation. Disclaimer: it was 4000 pieces and featured a picture of Noah’s Ark with all the animals.

Pick a puzzle brand and stick with it

It’s tempting to go straight to an op shop to pick up a chintzy puzzle or two – and that’s absolutely a great way to dip your toes into the puzzle pool, but the pieces can often be frayed or missing. You know that uber-satisfying feeling that comes from the tactile click when you slot two puzzle pieces together? The best way to get – and amplify – that sensation is to buy a new, high-quality puzzle from a good brand. Nguyen’s pick is Ravensburger, the pinnacle of the puzzle world – “I will always suggest them because of the quality: when it clicks together, it’s got that nice fit to it.”

“I’m quite picky – I want to open a brand-new puzzle,” says Nguyen. “I want that feeling. Just ripping off that clear plastic first, and knowing that you’re the first person to touch it. I just love that.”

Plus, every puzzle brand cuts its boards a little differently – which is actually pretty important. But more on that later.

Create some space, then study your picture

“Make sure you don’t have anything else on the table,” says Nguyen. “Just the puzzle.”

Jigsaws devour space. To do one effectively, think about how much space you’ll need for it – then double it. That will give you enough of a buffer to move the pieces around effectively, which is at the core of efficient solving.

Once you’ve got your allocated space, “take a good look at your picture, it’s really important,” Nguyen says. “Over time, puzzles will improve your short-term memory.”

This piece of advice may seem fairly obvious, but it’s skipped over all too often. It’s good practice to study that image intensely – in time, the mental effort will improve your puzzling immeasurably.

Multitask: flip your pieces and go straight for the borders

“Pour the puzzle out on to the table, pull everything out and then start flipping all the pieces picture-side up,” says Nguyen.

While you flip, it’s important to multitask by isolating the puzzle’s border pieces on one side, with the ‘filler’ pieces on the other.

“After you have everything flipped I like to start on the border straightaway.”

(If you’re puzzling at an internationally competitive level, you should have the entire frame of your puzzle set up within 10 minutes.)

Sort the remaining pieces into groups

Next, divide and conquer. Organise your pieces into chunks. A 400-piece mess is daunting, but four 100-piecers? That’s manageable.

“After I finish with the border, I go straight to sorting the pieces into groups,” Nguyen says. “You want to be able to sort as many groups as possible – let’s say there are four different things, like flowers and trees and ground and sky. Separate them into colours and patterns as much as possible.

Once you’ve arranged your pieces into groups, the only thing left to do is focus and try to put the thing together.

Fun fact: jigsaw puzzles have never actually been made with a jigsaw – they’re made with a puzzle press. And although there are industry standards, each company uses its own unique press.

Remember how we mentioned that it’s important to pick a brand and stick with it? Here’s why.

“Every brand cuts its shapes differently,” Nguyen says. And just like Chicken McNuggets, puzzle pieces have a set number of shapes (each brand has “about five to six”). And if you can memorise those shapes – and the way they go together – you can seriously speed up your puzzle completion time. Especially when you’re solving the hardest parts of the puzzle.

“For example, if you’re working on a sky and it’s completely blue, it’s just one colour and you can’t even rely on patterns,” says Nguyen. “That’s when you’ve got to start relying on the shapes. Sometimes you can say, ‘Ok this piece will definitely have to fit with this other piece.’”

So if you want to get really advanced, learn your brand and its shapes.

How to solve a puzzle as a group

If you’re isolating with a partner, housemate or family member, you may have decided that solving a puzzle together would be the perfect way to pass some. If you’re going it together, all of Nguyen’s tips still apply but she has an additional one – pick a side and stay there. (This is something she picked up while training with her sister – they’ll be competing in the pairs category at the WJPC if it goes ahead this year.)

“We’ll allocate tasks for each other, like ‘I’ll work on the border first while you’re flipping everything and moving all the parts to where they need to be.’”

Find what works for you

Nguyen’s tips provide a good education in the fundamentals. But over time you’ll develop your own quirky ways of nailing a jigsaw. Part of the fun is learning the singular ways in which your brain solves problems. And it can be a great way not just to kill time but to decompress.

“It’s a stress reliever for me, because you really focus on that one thing – which is to put all of those pieces together to form that one picture,” Nguyen says. “And when you do hit that, you feel so satisfied.

“I think it will become pretty addictive for some people after this.”

Interested in joining the AJPA? Check out the Facebook group here: it’s a great way to share your progress and keep yourself accountable. In November, if we’re all allowed to gather again, the AJPA will hold a championship to look for the best competitive puzzler in Australia. The winner gets a trip to Spain to compete in next year’s WJPC, plus they get a free trip to Germany to visit the Ravensburger factory. More information here.