The Best Food Shows, Films and Documentaries on Netflix Australia

An unconventional doco involving a “meat ballet”; a Korean reality show that hauls celebrity fridges into a studio for interrogation; and first-person narratives from the perspective of a taco. There’s more to the ‘flix than Chef’s Table. 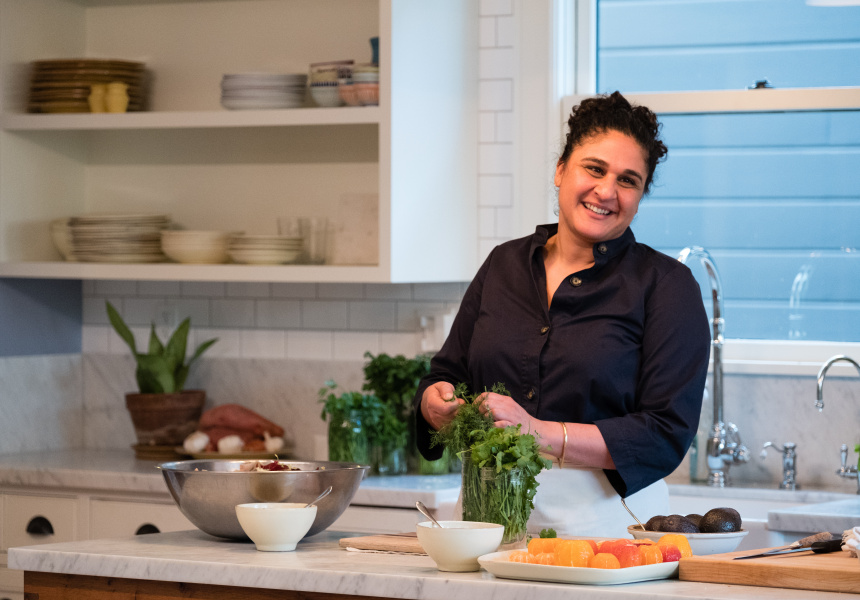 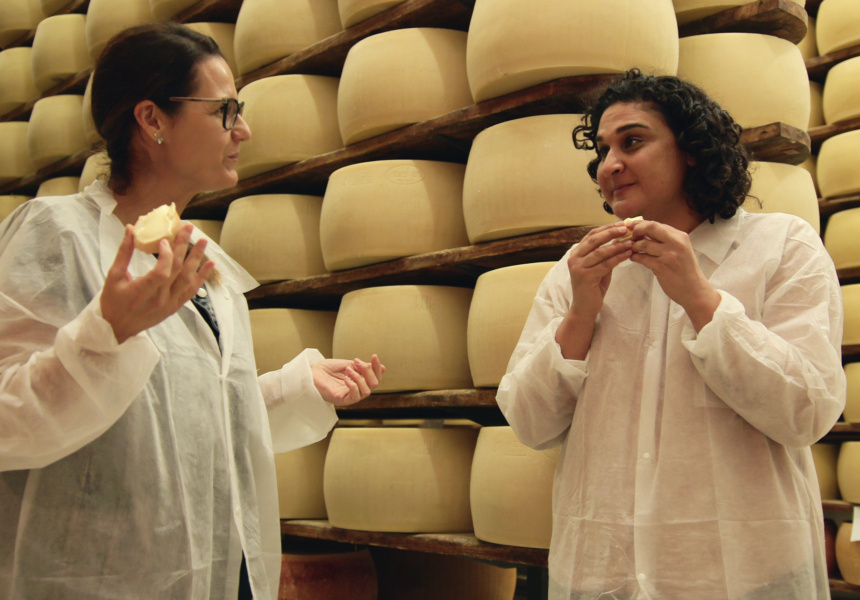 Netflix has a reputation for great food programming, which kicked off back in 2015 with Chef’s Table, a slick, cinematic and critically acclaimed documentary series.

But there’s more to the ‘flix than stories of creative genius in the food world. And while there are plenty of best-of lists online, many cater to the US service, which has slightly different programming to ours in Australia.

From shows led by big names, to quirky, lesser-known films, here are our fave food docos and dramas streaming now on Aussie screens.

It also deviates from the standard foodie travelogue – Nosrat’s natural and uncontrived delight in both the science of food and the joy of eating is refreshing, and many of the chefs and producers interviewed are women.

With an intricate focus on precisely what makes food taste good, this is instructive viewing for ambitious home cooks, too.

Todo Sobre el Asado (All About Asado)
This unconventional documentary explores asado – Argentinian barbeque – through interviews between comedian Carlos Alberto Álvarez and an eccentric parade of men who wouldn’t be out of place in a Christopher Guest film.

There are predictable discussions about the origins of asado, the best cuts of meat and cow pedigree, but what’s more interesting is the film’s exploration of the culture of machismo that accompanies it, and how the butchers, musicians and steakhouse owners we meet think about gender. They have strong and often conflicting views about what it means to cook barbecue – and to be a man – in Argentina.

Another high point: artist Carlos Herrera performing a “meat ballet” with a steak inside a cardboard box. It’s a refreshing break from food documentary conventions, though it may not be great viewing for vegetarians.

Chef & My Fridge
This Korean reality series takes a hybrid format: talk show meets cook-off. A celebrity guest has their entire fridge delivered to the studio, and a panel of chefs compete to make the best dish out of its contents.

In the first half of each episode, the bowtie-clad hosts inspect the contents of the guest’s fridge for the voyeuristic delight of the audience. A busy actress has old bags of liquified salad, a pro gamer owns nothing but kimchi and soy milk, while K-pop star G-Dragon’s fridge is stuffed with caviar, foie gras and fist-sized fresh truffles.

The chefs then have 15 minutes to make the best dish they can. Cooking scenes are frenetic and fast-paced, and peppered with reaction shots, animated pop-ups and commentary. The chefs turn out appealing dishes despite being heckled by the hosts, guests and other chefs.

Sour Grapes
In the early 2000s Rudy Kurniawan, a young man from Indonesia, suddenly appeared in the world of high-end wine collecting, outbidding industry veterans and snatching up the most desirable vintages. Out of nowhere, he cornered the market in rare burgundies, contributing to a pre-GFC speculative wine bubble.

That all came to a shock ending when Kurniawan was revealed to have sold some $35 million in counterfeit wine to other collectors in the scene he’d so effectively infiltrated.

This documentary shows how Kurniawan was exposed and features interviews with collectors, consultants, private detectives and the FBI. But the real story isn’t the con. It’s an exposè of the incredible greed and pomposity of the world of fine-wine collectors, whose joyless swagger is laid bare.

Visit billionaire Bill Koch’s collection of 43,000 untouched bottles, and go behind-the-scenes with the self-styled Angry Men, who gather to drink hundreds of thousands of dollars of wine at bleak dinner parties.

If you’ve ever considered a $30 bottle of wine a splurge, it’s a guilty pleasure to watch the one per cent get spectacularly duped into drinking – and praising – knock-off frankenwine.

Chef’s Table
There’s a reason Netflix’s groundbreaking food show has been running for six seasons. Its slick, cinematic storytelling approach has spawned a host of imitations. Directed by Jiro Dreams of Sushi’s David Gelb, Chef’s Table is both fascinating and visually spectacular, focusing intensely on what drives those at the peak of their profession.

With striking shots of intricate meals being plated and a powerful classical soundtrack, each episode heroes a single chef, tying their personal narrative and history together to present a food philosophy.

Midnight Diner: Tokyo Stories
This charming, slow-paced fictional series from Netflix Japan takes place in a tiny 12-seat late-night diner where the enigmatic chef and owner, known only as Master, prepares whatever meal he has the ingredients for while acting as a pseudo-counsellor to various eccentric regulars.

Everything looks delicious, but the food is really just a catalyst for storytelling. Each episode, a meal provides the jumping-off point for a sentimental short story about one of the patrons.

In “Umeboshi and Plum Wine”, local grocery owner Yoichi’s order of salted plums leads to a story about loneliness, his mother’s ghost and her collection of vintage erotica. These whimsical, self-contained stories make for perfect comfort-viewing.

Taco Chronicles
Each episode of this slick documentary series explores a region of Mexico through its associated taco. It’s polished and cinematic, with lots of slow-mo close-ups of sizzling pans, flashy knife-work and vegetables dramatically catching the light, so it hits a lot of the same beats as Chef’s Table, but it’s the subject matter that sets this show apart.

There are interviews with chefs, critics, writers and historians about the history and culture of each region, and there’s also occasionally a slightly unconventional first-person narrative from the perspective of the taco.

Nailed It
Nailed It takes one of the best parts of other, more earnest cooking shows – that moment when things go horribly wrong – and runs with it to the exclusion of everything else.

In each manic half-hour episode, amateur home-bakers attempt to recreate complex novelty cakes with predictably amusing results. For them, the challenges – such as an ice-cream-covered boom box or a Moby Dick-themed cake complete with Rice Krispie whale – are basically impossible.

But the viewing joy comes from the reveal, when we see how different the finished products are from the contestants’ intentions. Comedian Nicole Byer and pastry chef Jacques Torres are delightful hosts, making fun of their guests in a way that’s funny without being mean-spirited. You’ll be surprised by just how many ways someone can ruin a dessert.

Street Food Asia
Chef worship abounds in food TV, but in the past we’ve seen purveyors of street food treated differently, some left nameless in the background while the host rhapsodises about how delicious and cheap their product is. Street Food Asia is different, putting the people who run revered street-food stalls at the centre of the narrative.

Each episode covers a different city and a handful of its famous street-food dishes, spotlighting one chef’s story. In Osaka we meet Chef Toyo, whose famed carpark izakaya attracts crowds. His theatrical blowtorch cooking and risqué humour are as appealing as his signature scorched tuna belly.

But when Toyo speaks about his childhood – and his dream of growing up to have a family – it’s a poignant reminder of the factors behind the much-romanticised street-food industry, such as poverty and powerlessness. The people we meet are icons – such as Bangkok’s Jay Fai, whose noodles earned her a Michelin star – and it’s surprisingly emotional viewing, even though many of stories have heart-warming endings.

Ugly Delicious
Part of the ever-expanding Dave Chang media empire, the acclaimed Ugly Delicious is back for a second, shorter season, but the hallmarks of season one remain: fun animations, punchy editing, cute clips with celebrity guests, and swearing – lots of it.

Season one was all about universally loved foodstuffs – fried chicken, pizza, dumplings, tacos – and worked as both an ode to gluttony and a meandering exploration of global food culture. In season two, Chang again travels the world with a posse of buddies (actors, writers and chefs), musing on kid-friendly food, the meaning of “curry”, and why steak is associated with prestige (he visits Sydney for that episode).

Chang is charismatic and entertaining, but he still pushes his celebrity and chef guests into progressive discussions about appropriation and food history. His spin-off series, Breakfast, Lunch & Dinner, is more ambling and conversational, and feels like a step down in terms of entertainment.

For more food-centric entertainment, check out our favourite food-focused podcasts.