Aftertaste, the New ABC Comedy About a Cancelled Chef, Is One of the Best (and Funniest) Aussie Shows of the Year

In a post #MeToo world, should an angry white man be able to get himself out of the cultural sin bin? Plus, there’s delicious food, beautiful SA scenery and Erik Thomson swearing at an emu. 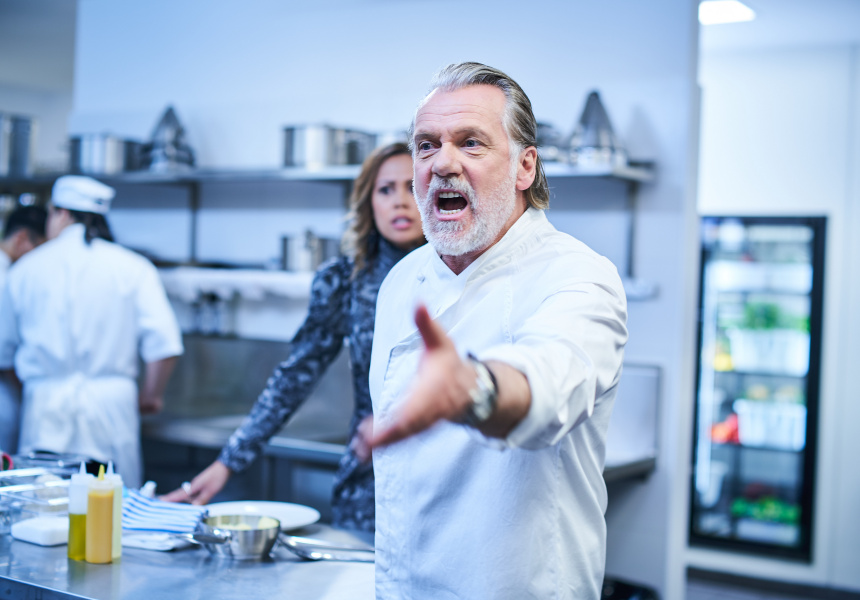 “Someone said to me early in my career: ‘Be careful who you abuse on the way up, because you never know who you’ll meet on your way down’,” says Erik Thomson. “That’s what everyone has to deal with. You make your choices in your life, you treat people in certain ways – it’s very hard to change.”

Thomson – who you’ll recognise from shows such as Packed to the Rafters and 800 Words – stars in the ABC’s new comedy, Aftertaste, as Easton West, a disgraced celebrity chef who’s returned home to Adelaide on the hunt for a comeback – and maybe a bit of redemption. Easton wasn’t careful on his way up, and he’s now definitely on his way down.

Easton is one of Australia’s greatest culinary exports, with a galaxy of Michelin stars and Nigella Lawson on speed dial. He’s also an egomaniac, a proud sexist and a casual racist – with a body-shaming habit added in for good measure.

In other words, he’s the archetypal bad-boy celebrity chef, hopped up by the kind of machismo and anger that propelled the likes of Gordon Ramsay and Marco Pierre White to stardom in the ’90s.

He’s not based on any one person, but everyone’s met an Easton at least once.

“We all recognise this man,” says Thomson. “Yes, this man’s in the food industry in [Aftertaste] – but this man is in every industry.”

If you were playing cancel bingo with Easton, the game would be over within a few sentences. And when we join him at the start of Aftertaste, he’s well and truly been tossed into the cultural sin bin. His latest controversy – involving abusing and slapping customers, and smacking a pig’s carcass (sliced lengthways, King Solomon-style) onto a food critic’s table – finally proves to be a bridge too far.

So Easton retreats home to Uraidla, in the Adelaide Hills, to lick his wounds, plan his next move and lay low with the family he neglected for 30 years. But the people he cast aside on his way to success – his widowed father, the sister he abandoned, the chef he racially demeaned – haven’t forgotten, and they’re not about to forgive, either. It’s only his niece Diana, brilliantly played by Natalie Abbott, who takes the time to get to know the uncle who never bothered to meet her.

Diana, fresh out of high school, is a preternaturally talented pastry chef. She’s inherited her uncle’s instinct for food – without his penchant for abusing everything with a pulse. But her cake stall Hot Buns is languishing, and she’s feeling the pressure to pack it in for uni.

Easton is her ticket out: a celebrity with deep connections in her dream industry. And for Easton, Diana is a lifeline – a young chef he can partner with to prove to everyone how remorseful and woke he is. It’s a complex relationship that provides the series with its emotional core. They’re both using one another, but who’s going to end up getting more out of the deal?

And do these men even deserve forgiveness? That’s the other thorny question that Aftertaste asks. In the first episode, Easton visits the restaurant of a chef, Ben Zhao (Remi Hii), who he once fired by telling him he “would never be anything more than a small-town Chinese cook”.

Now Ben – and his eponymous restaurant, Zhao’s – is the toast of South Australian dining. And he has some advice for Easton.

“This is about your whole career,” he tells him. “Bullying, abuse, sexism, generally being a dick – you’re going to need to take some time to find a new narrative or something because people are over the angry white guy shtick.”

“It’s not a shtick,” replies Easton.

“Then people are over you,” says Ben.

Thomson’s unsure as to whether Easton is worthy of redemption, and he wouldn’t commit to saying whether or not he gets it by the end of the six-part series.

“If you’ve got 30 years of your life invested in being a certain way, and if you are cancelled, and all you know how to do is cook – it was your whole world – how could you possibly start again? How do you turn around at that point?

“It’s all pretty fresh, this kind of culture of calling these guys out – hopefully it’s not just a fad. Hopefully it will have some long-term effects. It might take us 10 years, it might take us a generation or two, but it’s happening.”

Easton’s love for food – and feeding others – is his saving grace, and it might be his ticket to feeling genuine remorse for his actions, rejoining his family and even making a professional comeback.

All that said, Aftertaste is above all a very, very funny show. Not just smile-while-you-watch entertaining – you’ll laugh audibly and frequently. Its important themes never get in the way of it being delightfully silly and vulgar television (like in episode one, when Easton tells an emu – plopped in front of his car – to go fuck itself).

It’s also just beautifully shot. The Adelaide Hills’ lush, undulating vineyards are given a gorgeous spotlight, and nearby Kangarilla – on the northern tip of the Fleurieu Peninsula – is the moody, misty setting for many of the show’s key moments. The food and cooking, meanwhile, wouldn’t be out of place in an episode of Chef’s Table. Keep your snacks at the ready, Aftertaste will make you hungry.

Aftertaste airs at 9pm on Wednesdays on ABC. Stream the series here.