It posts pictures of the dogs that come through Covid testing sites. It’s the wholesome content we all need in these rough times. But it’s also keeping frontline workers’ spirits up while they pull long hours in high-stakes jobs. 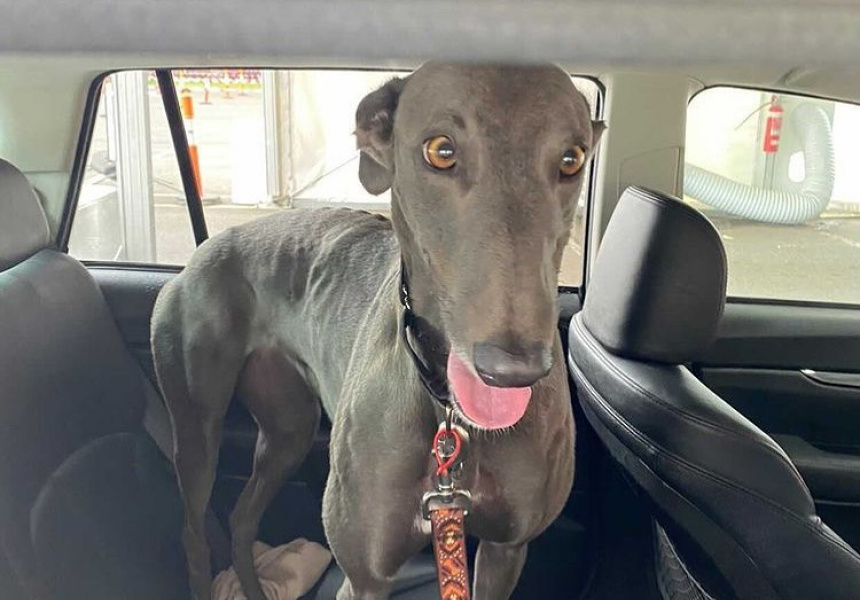 When Broadsheet speaks to pathology collector, traffic controller and person behind the Swab Dogs Instagram account Tiffany White, it’s her day off and she’s in bed. She had her second Covid vaccination the day before after 10 straight days of 12- to 14-hour shifts at a Covid testing station in inner Melbourne (she can’t say which), and she’s not feeling so great.

@swabdogsofinsta is an Instagram account dog-umenting the array of canine companions that drive through Covid testing stations with their humans. It is also what the group of nurses, doctors, pathology collectors, paramedics, DHHS staff and traffic controllers who worked at a particular Covid testing station in inner Melbourne over Christmas and New Year 2020/2021 call themselves.

“Everyone working at this particular site bonded very tightly, because we were there six days a week,” says White. “And as a result we call ourselves the Swab Dogs. All the people who were involved in that particular drive-through pop-up are called the OG Swab Dogs now.”

The dogs bring joy to the frontline workers and, it turns out, to 11,100 followers of the account from around the world. “The very first dogs were a 14-week-old border collie – she’s the second post. And the black and tan kelpie who literally climbed out of the window to give us a hug.

“So many of the dogs do that. Particularly the ones training to be service dogs. They literally throw themselves out of the car because everyone here is so in need of a cuddle. And they know it. That’s what dogs do,” she says.

When @swabdogsofinsta started it was a way for the team to get through long days wearing full PPE in 40-degree heat inside a plastic outdoor marquee. But it’s become so much more. “Swab Dogs keeps us all sane,” says White.

“Everybody will stop and talk to the dog. That’s why we started this page. So that we would have something to look forward to.”

White says the OG Swab Dogs (the humans) have now been scattered throughout the state’s Covid response. “Some nursing staff and paramedics have gone back to Ambulance Victoria or gone into the vaccination program (“Jab Dogs”). We’ve had quite a few staff go into the hotel quarantine program.” They all send in photos of the dogs they encounter in their day jobs keeping Victorians safe.

“We’re getting pictures from swab sites in Adelaide and Brisbane too now. And more than 50 per cent of the people who follow the page are from overseas or interstate. So it’s not just Melbourne that is benefitting from this. But I think we need it the most,” says White.

White reckons people bring their pets through the testing stations because in lockdown times our animals don’t like to be left alone, and it’s an extra outing for them when leaving the house is restricted to just once a day. But she suspects it’s also for the support they give. “So many people have pets they don’t realise are service animals for them,” says White. “That’s why they bring them.”

White herself has a pony called A, a 10-year-old kelpie called Spud, a 12-year-old cat called Cookie and a three-year-old border collie-kelpie cross called Chipper, whose furry mug stares down the barrel of the Swab Dogs Instagram account photo, ears alert. “He’s not really a mascot, but he’s incredibly photogenic and handsome,” says White.

When you realise what a day’s work at a Covid testing site involves, it becomes even clearer why a doggo drive-by is such a welcome distraction. White’s shifts are long and busy. And the stakes are high.

“I take the swab. But that’s only one part of the job,” says White. “The tent is such a dynamic space, especially when it’s incredibly busy. You’ve got anywhere up to 25 staff on-site.”

She explains that the traffic controller manages more than 500 cars at a time sometimes. And there are three or four doctors, who speak to every patient after a nurse has triaged them through with a QR code. “Nurses ask patients a series of questions in relation to their exposure sites etc. Because we’re getting real-time information from these people coming through we quite often see patterns of where people have been and all of it goes into clinical notes and that goes back to DHHS and contact tracers. It’s not just sticking a bit of plastic up someone’s nose.”

The pathology collectors triple-check IDs, write labels for the tubes with information from the QR code (“so that a human is checking to make sure it’s the correct sample”). Then either a pathology collector, a nurse or one of the paramedics will collect the swab. “Then people drive off on their merry way,” says White.

“We can have up to three people sitting at the table processing tubes and labels and three or four staff swabbing at once. So when we get a really good flow going, we’re seeing a patient every two minutes. It’s pretty full on.”

And at some point in the process, a snap of the doggo in the car is taken. “And trust me, you get priority treatment if you have an animal in the car,” White says.

White says where she works now is best-case scenario, considering. “The pop-up tents are the safest places to be. We’re not indoors, we’ve got minimal contact with patients. A lot of the sites are set up in areas where there are birds and kangaroos. And dogs make it brighter.”