Opinion: We Need to Be Including First Nations Country Names in Postal Addresses A campaign is underway to see Australia Post and the federal government use traditional Indigenous Australian place names as part of official address information, and it’s gaining traction. Campaign organisers are also encouraging people to become accustomed to using the names of Aboriginal and Torres Strait Islander nations in postal addresses.

The campaign’s creator, Gomeroi woman Rachael McPhail, said in an article for the ABC, “I’d love to see Aussie businesses, universities, banks, MyGov, Paypal, Startrack, Uber etc asking people for the traditional place name as part of the address information when people are filling in the forms or going through the online checkout.”

Acknowledging the Traditional Owners of the land is a great gesture, but could it be bigger than that? A way to push this nation forward into a place where Aboriginal and Torres Strait Islanders feel represented?

In early 2020 a study was released demonstrating the existence of unconscious bias against Aboriginal and Torres Strait Islander people in around 75 per cent of the population. The study was conducted by academics from the Australian National University, with data taken over a 10-year period from more than 11,000 subjects. The finding, according to study author Siddarth Shirodkar, was that “implicit or unconscious bias toward our First Australians is not imagined”.

So, what is unconscious bias exactly? In an interview with ABC Radio, Shirodkar explains that “[i]mplicit bias, or unconscious bias, is a person’s automatic reaction when they’re presented with a particular stimuli. For example, if a person associates more positive terms with an Indigenous face, and negative terms with a Caucasian face, they’re seen as having a bias in favour of Indigenous faces. But the reality is, 75 per cent of Australians who were tested in this — and that was over 11,000 people — displayed an implicit bias towards Caucasian faces: so, associating positive terms with Caucasians.”

And according to a TED Talk by Christiane-Marie Abu Sarah, a behaviouralist historian who studies aggression, moral cognition and decision-making, “we make decisions based on the information we trust. If we trust bad information, we’re going to make bad decisions”. And, Sarah says, we often get our information from what she calls an “information bubble”.

An information bubble consists a select number of sources that tend to reinforce your existing worldview, political ideas and opinions. Representation comes in many forms – the media, film and television – but it’s not just faces on screens. It’s also the text in an article – how is it structured? Which words are used? How does it compare to articles about people of other heritages? And what image has been placed with those words? What locations and what outfits are in the image?

The Australian media has a horrible track record with representation of minorities. Channel Seven is faced legal issues recently over a segment on Aboriginal children in which Prue MacSween announced it was time for another Stolen Generation – not that the removal of Aboriginal children from their families ever really stopped. News Corp journalist Miranda Devine has also been in the frying pan over tweets she posted about Quaden Bayles, a nine-year-old Aboriginal boy bullied for dwarfism.

On the flip side, strong and honest representation can make a huge positive impact on our sense of self. In 2018 when blockbuster Black Panther was released, Black actress Shareena Clanton organised a fundraiser to get First Nations and African children to the cinema, ensuring they could see people who look like them on the big screen. During an appearance on the ABC’s Q&A Shareena said, “It’s about ascension of blackness. It’s about empowering our next generation.”

Something as simple as seeing yourself represented, carefully and honestly, in the media, in a film, even on an envelope – it has impact. Is a simple postal address going to save society? No. But it will surely make any non-Indigenous person think twice about where they are standing, and most importantly it acknowledges our land. 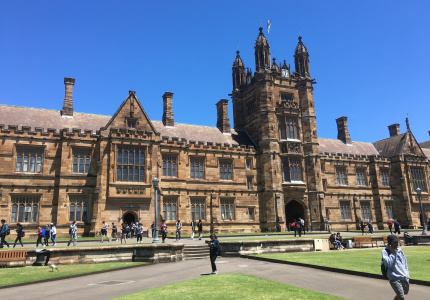