Isolation Innovation: This Aussie Family’s Dream Trip to Europe Was Cancelled – So They Held a 15-Hour Long-Haul Flight in Their Living Room

Lounge Chair Air is a sophisticated operation, with security checks, plenty of leg room and great carry-on limits. And in order to be as realistic as possible, the food is deliberately average. 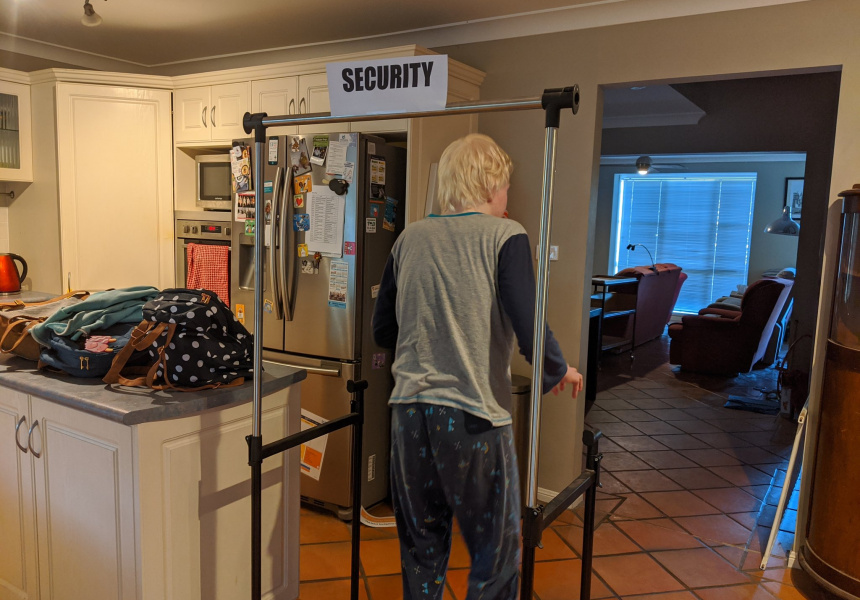 The Russell family are supposed to be on the trip of a lifetime right now. An 11-week odyssey throughout Europe filled with pasta in Florence, pretzels along the Rhine and croissants outside the Louvre.

Instead, the Russells are at home in Newcastle with little to do but rifle through their printed, illustrated and page-numbered itineraries for an adventure they should be part-way through. So parents Kirsty (a writer and speaker focusing on parenting children with special needs) and Nathan (a schoolteacher), decided to recreate the trip at home. Starting with the 15-hour flight from Sydney to Munich (with a stopover in Doha).

In late April “Lounge Chair Air” flew its maiden voyage, and the onboard wi-fi must have been pretty good because Kirsty live-tweeted the whole thing. First off, the Russells rearranged the chairs and couches in the living room to resemble a (very comfortable) cabin. Even getting the middle seat on this flight wouldn’t be a stitch up.

Then the Russell kids did double duty as ground staff and cabin crew – the youngest at check-in, the eldest running a very lax-looking customs and security gate. The middle Russell was on hand at the entrance to the living room to welcome everyone aboard – including the family’s pugs (a very progressive companion animal policy for an international flight).

Hats off to the specially printed Lounge Chair Air boarding passes, replete with QR codes and a design-scheme that throws back to the golden age of air travel. With everyone seated – no seatbelts or safety video by the looks of things – menus were handed out. Kirsty and Nathan were so committed to replicating air travel that they crafted a deliberately mediocre menu for the in-flight service, with food wheeled out on an old school trolley from the 1970s.

Highlights on the kids’ menus included toasties (“made with day-old bread and choice of quality Australian cheese”) and a “Cheeseburger Surprise” freshly cooked in the microwave. Dinner for those with allergies was “Lasagna à la Freezer”. There were cookies to snack on, and “cordial – any shade of orange” to drink.

At about the five-hour mark – somewhere over the Indian Ocean – cabin fever set in.

“The eldest has disappeared (probably searching for a way into first class) while the youngest is wandering around the cabin, chasing the companion pugs,” Kirsty reported.

As in older planes, there was also only one TV in the cabin, so entertainment was by consensus. Duck Tales won out. Eventually, the lights were dimmed for sleep time (though most of the Russells tried to push through and stay up all night).

The upside of having a long-haul flight in your house? The midnight toilet trip is a breeze – no lines, “no awkward eye contact with passengers seated nearby”.

At 7am the Russells arrived in Doha. After a swift Full English Breakfast at Hamad International Airport, they embarked on the final leg to Munich.

Lounge Chair Air’s second journey had slightly less frills than the first, with two-minute noodles the sole offering for lunch.

After 15 long hours, the Russells landed in Munich – jet-lagged but ready for a hearty schnitzel. The itinerary included pretzels (homemade), documentaries about Bavarian architecture and a virtual tour of the city of Würzburg.

They decided not to recreate the train trip from Munich to Paris, so Lounge Chair Rail may have to wait.

Broadsheet reached out to the Russell family for comment, but at the time of publishing they were having croque monsieurs in an undisclosed part of virtual France.