The Sydney-based designer’s concept for a smart lamp, table and bookshelf combination took the honours at a ceremony in Sydney. In partnership with Mercedes-Benz, we spoke to Hanna about his win and what it means. 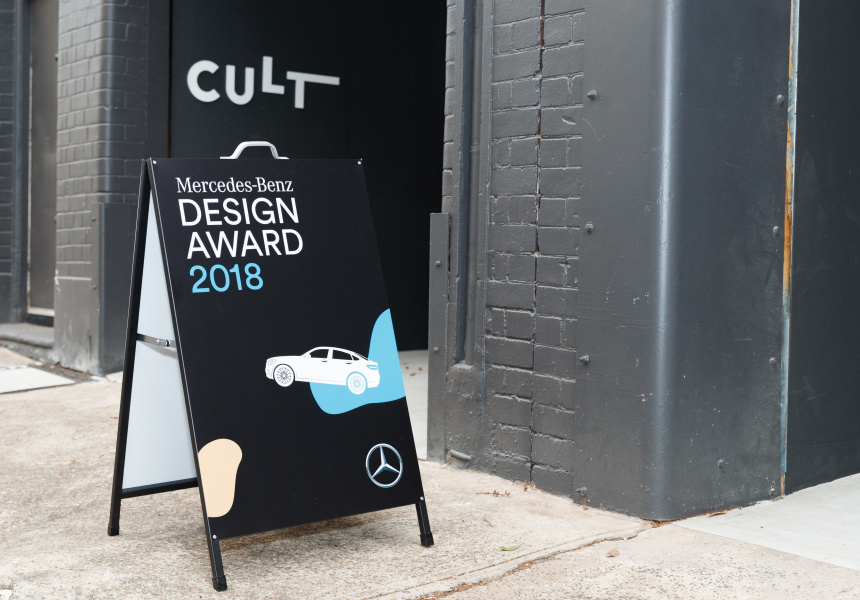 Zachary Hanna has won the 2018 Mercedes-Benz Design Award with Stack, an innovative lamp and side table design. The award was presented to Hanna by a team of judges – including last year’s winner Tom Fereday – at a ceremony held at furniture and homeware retailer Cult Design in Chippendale.

“I just want to thank everyone for being a part of this,” said Hanna when receiving the trophy, which was itself designed by Adam Goodrum and hand-crafted by Canberra-based furniture maker Rolf Barfoed. “It's really cool for someone like me, a small, young designer, to have these opportunities.”

The fourth year of the competition called for designers to conceptualise innovative and sustainable objects for the living spaces. Hanna won over a competitive group of entrants, who were whittled to three finalists by judges André Dutkowski, senior product manager at Mercedes-Benz; Katya Wachtel, editorial director of Broadsheet; Adele Winteridge, founding director of Foolscap Studio; 2017 winner Tom Fereday and Richard Munao, owner of Cult Design.

Hanna’s award-winning design, Stack, combines the functionality of several living room objects – a lamp, a bookshelf and a side table – into one simple product. The idea was praised by the judges for nailing the brief, offering a point of difference in the market and for its potential longevity.

“Zachary addresses the sustainability issue with his choice of material and lamp selection,” says Winteridge. “A clever and thoughtful product designed with empathy for the user. I definitely need this in my lounge.”

Stack was inspired by a dusty lamp on an old table at his grandparents’ house. “My grandparents had a table with a tablecloth on it, and just a regular old ceramic-based lamp with an interchangeable lampshade,” says Hanna. “Nothing in the realm of design Cult deal in. But I thought, ‘That’s a really common thing, but I’ve never seen it combined into a piece [the table and lamp together] that would fit into this kind of world. That's a cool challenge’.”

Hanna says the longevity of a product is a huge factor in its sustainability. “You see a lot of flat-pack furniture on the side of the road and it's probably because it's such an unsubstantial form of construction,” Hanna told Broadsheet after the ceremony. “Whereas with this you have beautiful, solid timber joinery. It doesn't degrade. That lends itself to not being thrown out.”

The 24-year-old designer will now work with the competition judges as his mentors to bring Stack to market. Munao will then oversee the addition of Hanna’s design to the Cult Design range, and Hanna will also receive a Mercedes-Benz to drive for the rest of 2019.

Hanna says last year’s winner, Tom Fereday, is an indication of how he would like to see his career take shape. “Ideally, I would love to do more of my own designs, similar to what Tom is doing,” says Hanna. “Working with Cult will be amazing, they have their manufacturing and distribution set up and I can just focus on the design.”

Both the judges and Hanna praised the two other finalists in the competition and their designs – James Walsh and Tom Hewitt. Hewitt’s design, the O-KI Lounge Chair, is designed to be built with locally sourced timber and features an interchangeable sling, while Walsh’s vision was a crafty range of glass and ceramic vases and water pitchers inspired by ancient Roman design. “All the judges would say we would be proud to choose any of the three designs here tonight,” said Mercedes-Benz’s André Dutkowski when presenting the award.

Hanna is excited to see his work being used inside a real living space. “It'll be the first time I've gotten to see that with one of my products,” he says. “It’ll be fantastic. That thought is so exciting to me.” And will he take it to his grandparents’ house? “They would have to [have one in their living room],” he says. “But whether or not it fits with the rest of their decor, who knows?”

This article is produced by Broadsheet in partnership with Mercedes-Benz and support from Rolf Barfoed.