These Split-Body, Two-Tone Resin Vases Are Perfect for the Indecisive Decorator

The colourful new collection, by an Adelaide designer who trained under his New York Times-featured mentor, is cleverly called Vase Versa – because each piece strikes a different colour balance depending how it’s placed. Adelaide-based designer Dean Toepfer is perhaps best known for his furniture and lighting work. But he’s been meaning to foray into smaller objects since interning in Amsterdam last year with internationally regarded designer Lex Pott, whose work has been featured in The New York Times.

In that sense, Covid-19 was a double-edged sword. While Toepfer says his commissions and studio work all but “evaporated” – he lost around 60 per cent of his income – it gave him some time to create new pieces.

Fresh out of lockdown, he’s just released a new collection of split-body, two-tone resin vases, cleverly called Vase Versa. “It’s a play on ‘vice versa’ – you can orientate them in different ways and flip the colour balance on its head,” says Toepfer. They’re perfect for indecisive decorators.

Each vase is made of two pieces of marblo – a solid-surface resin – fused together. And they come in five colour combos: a Frosty Fruit-looking melon and pink, taupe and melon, teal and red, pink and teal, and red and taupe. You can also choose between a 9.5-centimetre “bud” vase and a 20-centimetre “stem” vase, depending on your floral preference.

For Toepfer, it’s not only a new product type, but a new process. This is his first entirely self-produced collection. His practice usually relies on outsourcing external fabricators to bring designs to life, which can really drive the price point up.

Starting at $120, these vases aren’t as astronomically priced as others on the market. That’s because Toepfer designs and manufactures them in-house at his studio space in Adelaide’s multidisciplinary arts hub, Jam Factory, where he also works as a part-time product developer under creative directors Daniel To and Emma Aiston (who we visited for our Creative Couples series last year).

The Vase Versa collection is available online. Prices start at $120. 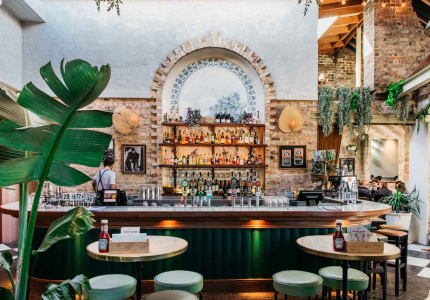