A Global Phenomenon That Retains Its Roots: Winner of Australia’s Most Prestigious Indigenous Art Award Announced

The shortlisted works transcend not just borders, but mediums, cultures and generations. And the winning artwork, painted on a single bark board, contains a complex mix of the ancient and the contemporary, the local and the global, in ways that are deeply rooted in Yolngu culture. 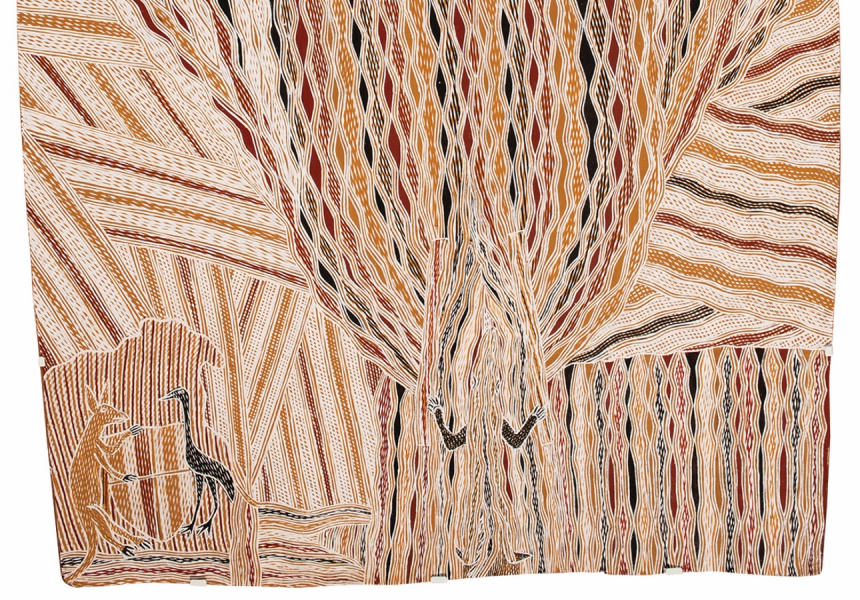 There’s a lot to unpack in Djambawa Marawili’s painting Journey To America (2018). At first the traditional elements jump out. It’s made with natural pigments on stringybark, crisscrossed with patterns used by the Yolngu people, and references deep ancestral traditions. But on closer inspection, it goes beyond the traditions of country. At the top of the painting is the Statue of Liberty.

Journey To America (2018) is the winning entry in this year’s Telstra National Aboriginal and Torres Strait Islander Art Award (NATSIAA). It’s currently on show at the Museum and Art Gallery of the Northern Territory in Darwin, along with the 67 other nominees.

The painting tells the story of Marawili’s travels from his home in Yilpara in Arnhem Land to the United States, where he’s a frequent guest of the Kluge-Ruhe Aboriginal Art Collection at the University of Virginia in Charlottesville. At the bottom of his award-winning painting, Marawili himself appears, standing in fire beside a kangaroo and an emu, holding a coat of arms. Everything between the bottom and the top of the painting represents Marawili carrying his traditions across continents.

“The world sees the kangaroo and emu, but they don’t know the real other patterns that Yolngu own,” says Marawili. “I wanted to let people see something in my deep spiritual way."

Contained in this one bark board is a complex interweaving of the ancient and the contemporary, the local and the global, all rendered wordless and timeless in ways that are deeply rooted in the intricacies of Yolngu culture.

“It took me a month and a half, because I was running around doing other things,” says Marawili. He’s downplaying his other commitments. Through various advocacy and educative roles, he’s played a huge part in Indigenous land rights, treaty discussions and arts advocacy for decades, and his artworks are displayed in institutions all over the world.

“Ten years ago if you told me the Statue of Liberty would appear on a bark painting from Arnhem Land, I would’ve had a giggle,” says Luke Scholes, curator of Aboriginal art and material culture at the Museum and Art Gallery of Northern Territory. “But here we are. Aboriginal art is a global phenomenon now, and I follow Djambawa’s travels on Instagram.”

There are six category winners among the works on show, and all of them are rich and expressive, spanning photography, collage, painting made with toner ink, sculpture, film, weaving and more. One piece is shaved into cow hide. Communication – across language, tradition and borders – is a recurring theme throughout. This is artwork that travels – not just across state borders, or even internationally, but across mediums, cultures and generations. Aboriginal art is all too often seen as one particular style or tradition, but the diversity here puts the lie to that.

Titus Nganjmirra, winner of the emerging category, is inspired by the ancient rock art from his home community of Gunbalanya in the Northern Territory, as well as images of barramundi and Mimi spirits – fairy-like creatures of Yolngu folklore. But the composition is dominated by a profile of Queen Elizabeth, similar to the one seen on Australian coins. It’s a powerful statement about culture living on through invasion.

“This is about money,” Nganjmirra tells me through a translator. “I became an artist because it was important working with my father and grandfather. When I was eight or nine, I watched my father paint on bark. The first thing I learned to draw was barramundi, and then a Mimi spirit.” In this work, both are dominated by the Queen and the Union Jack.

Many other works also show the coming together of the ancient and the contemporary, and the colonial reclaimed.

Victorian Kent Morris’s digitally-manipulated photo work Family Lines – Country has a memory (2019) distorts an image of powerlines into an ancient diamond motif. Damien Shen appropriates a 1939 ethnographic portrait of his great-grandfather in his piece Number 1812 (2019).

“The memory of my great-grandfather lives beyond the dehumanising collection of anatomical measurements and standardised imagery,” Shen says in his artist’s statement. And Seven Sistas (2018) by Kaylene Whiskey from Indulkana in South Australia depicts Cher, Wonder Woman, Whoopi Goldberg, Dorothy from The Wizard of Oz, Catwoman, Dolly Parton and Tina Turner, all painted on a gunshot-riddled road sign.

My favourite piece is by Gutiŋarra Yunupiŋu, from Yirrkala in Arnhem Land, who communicates through Auslan, Yolngu Sign Language and the international medium of film. The silence of his film work Gurrutu’mi Mala – My Connections (2019), winner of the multimedia category, speaks volumes. The artist signs the different Yolngu words for his mothers, brothers, grandparents, children and great-grandfathers. Yolngu Sign Language is an everyday mode of speech for Yunupiŋu, but it has its roots in hunting, when it’s used to communicate silently.

Right now Darwin is teeming with Indigenous art from across the continent. Up the road at Charles Darwin University Art Gallery, the annual Salon des Refusés displays dozens of other NATSIAA entries. On the waterfront at the Darwin Convention Centre, the Darwin Aboriginal Art Fair hosts stalls from more than 70 community art centres, with more than 2000 artists represented.

The National Aboriginal and Torres Strait Islander Art Awards are at the Museum and Art Gallery of the Northern Territory, Darwin, until November 3.