The Melbourne-based ceramicist creates earthy hand-thrown clay bowls, cups, jugs, plates, dishes and planters. Find out how her family’s migration to Australia from Egypt shaped her craft, and what it means to “layer” your dinnerware. 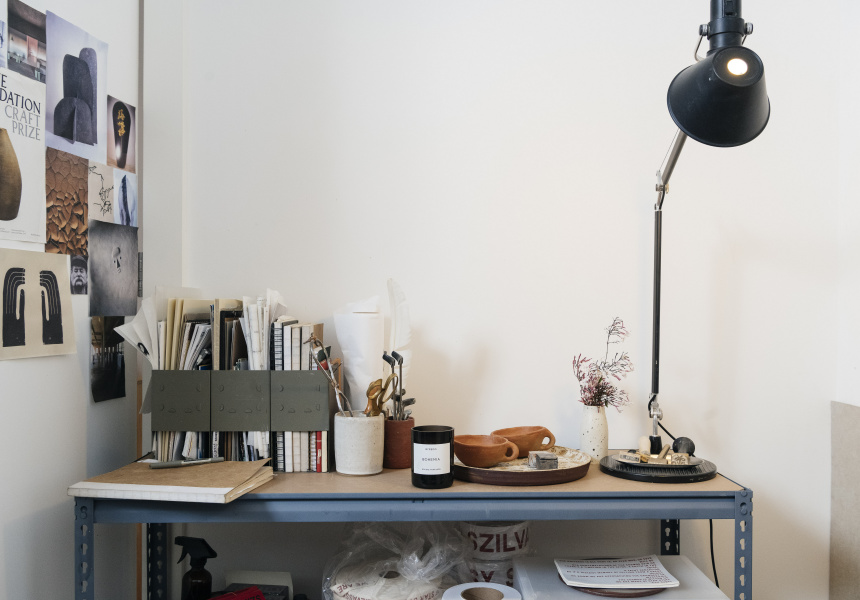 Ceramicist Shari Lowndes of Melbourne studio Szilvassy feels most at ease when seated behind the wheel in her Carlton studio, working with clay.

“I relate it to a form of meditation; it requires focused attention to a singular movement. It’s in this state I find a sense of calm,” she says.

The artist creates earthy hand-thrown terracotta bowls, cups, jugs, plates, dishes and planters. You can find her works in the 12 suites at Melbourne hotel United Places – which commissioned her to make 400 one-of-a-kind pieces using a blend of three different Australian clays – and across town at Carlton wine bar Agostino, for which Lowndes created several delicate ceramic display bowls, jugs and raw, un-glazed vases.

Lowndes grew up in the Mackellar Range area of NSW, where she’d go on hikes and explore the rainforest near her home. She remembers pocketing stones and dried leaves resembling lace from the forest floor. To Lowndes, they were works of art.

“My upbringing was magical – it was the foundation for my work. We harvested our food from the volcanic soil from a nearby dormant volcano, which meant everything grew with abundance,” she says. “And I witnessed the forest changing with the seasons. We lived simply – without technology, almost completely off-the-grid, there was no TV – so the outdoors was very much our playground.”

After being homeschooled most of her life, she went on to study at the School of Clay and Art in Melbourne. Her first ceramic work was a “very chunky, unglazed terracotta candle-holder with wonky curled legs” that still sits proudly on her mother’s mantlepiece.

Lowndes still lives and works in Melbourne. Her studio is a single-storey Victorian terrace in Carlton that backs onto a light-filled courtyard filled with cacti and succulents in vintage pots, which Lowndes says have taken years to collect. Despite the beautiful surrounds, she says “sculptor’s block” descends from time to time, but it’s what keeps her in check.

“I’ve come to learn these are necessary moments as they form well-needed introspection. I find they more easily lead to an idea, or pivot a new path,” she says.

When she feels strained creatively, she turns to literature or nature. Her family’s heritage, too, inspires a lot of her work. “It’s their stories and customs I’m beginning to include in my investigative works,” she says.

Her great-grandparents migrated from Italy to Egypt during World War II and were POWs. They left Egypt in 1952 after the coup and came to Australia, where her grandfather found work for Qantas in Sydney.

“I think one thing that always resonated with me was a sense of impermanence in relation to the idea of home or place,” Lowndes says. In light of this, Szilvassy pieces are designed to be timeless, and kept long-term. “I focus on pieces which hopefully one day become cherished as heirloom objects. Memories are made around the table ... and that can be carried onto the next generation.”

Each piece in Szilvassy’s new Aether collection – 12 functional everyday objects, from dinnerware to mugs and vases – is emblazoned with the words “we are made of star stuff”, an excerpt from astronomer and Pulitzer-winning author Carl Sagan’s Cosmos. The interior glazes use golden wattle, which Lowndes sourced from her family’s bush property in northern Victoria. The idea is to elevate ordinary rituals such as sitting down at the dinner table with family or friends.

“We must value everyday objects … even if it’s as simple as a plate, a mug, a bowl,” Lowndes says. “While they’re simple, they address intimate connections.” The way a cup is thrown and the attention to the lip of the vessel can shift how something tastes, she adds. “It alters where the liquid is directed onto the tongue and also where the nose affects flavour by smell.”

Each item in the collection is one-of-a-kind – the terracotta tone changes from piece to piece, indicating the time spent in the kiln and the clay’s iron content.

At home, Lowndes uses a base collection as her main “thematic” dinnerware, then introduces individual pieces to add texture. “I recommend not shying away from layering dinnerware – introduce a vintage piece, or something you’ve collected while travelling – tell a story.”

Szilvassy’s Carlton studio consists of two main areas – one dedicated to throwing, and another for the production of larger pieces. “Various spaces hold various energies,” Lowndes says. “The location of my wheel is very important; it has a great effect on how I work. This took first principal in how I planned out the studio.”

The wheel sits in the centre of one room, facing the courtyard, and a vintage surgical trolley houses Lowndes’ materials. Overall, the design of the space is “less is more”, because she finds vacant walls help with her observations and assessments of her work. There are a few decorative elements though, including an Achille Castiglioni Parentesi light and two timber benches made by local furniture-maker Hugh Makin.

Every day in the studio is different, but Lowndes maintains a drawing practice throughout the week. “I often start by seeing to enquiries and new orders, followed with clay preparation. On the day, wheel-throwing could include six to eight hours. The non-functional studies are often later in the week and will often roll into the weekend.”

And she’ll always put on her uniform – a boilersuit by Sydney utility-wear label Beattie Lanser, which helps her move freely with the clay.

Lowndes is working on a second series of hand-thrown functional homewares to be released in early 2020, as well as a series of non-functional sculptural works that will be exhibited in Melbourne later this year. 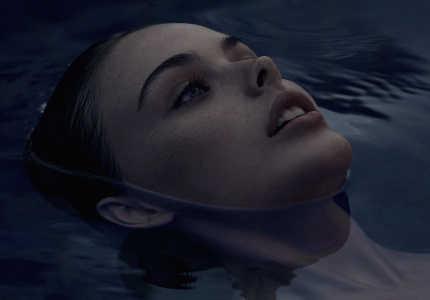 Coming Soon: Naked Bathing – Under the Stars – on a Secluded Island in the Middle of Melbourne