White brick walls are littered with subversive, darkly funny comics that Mountjoy has been publishing on social media for the last eight years. “Putting light on dark topics is a coping mechanism,” she says. 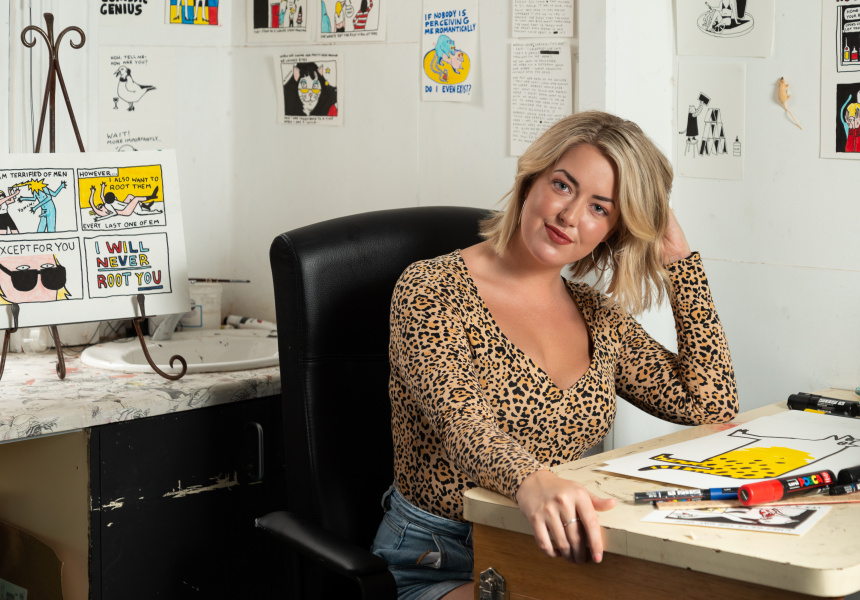 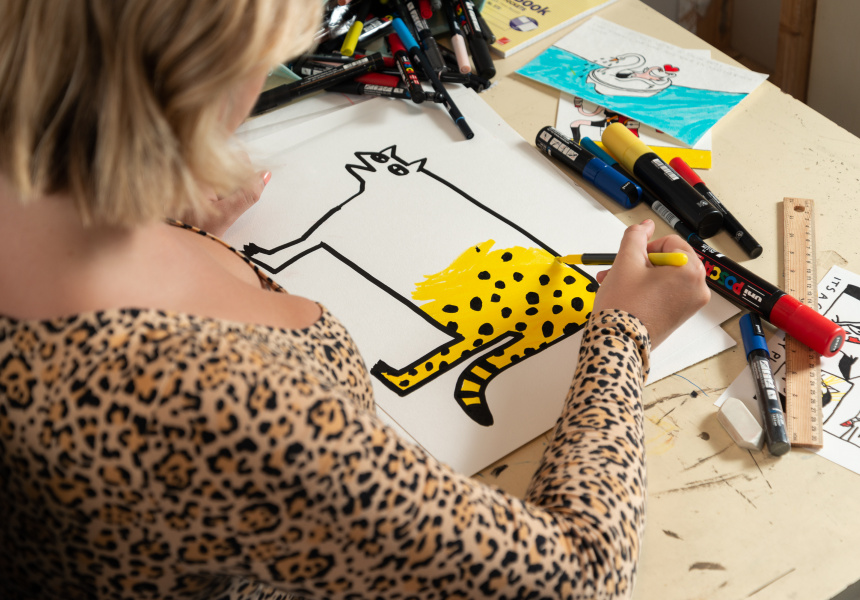 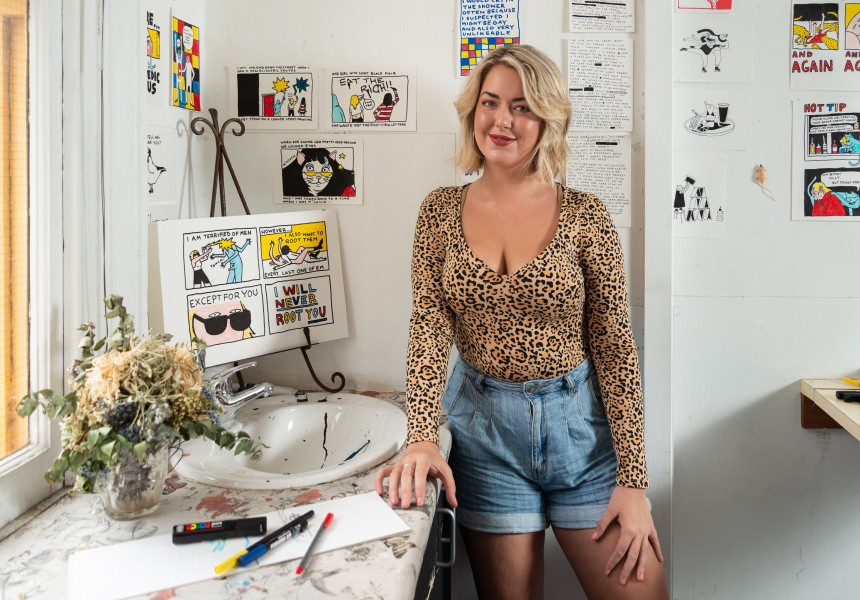 It’s 10am when we visit Celeste Mountjoy – aka @Filthy Ratbag – in her inner Melbourne studio. Sporting an aquamarine slip dress and fiery red lipstick, the 22-year-old weaves us through a dark and cluttered shared space to her own tiny studio – an unfussy, cell-like room with fresh flowers displayed on a tidy desk. The barred window catches the morning light and the white brick walls are littered with a fresh swathe of the subversive, darkly funny comics Mountjoy has become known for.

There are hand-drawn pictures of women in varying states of self-reflection; anthropomorphised male creatures wreaking havoc (or having havoc wrought on them); frogs ice skating; and Mountjoy’s bold, colourful commentary across it all in felt tip.

Mountjoy came of age around the same time as Instagram, the platform she uses most to share her art. At 14 she began posting her illustrations and comics online. By 16 she was profiled in Dazed & Confused, labelled “wise beyond her years”, and was attracting significant online attention. Now, her social media audience has reached nearly half a million followers.

Mountjoy’s fanbase has always been dominated by women, who she estimates make up about 80 per cent of her following. They’re often a fair bit older than her and seem both amused and absolved by the young artist’s savagely self-deprecating, achingly funny takes on the messy business of relationships – be they with other people, substances or themselves.

As a teen the artist says she was a thrill-seeker and a drama merchant. “I thought I was so glamorous and wild, just doing all this ridiculous shit – dating 60-year-olds when I was 16 seemed totally normal,” she says. Such experiences are reflected in her biting accounts of relationships between younger women and older men in her illustrations.

“I was terrible at school, and I wasn’t getting any validation from that,” she says. “So men, partying and booze were quite an easy option. I paid $20 for a fake ID when I was 15 and it was all over for me … at 16 I thought I was a fully formed mature woman, and no one could tell me any different.”

Looking back, Mountjoy says her initial success was something of a poisoned chalice; it gave her an outlet to process the “textbook grooming” she says she was exposed to as a teen on the internet, while at the same time attracting more of it, mostly through unsolicited DMs.

The early reception of her work helped establish her brand, but she says it also had the unfortunate effect of reinforcing delusions she had about her own invincibility and emotional maturity. In another piece on her studio wall a faceless female form, legs akimbo, is mauled by a pack of cheetahs – before crying and vomiting in the next tableaux. A completely black frame completes the triptych. “I will do this, again and again and again” reads the title.

Unsurprisingly, the rawness of her work has attracted the trolls. She says men, particularly, can get touchy about her art – both those she knows intimately, or not at all. Mountjoy says she simply ignores the comments from strangers these days, but that lovers in her life tend to have a self-censoring influence on her work.

“When I’m in a relationship, my work tends to lose a bit of its honesty or transparency, because I don’t want to hurt anyone’s feelings. Break-ups are great for creative blocks though.”

But it’s Mountjoy’s relationship with alcohol that informs some of her most unflinching and evocative work. “My relationship with booze in my work is very present tense,” she says. “It’s strange making these comics about struggling with alcoholism while actively being an alcoholic and drinking wine, taking the piss out of myself.

“I never want to romanticise it, but it’s just better to talk about it than put it in the corner.”

Like many young Australians, Mountjoy finds our prevailing cultural attitude to alcohol both perplexing and regrettable. “It’s such a cultural thing in Australia to create your identity around drinking – but booze isn’t a personality trait,” she says.

“You don’t have to be a raging boozehound to identify with my comics,” she says. Mountjoy believes “lots of women share versions of these kinds of experiences” and says adding humour isn’t flippant, it’s just frank – and most importantly, funny. “Putting light on dark topics is a coping mechanism.”

In September 2022, Mountjoy first book will be published, featuring over 100 previously unreleased drawings and comics. It’s taken over a year to complete and covers themes of heartache, grief, booze and sex. She says the debut publication “has a little storyline” but likens it more to a diary than a manifesto.

“I mean, I’d never want to call it self-help, or have it come off [as] preachy, but it’s more just like ‘we’re all in this together’, you know?

“Everyone is going through shit, and everyone has struggles that they have to cope with. I just wear my heart on my sleeve and that’s okay.”